The post-election political climate has completely saturated entertainment, from sports talk to seasonal movie awards. Curiously, one of the few niches it hasn’t penetrated is World Wrestling Entertainment programming. Not that there’s anything immediately amiss about a live-sports juggernaut serving as safe haven for late-night escapists. But per wrestling tradition – whether one harkens back to Texan grappler Jack Adkisson being recast as Nazi admirer Fritz von Erich or Japanese legend Great Muta intimidating wary Westerners with mist and mysticism – WWE has always been drawn to topical antagonist tropes. There was the early 1980s’ Iran hostage crisis, which begat the Iron Sheik. Sheik’s sometime partner, Nikolai Volkoff, was a canvas on which to project our crudest impressions of the Cold War. Several years later, Operation Desert Storm provided fertile ground for a wicked heel turn from Sgt. Slaughter, repositioned as an Iraqi sympathizer. And more recently, Jack Swagger joined forces with Zeb Colter and ostensibly sent up Tea Party extremism, while Rusev (nee Alexander Rusev) grew to infamy spouting pro-Russia rhetoric and worshipping the image of Vladimir Putin.

Shinsuke Nakamura and the New Generation of Japanese Wrestlers in America

Rusev and Swagger’s gimmicks were, it turned out, more anticipatory than spot-on. A few short years later, the two touchiest topics within and outside U.S. borders are alleged Russian interference in democratic American elections and efforts to reverse the influx of overseas immigrants into the United States. Yet, as of this writing, Swagger is rumored to be fed up with being underutilized and out the door, and Rusev – long since billed as a Bulgarian brute, his Putin patter having abated – has been jettisoned to glorified jobber purgatory alongside fleeting tag partner Jinder Mahal. It’s as if the past few months’ buildup to WrestleMania have provided a buffer between the company’s televised broadcasts and broader reality, somehow insulating the sport’s most visible promotion from an otherwise all-encompassing cultural dialog. The world might be on fire, but inside Raw and SmackDown, there are few more preeminent concerns than Randy Orton burning down Bray Wyatt’s house. 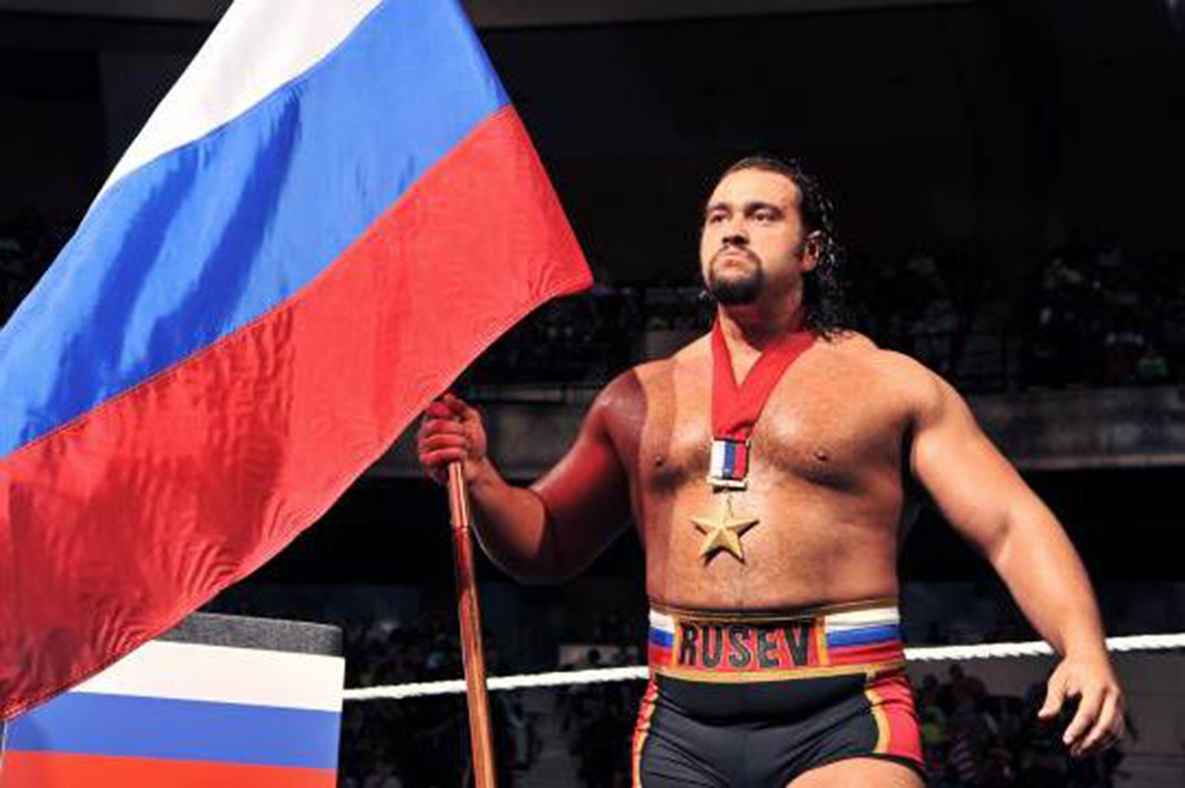 You could argue that Swagger was never a well-rounded threat, and had been creatively neutralized by a babyface turn as vanilla patriot (despite conspicuously pandering with his same “we the people” salute). And that Rusev might simply be in somebody’s doghouse, sacrificed his own aura by going public with his marriage to onscreen manager Lana, or whatever speculation stirs backstage gossip. But it hardly seems like a reach to wonder whether WWE has – despite all precedent and compelling cause – stayed out of this era’s singularly volatile political fray because of the McMahon family’s historical ties (let alone one member’s current subordinate status) to President Donald Trump.

Media outlets that don’t typically cover wrestling in any non-condescending fashion have fallen over themselves in self-congratulation for connecting the dots of WWE Hall of Famer Trump’s longstanding relationship with the McMahons, from Trump Plaza hosting WrestleMania V to the future commander-in-chief’s notorious, adversarial storylines opposite good real-life pal Vince. And when Vince’s wife and former WWE CEO Linda was appointed to head Trump’s Small Business Administration, the matriarch’s many onscreen humiliations at the hands of Stone Cold Steve Austin became instant highlight reels for cable news. But the McMahons never apologized then, nor should they now, for giving fans and shareholders what they’ve wanted all these years. Nor should having your head shaved by Donald – as Vince permitted in the name of good PPV buys – or getting fake-gut-kicked by your biggest moneymaker prohibit you from pursuing legitimate work in politics.

The question, however, is whether being formally allied with the most controversial American president in modern history (and the McMahons inexorably are, particularly given former Connecticut Senatorial candidate Linda’s $7 million in contributions to Trump super PACs) means diminishing returns for those very same customers and viewers. Or for that matter, that the company’s tying its own hands creatively. It’s a unique paradox for an organization that’s always mirrored societal mores, and attendees at Raw and SmackDown tapings have begun to fill the silence, hoisting signs both for and against Trump in the wake of his more shocking executive orders. Though up to this point, requisite “U.S.A.” taunts aimed Rusev’s way haven’t escalated into anything more pointed about his reticence to re-embrace Russia’s divisive leader. And wisely, all-American hero John Cena has spoken of his national pride in non-partisan generalities, steering clear of being siloed with Tom Brady in the celeb-athlete #MAGA ghetto.

WWE did not respond when reached for clarification on whether character development and storylines have been weighed against the McMahon family’s relationship with Trump and his administration. Though the company’s former longtime commentator and booker, Jim Ross, reasons that it’s less calculated than a sign of the times, noting that wrestling – predating and including WWE – has “always been topical when there was a war; there’s no war to talk about” and that “the past due date on evil, foreign heels has kind of expired.”

Whatever, or whomever, prompted WWE’s politically correct-ish pose, the new direction is arguably a welcome check on their mixed track record of caricaturing ethnic personas to make a point or just make headlines. Maybe it means Mahal might benefit from a push as fan favorite rather than Western foil. Or that cruiserweight up-and-comers like Iranian-American Ariya Daivari can divest themselves of stereotypical bad-guy baggage. The potentially cynical motives behind WWE’s relatively apolitical mode may, perversely, nurture a more progressive model of roster diversity. Now WWE’s only challenge is to keep us glued going forward without reaching back into its provocative past.