It doesn’t matter who you are, if you sat down and read a newspaper even once or turned on the nightly news, then there’s really no way you can say 2016 was a good year for humanity. I don’t care where you fall on the political spectrum, who you voted for or anything involving politics, because this was a year we lost so many great people and so much garbage happened all across the globe in a way that we’re crawling into 2017 begging for this year to just go away already. When we tell our kids and grandkids about this year that is almost over, there’s really no other way to put it besides saying 2016 sucked.

Yet somehow it was also one of the greatest years in sports history. So, is that how things are supposed to work?

Sorry to the 1927 New York Yankees or 1969 with the Mets, Wilt Chamberlain playing Bill Russell in the NBA Finals and Joe Namath making the correct prediction that his Jets would beat Johnny Unitas and the Baltimore Colts. The Eighties had some contenders: 1991 through 1993 could all get up there simply based on Michael Jordan and the Bulls dynasty alone. 2008 had Rafa and Roger at Wimbledon, another Lakers vs. Celtics Finals matchup and the Giants upsetting the Pats; but no, 2016 was the greatest, certainly in recent memory. It might take time for this to sink in, for every last trace of confetti to be brushed away and tossed into the dustbin, but it’s not that difficult to see that, in a year filled with so much darkness, sports gave us reason to cheer so much that our voice was reduced to a raspy whisper the next morning. That’s why we watch sports, and 2016 reminded us of that.

Kevin Durant: Why the NBA Superstar Had to Blow Up His Life to Get His Shot

Does anybody even remember John Scott playing in the NHL All-Star Game in January? Hockey’s weird as hell four-team, three-on-three, single-elimination tournament really seems like … something, not sure what exactly that is. Yet Scott, the 6-foot-8 winger, who was probably best known until this year as the massive human who beat the hell out of a lot of other hockey players, was one of the best examples of democracy in this election year. While some people thought it was funny to write in Harambe and Deez Nuts on their presidential ballot, an actual grassroots campaign by fans got Scott not only voted the captain of the Pacific Division team despite only having a few assists to his name, as well as a trade to the Habs before the break that ended with him going to the minors, but the guy scored two goals (three away from his NHL career total) and took home the MVP before hanging up his skates at the end of the year. Some hockey talking heads thought it was bad for the game, that it was a sideshow and even the league seemed really unhappy with Scott’s inclusion in the game. Yet at the end of the day, Scott made the game fun, memorable and also a lesson in democracy. The people voted for who they wanted, and they ended up getting their candidate.

Scott was fun, but then actual legends also had perfect endings to their storied careers.

Say what you want about the score, but there was something just right about Peyton Manning as the grizzled old gunslinger, the guy who’d seen much better days, riding out of Super Bowl 50 a champion. Everybody knew he was done, Von Miller and the Broncos’ defense made a joke out of Cam Newton and the Carolina Panthers, and Coldplay played the halftime show. All in all, it wasn’t exactly a game for the ages. Yet there was Manning, setting the table for the grand exit that Kobe Bryant would revisit a few months later in his own final game, torching the Utah Jazz for 60 points. You probably already know these things, and there’s a good chance that you won’t forget Peyton and Kobe’s last big wins.

It was also an Olympic year. Ryan Lochte, unfortunately, dominated the headlines toward the end of the Summer games in Rio, yet Simone Biles and the U.S. women’s gymnastic team, Michael Pheps, Katie Ledecky, Lilly King, Simone Manuel and nearly every other American Olympians who dove into a pool dominated the medal podium for America, while Usain Bolt had his own Peyton/Kobe Olympics, running past everybody one last time.

Andy Murray also won gold in Rio. He also claimed his second Wimbledon title and made it to the number one spot in the world. Novak Djokovic may have beaten him in four sets at the French Open, but Murray still ended the year on top. There’s a pretty good chance that twenty years from now we will look back on this past year as a time of change in tennis, with a bunch of young talent getting ready to break through.

All of that alone would put 2016 into contention as one of the great years in sports, but then you had the other big stories of the year. That’s what made the last 365 days so incredible, that the foundation for the year, the legends and their last games, the gold medals, hell let’s even throw in a banner year for UFC into that mix, all of that alone would be one hell of a year for sports fans. The UConn women’s basketball team – coached by Geno Auriemma, who is in a league of his own at this point with more championship rings than he has fingers – went undefeated and won their fourth NCAA title in a row. Just put that into the stew that was this annus horribilis, and it gets much tastier. Mix in the Villanova Wildcats beating the North Carolina Tar Heels in one of the most epic endings to a championship game ever, and you still haven’t scratched the surface of what made this year so special.

Even though all of that combined would make 2016 a sports year for the ages, it was Leicester City, the Cleveland Cavaliers and Chicago Cubs that put the seal on things. Any of those three victories alone with everything mentioned before would give this year an eternal shine. The fact that we had all three in the same six months – absolute Hollywood stories in every sense of the word – is almost too much to wrap your head around. 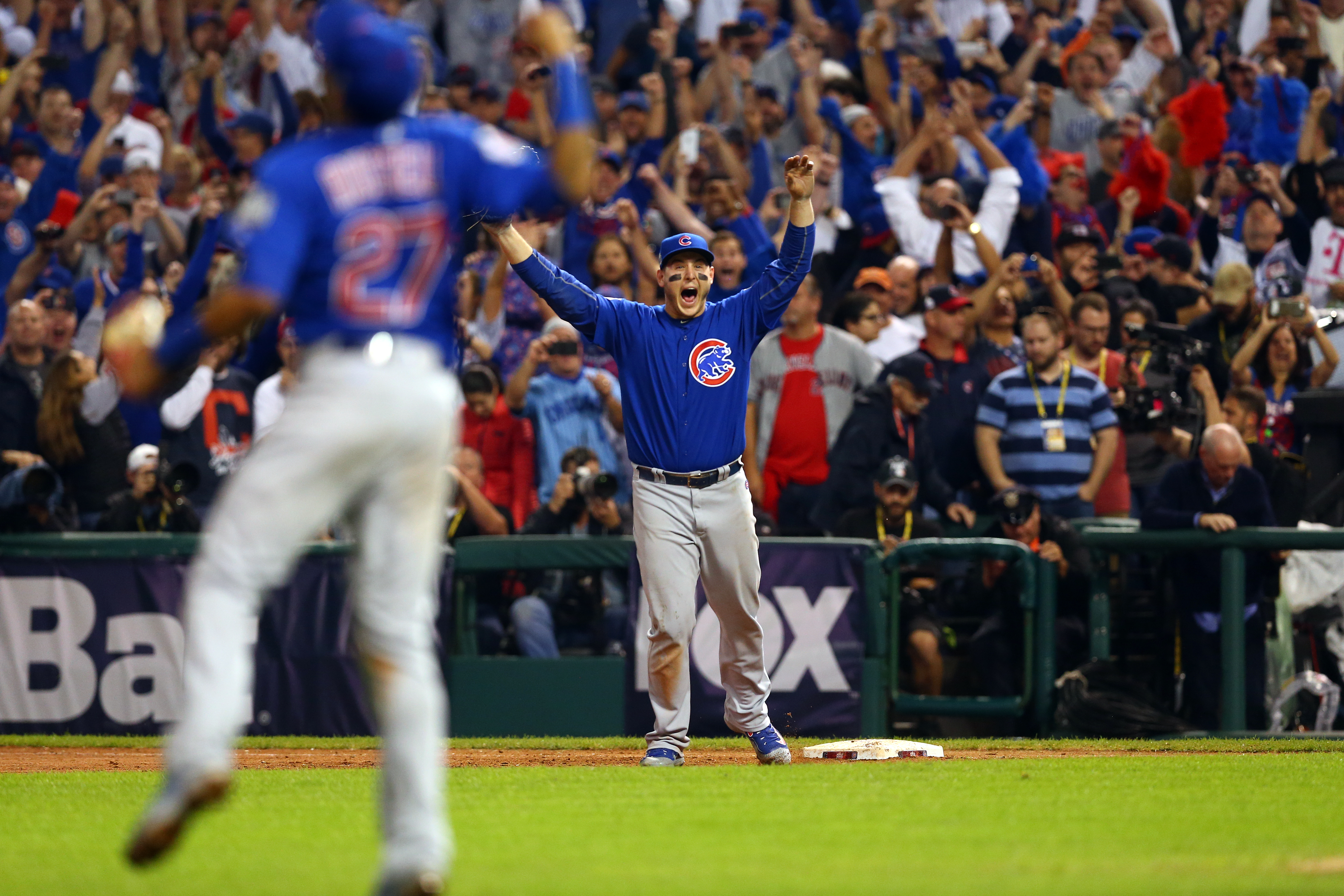 Leicester City, the Premiere League Cinderella story of the decade, quarter-century, whatever, came from the bottom of the pile in 2014, the club’s first year in Premiere League since 2004, and rose through the ranks at such blinding speed that nearly everybody but their supporters had to play catchup with what was happening. Leicester City? Where the hell is that, you heard newfangled American soccer fans asking at 7 o’clock in the morning in bars all across the country. It wasn’t one of the big names, and all this after a racist sex tape scandal saw Nigel Pearson relieved of his job a year earlier, it made the Foxes journey to the top one of the most memorable in recent memory.

And then you had the Cavs and Cubs. We haven’t even gotten to them. Maybe it’s for the best, because even as Cleveland is in the middle of defending their title and still figuring out ways to beat the Golden State Warriors, and pitchers and catchers are a little over a month away from reporting for duty in warmer states, what those two teams did is still sinking in. LeBron James, cementing his greatness once and for all, as if he really needed to do that anyway. The kid from Akron coming back home, redemption and all that stuff, leading his team from a 3-1 deficit against the terrifying Golden State Warriors, and that damn block, the one that basically yelled, “This is Cleveland winning its first pro sports title in over 50 years.” It was stunning. What more could you possibly ask out of sports? Seriously, is there anything else?

Oh yes, the Chicago Cubs. The end of the curse. The first World Series win since 1908. Seven games against the Cleveland Indians, the last one probably going down as one of the, if not the, greatest game in baseball championship history. The Cubs coming back from their own 3-1 deficit, this time to beat a team from Cleveland, a franchise also looking for their first title in a really long time. John Cusack nervously vaping away; Eddie Vedder amping up the crowd; Bill Murray crying and drinking champagne with the players. Ah yeah, and then the team: Kyle Schwarber shocking the world and coming back after a devastating early-season injury was supposed to have ended his entire 2016, Anthony Rizzo’s “glass case of emotion;” David Ross with his own perfect last game of his career, blasting that home run in the sixth that, eventually, really counted when everything was said and done; Kris Bryant going from rookie of the year to MVP; that entire pitching staff that has all-time greatest written all over it; Theo Epstein deserving an instant intro into Cooperstown and Joe Maddon. Good lord, Joe Maddon. The guy needed to guide one team to one season at the top of the baseball world and now he’s an immortal. They’re going to rename streets after him basically every person who took the field in Chicago, from players to trainers. The frickin’ Chicago Cubs won the frickin’ World Series. What? That was literally never supposed to happen until it did – in 2016.

Yeah, 2016 was dark. It was scary. It was one big Crying Jordan meme. It was downright rough. Yet we had all of these moments that even people that fans of sports got caught up in. We got A-Rod walking away from the game and we got 44-year-old Jaromír Jágr moving into second place on the NHL scoring list. Serena Williams won one Grand Slam this year. While that’s a huge accomplishment by any stretch of the imagination, you have to imagine that the greatest tennis player in the world is not happy with just one, and that we’re likely to see her use that as fuel in 2017. Kevin Durant went to play with the Warriors, leaving Russell Westbrook all to himself in Oklahoma City where he’s putting on one of the great basketball clinics in the history of the game. James and other NBA stars spoke out on big issues. The NFL was pretty rough to watch at the start of the season, but by the home stretch, those Packers, Steelers and, of course, the New England Patriots, all look strong as the season winds down.

Of course, football carries over and comes to a climax in 2017. That part of the season is another year. Another year for things to change – but also stay the same. Another 365 of who knows what. But if we’re lucky, we will at least have something close to a year in sports like we did in 2016 to help inspire – and distract – us for at least a little while.