In 2016, Ibtihaj Muhammad became the first Muslim woman athlete competing for America to wear hijab during the Rio Olympics. As one of the most-talked about Olympians in a group that included names like Michael Phelps and Simone Biles, she did her best to deflect the hyper focus on her religion or what she wears while still competing on a world-class level. Instead, Muhammad used her platform and voice to educate as she showed grace and humility on the biggest athletic stage in the world, making history along the way by becoming the first Muslim-American to stand on a podium at the Olympics, winning a bronze.

Although she’d take home a medal, her fortitude to remain true her to herself has led to a defining opportunity – to help normalize what being Muslim looks like. Less than a year after competing in Rio, some view Muhammad as a catalyst for Muslim women athletes, that the attention the media paid to her during the Olympics (not to mention a market estimated to be worth $5 trillion in under five years) is a big reason why Nike recently announced plans to debut a “Pro Hijab” for Muslim women who compete. Muhammad, who has her own modest fashion line, Louella, isn’t involved in the Nike campaign, but her impact is undeniable.

Muhammad began competing in fencing when she was 13 years old, when her parents found it to be a suitable sport because of the ability to wear the hijab during competition. She did not know other athletes who competed in the hijab, and for this reason, she understands the importance of having someone who represents you. “It’s always difficult when you don’t see someone excelling in something that you may have dreams or aspirations to participate in or excel at. It’s hard to see yourself in that space,” she says

Hajar Abulfazl, who captained the National Women’s Football team in Afghanistan, and who wears the hijab says Muhammad’s influence “made a worldwide impact competing and winning in Olympics for America,” adding, “She represents a strong and smart athlete who has commitment to her faith and culture. Her words and photos educate people around the world who believe the old stereotype about the hijab and that Muslim women are weak.”

The discussion around hijab in sport seems relatively new for most. But for Muslim women who choose to wear the traditional head covering, there have been several instances where it has been banned, forcing some athletes to choose to between honoring their faith and not playing their respective sport, or removing it in order to compete. 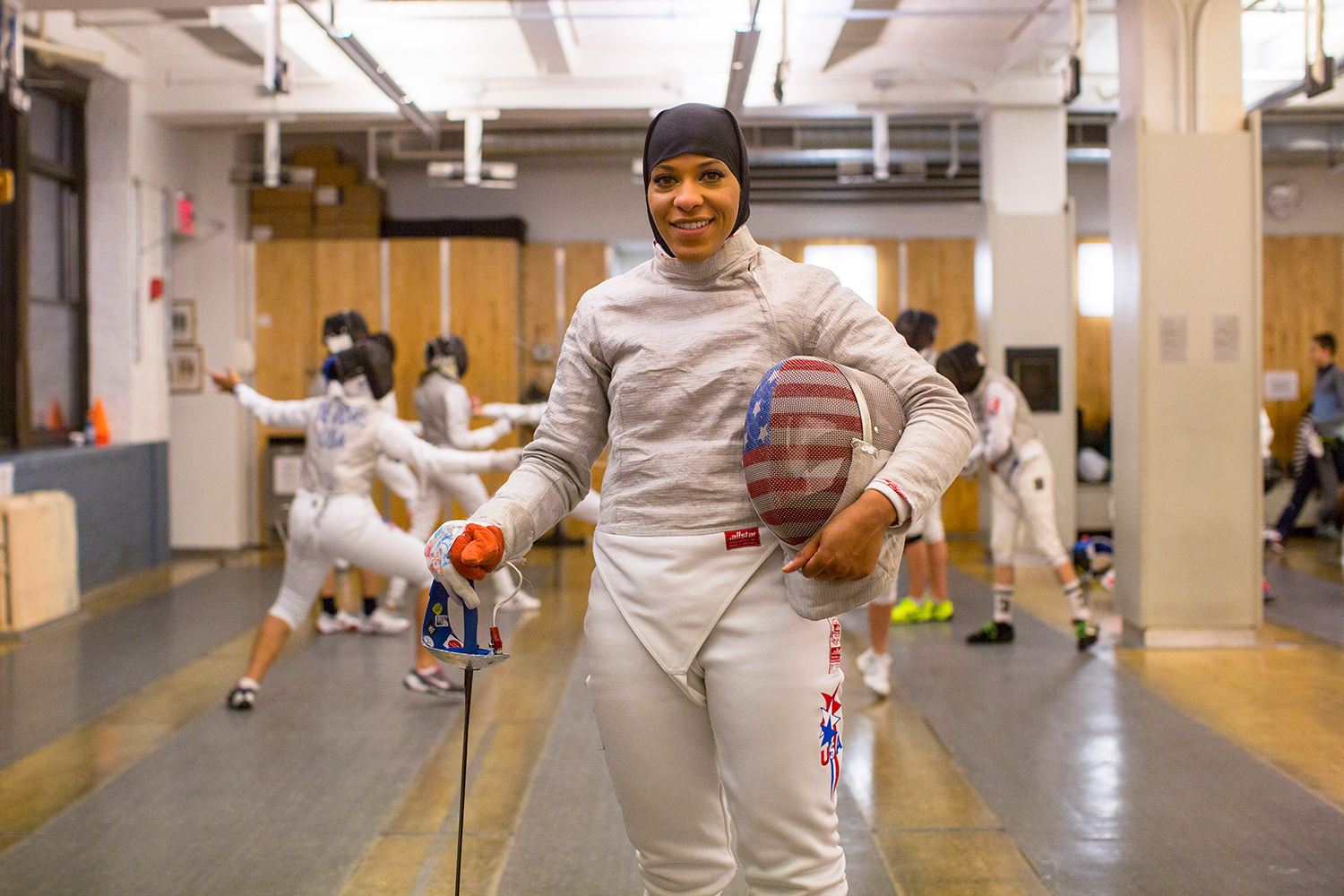 Basketball’s governing body, FIBA, states that “players shall not wear equipment (objects) that may cause injury to other players.” Currently, this prohibits hijab, and there is a petition fighting the ban. Last year, 16-year-old Amaiya Zafar was disqualified from the Sugar Bert Boxing National Championships when officials found her hijab to be in violation of their safety codes.

Kulsoom Abdullah, a Pakistani champion weight lifter, initially took up lifting to get strong, but there were other hurdles she would face when began to compete: The U.S. weightlifting organization would not accept the long-sleeve shirts, pants and hijab she wore in lieu of a singlet. When Abdullah issued a press release highlighting why she could not compete as a Muslim woman, the weightlifting federation allowed her to represent Pakistan in international competition in hijab.

The rules under different sports federations do not specifically ban hijab, but the general language in which headgear is banned inadvertently prohibits hijab during competition, and it can also affect Sikh and Jewish athletes who choose to observe their faith by covering their heads.

Of the different sport federations who ban hijab, Abdullah does believe it was initially based in prejudice, “I like to think that sports federations never considered women who might wear hijab and play the respective sport at the same time.”

Abdullah says that if sport federations realized how such general language could put hijab under the headgear ban, then sports federations could modify uniform rules. “This has been the case sometimes, luckily me for with weightlifting,” she says.

What she found specific to her case, however, were that the people in charge did not want to change rules that had been in place for decades.

“It was not until the Sydney Olympics in 2000, that women first participated in weightlifting,” she points out. “There was also concern that the sport was going to change and people would want to petition to wear all kinds of things, especially compression suits that could give an advantage, such as in powerlifting.”

It did not mean prejudice and misunderstanding of what hijab represents does not exist. “In general, whether sports, work, or other institutions, if hijab is specifically stated to not be allowed,” Abdullah says, “It seems it is from fear or dislike of what they think that it represents (such as all of the negative stereotypes) or that it is going to take over the world, so to speak.”

For Abulfazl, who wears hijab during her football matches, the misconceptions are rooted in lack of education and knowledge in what being a Muslim woman is. “People are not afraid of hijab, only confused by it because they don’t understand Islam represents a peaceful religion and that wearing hijab is not always mandatory. Many women choose to wear the hijab and get empowerment from it.”

As for the belief that hijab can impede performance on the field or cause injury, Abufazl believes otherwise. “The hijab does not cause any problem or difficulties in competition,” she explains. “There are special designs, including FIFA-approved, that we wear in football and that is available in other sports. I have never experienced [injury] or know of anyone with injury from hijab.”

Abufazl says she hopes that by wearing hijab she can inspire other young Muslim women. “As a role model of female sports empowerment, I wear it to show the next generation and their parents how Afghan women and girls can maintain respect for religion and culture while pursuing sports achievements and the benefits to developing independence and equality in society.”

This is why athletes lending face to the issue, as Muhammad has done, has proven to be so important, particularly when the Muslim community continues to face extreme scrutiny. 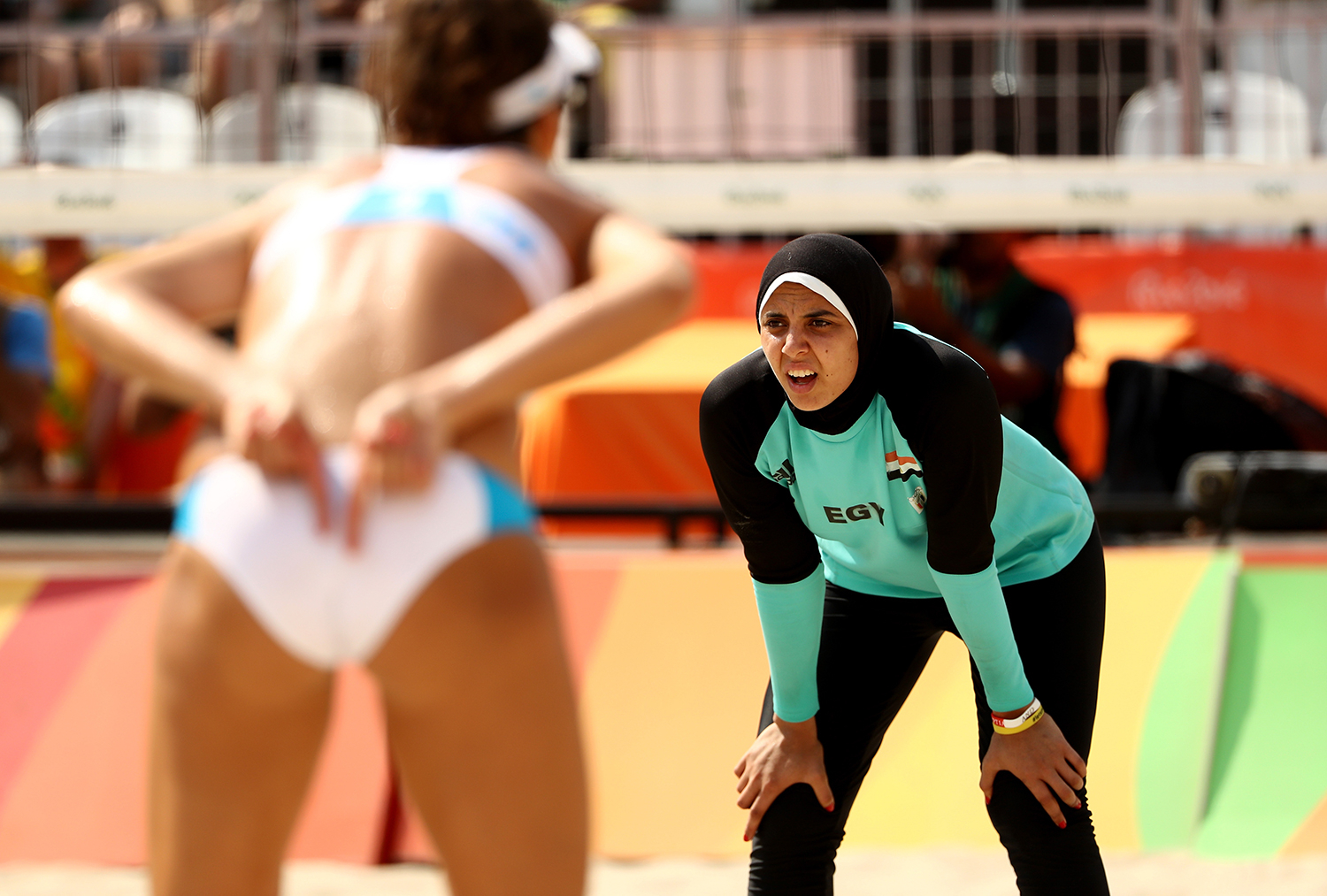 “I think hijab in sport has always been part of the conversation; it just seems that the larger community is all of a sudden coming to the table,” Abufazl says. “From the outside, people are saying, ‘Nike is so unique for coming to the forefront and including the hijab in their conversation.’ But there’s tons of companies that have come up with a sport hijab, it’s just that they don’t have the same reach that Nike has. If you ask people within the Muslim community, we all know that there’s been access to sport hijabs from smaller boutique companies.”

Shireen Ahmed, an activist and sports journalist who focuses on Muslim women in sport, wishes the hijab did not have to be the focus when discussing athletes like Ibtihaj Muhammad. As she previously wrote: “The headlines that scream about the accomplishment of a ‘Hijabi American’ are unhelpful as they reduce an athlete to her outfit. It can be noted that we don’t refer to any other athlete who observes a faith by a religious accessory, be it a necklace or tattoo featuring a cross, the Star of David, or a ‘Karma’ symbol.”

However, Ahmed also recognizes the impact Muhammad has had and that her participation has normalized and, for many, introduced covered Muslim women into mainstream sports. “The optics of a veiled Muslim woman in places where it has yet to be seen is not always understood or welcome,” she says. “But she has been incredibly sincere in explaining about her journey: She did not have to fight against a ban in her sport.”

Muhammad is aware of this.

“Having a Muslim woman, especially from the United States, who’s played on Team USA, who’s medaled at the Olympics, it shows people in and outside of the Muslim communities that it can be done,” Muhammad says. “While I wish there had been another Muslim woman before who had done all things that I’ve been able to accomplish, I still feel very grateful. I hope there are tons and tons of Muslim women who come after me, and hopefully their journey will be easier because I’ve laid this groundwork in showing that it’s possible.”