NBA teams don’t lose their marquee players every day, especially when they drafted them. The league’s current collective bargaining agreement allows for a team to sign a player they drafted to a five-year contract after his fourth year in the league, meaning teams can generally secure the services of their best young players for nine years. And yet, there goes Kevin Love, leaving Minnesota after just six.

When something like this happens, there are dozens of different threads to pull on – from what the Timberwolves got back to what Love will do in Cleveland to what kept the Wolves out of the playoffs during Love’s tenure as the face of the franchise – but here’s one that remains relatively un-tugged: I’m glad that Minnesota didn’t lock up Love for the five-year max when they had the chance.

I confess that I don’t exactly know how I got to this point. When former president of basketball operations David Kahn offered Kevin Love a three-year contract with a fourth-year player option instead of the five-year max he so clearly coveted (an offer he reportedly balled up and nearly threw away), I thought it was a colossal fuck-up. It was shortsighted and privileged the potential of Ricky Rubio (one of “Kahn’s guys”) over the proven worth of Love (one of “McHale’s guys”). In essence, it was an open rebellion against rationality, choosing one asinine and emotional reasoning (who drafted whom) over another, more volatile one (Love’s pride and concomitant trust in the organization).

Although part of the blame for the Wolves’ underperformance since “The Kahntract” can be laid at the feet of Kahn’s roster construction, there’s a lot that can’t: Rubio’s ACL injury, Kevin Love’s hand injury, the way now-retired coach Rick Adelman’s determination to get Minnesota into the playoffs turned into a kind of senioritis once things went south this past season. You can argue that the pressure applied to win now by Love’s deal influenced subsequent decisions in a negative way, or that the negative emotional weight generated by it was impossible for Love or the team as a whole to get out from under.

But the surprising bottom line for me is that when a smart basketball mind that I respect waxed about how easily the Timberwolves could have had Love under contract through 2018, my immediate reaction was, “Eh.”

Some of this is because of Love’s game – not overall, but in a moment-to-moment way. When he first came to the Wolves in a draft night trade with the Memphis Grizzlies for O.J. Mayo in 2008, I was distinctly not on board. All I knew about him was that he was a doughy white dude with an *NSYNC beard whose signature skill was the unglamorous task of rebounding, and maybe throwing some decent outlets. Compare that to the highly touted Mayo, who was supposed to be a talented scorer at a position where the Wolves had almost never had elite scoring.

I was clearly wrong about how good Love would be. But the way in which he is good continues to perplex, and not just on some he-can’t-lead-his-team-to-the-playoffs bullshit. Thinking back over Love’s time in Minnesota, the positive iconic image I come away with is this one: 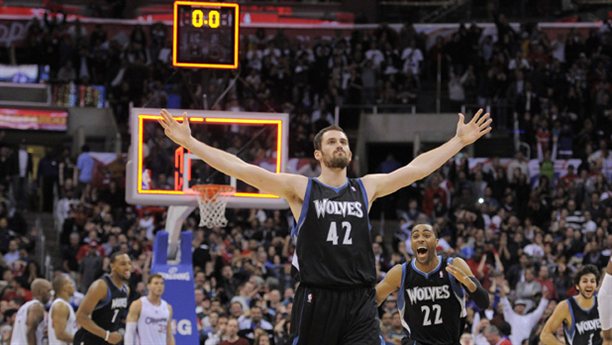 Arms aloft after a last-second shot downed the Clippers back on January 20, 2012, Love has an expectant, “Are you not entertained?” kind of look on his face as the Wolves go nuts around him and the stunned Clippers crowd reacts with glum silence.

Many athletes, from Jordan to Kobe and beyond, are motivated by a recursive desire to prove people wrong, but for Love that desire is tinged with a certain entitlement, manifested in his carping about fouls or not getting back on defense. (It looks like he won’t be leaving that need to prove doubters wrong in Minnesota, as he’s elected to wear  #0 for the Cavs due to 42 being retired for Nate Thurmond. The zero jersey has a long history of being taken up by chip-on-their-shoulder players like Russell Westbrook and Gilbert Arenas.) I wouldn’t go so far as to call this a character flaw – it’s the kind of edge on a person’s personality that we might never see were he not subject to the withering glare of the spotlight night in and night out.

It’s just part of the fact that the optics for Love have never been great. This was the best image the team could cull from what will probably stand as his single greatest game in a Wolves uniform, the night he had 31 points and 31 boards against the New York Knicks – the first 30 and 30 game since Moses Malone did it in 1982. 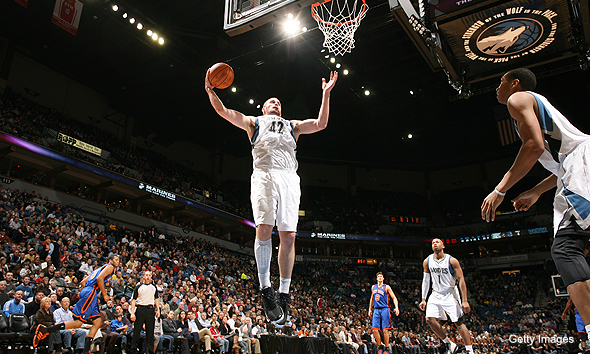 This was the image they turned into a commemorative T-shirt. It’s not exactly Air Jordan. He doesn’t throw the hammer down over block attempts, doesn’t break defenders’ ankles. Even Al Jefferson’s ground-bound post game has a certain throwback elegance in the footwork that you can learn to appreciate once you know how to look for it. But Love’s rebounding ability is hard to see, beyond the oddly facile way he has with taking down one-armed boards. It’s effective, like his 3-pointers are effective. Even his most highlight-worthy plays – the ICBM-esque outlet passes he perfected with Corey Brewer this past season – make him look kind of derpy.

He hasn’t made the unglamorous glamorous the way the Spurs (kind of) did this season in winning a championship. He’s just done so very much of it for a team that hasn’t really mattered. His body of work in Minnesota is impressive in the same way the world’s largest video game collection is impressive: each one of those things might be fun at the time, but the overwhelming totality of it builds toward nothing more than overwhelming totality.

It goes back to Love being miscast as a franchise player for the Wolves when he can neither generate his own offense nor effectively shut down the opposition’s. It absolutely doesn’t mean that he’s not one of the top ten or even top five best players in the NBA – that’s just part of the contradiction. The Wolves failed spectacularly to build a playoff team around Love, but Love is also hard to build around.

Your handyman might be able to fix anything and everything under the sun, but that doesn’t mean you want him designing your house. Love’s game is a handyman: it fills the cracks, delivers points, rebounds and assists as needed, plus his liability on defense has been overstated; Minnesota’s defensive rating (points allowed per 100 possessions) last season was virtually the same whether he was on the floor (106.6) or off (106.0). But its prime quality is staggering, almost inexorable volume, not transcendent beauty.

This, ultimately, is how one of Kahn’s very worst mistakes – and there’s a lot of competition for that honor – might be just the out that the Timberwolves and Love both needed. With LeBron James and Kyrie Irving in Cleveland, I expect Love to solidify his reputation as the league’s preeminent power forward and one of the best players in the game right now. He won’t have to carry the franchise, but will now exist in a web of interdependent pieces with LeBron and Irving. Some nights, he will go off for 20 and 20. Others, he’ll just have a ton of rebounds or a highlight outlet pass to LeBron. At this point, being concerned about whether Love is a player who can do it on his own is akin to wondering if your red crayon can carry a whole drawing. You’ve got a box of eight colors: use them.

Relationships end. They have a shelf life and the only thing more painful than a bad ending to one is when it struggles on past the sell-by date, one or both parties going through the motions, just marking time with no idea how to extricate themselves from a situation that no longer makes sense. But in the wake of their dissolution, it’s natural to want to revisit the good times.

Love’s 31 and 31 game from 2010 starts painfully, partly because Love himself goes 0-3 in the first quarter with two rebounds, a line he would often put up in the first minute by 2013-14. But it’s equally painful to see Sebastian Telfair, Wesley Johnson, Michael Beasley and Darko Milicic pretend to be legitimate NBA starters. There are turnovers, miscommunications, one-on-three drives to the hoop while shooters lurk on the perimeter. The Knicks’ Landry Fields looks like a world-beater matched up against Johnson, who looks lost.

Then Love’s rebounding kicks in during the second, and you can almost feel some kind of power meter filling up, Street Fighter-style, even though the shots still aren’t falling. “There a reason he’s open,” says Walt Frazier on the Knicks’ broadcast. “He can’t finish.”

But he keeps working and working on the boards and somehow he gradually turns into a freight train: not smooth, not sexy, not agile, just determined and powerful. He doesn’t even make a 3-pointer until the fourth quarter and he only takes four all game. The Wolves were down 87-80 at the end of the third, then ripped off a 32-16 fourth to win 112-103. Love scored 14 in the final frame and closed the game out like a franchise player, like a superstar.

Being at that game that night felt strange and wonderful and dizzying, the crowd brimming with wonder at Love’s emergence in a game for the record books. But it’s hard not to look for signs of the trouble to come, to try to tell if what we all saw felt seismic when it was just something big passing by. With his trade to Cleveland completed, Wolves fans are left to ask, like the listener in Lawrence Raab’s “My Soul Is a Light Housekeeper,” “How can you change / so completely? You’re not the [player] / I thought I knew.” And Love could respond in kind:

but understand, dear, it wasn’t such a great change.

Imagine you could have seen that side of me

at the beginning, when we walked

for hours along the shore, and you were so certain

I was yours just because you loved me.