Gus Kenworthy on Coming Out, Cleaning Up at X Games - Rolling Stone
×
×

Gus Kenworthy is considered to be one of the greatest freestyle skiers in the world, but after he came out in an ESPN interview last year, he’s achieved a level of celebrity that goes well beyond his ability to make it down a mountain.

And as such, all eyes were on Kenworthy at the X Games, a competition in which he’s never medaled – until last night, when he managed to have one of the best runs in the SuperPipe competition and took home a silver medal for his efforts. Even better was the fact that his boyfriend, actor Matthew Wilkas, is there to witness it. Shortly after his triumph, Kenworthy spoke with Rolling Stone from Aspen, and shared photos that revealed a private glimpse of how he was nursing his heel injury as he prepares for his next two events during the X Games this weekend.

Congrats on winning silver last night. You’ve said SuperPipe isn’t your favorite event, but you were amazing.
Thanks. Yeah, it’s not the discipline I grew up skiing. I didn’t even ski halfpipe until I was 14 because the resort where I lived didn’t have one. So it wasn’t always my favorite event, but I grew into it. I love it now, and last night was amazing. It was a special night for me: It was my first event after coming back from the worst injury I ever had. And it’s the first event since coming out of the closet and first event of X Games this year. It felt really amazing. I was really, really happy with the round, and I thought, “Wow I couldn’t have done it better!” Honestly I think that was my best run. I was really happy about that. And to get my first X Games medal in Aspen was amazing.

I remember one of the things you said in your ESPN interview last year was that you didn’t have a “TV boyfriend,” and now you have Matt there with you. Tell me what it was like taking pics with him after the run.
Yeah, the TV boyfriend thing sounds weird, I know. But everyone I looked up to growing up, they would show their girlfriend on TV – you know, Simon Dumont’s girlfriend, or Tanner Hall’s girlfriend, or whatever. I was just kind of bummed that it was something that I’d never have. I felt like I was never going to be confident and authentic and introduce someone as my boyfriend to the reporters and have him on TV. It was really special to want to do that and be happy about it. It was amazing. I looked up at the screen and saw Matt at the bottom. And it was touching being there with my mom, my boyfriend and my agent – my little support team.

This is your first X Games since coming out and you said you were worried it might be strange. Has it been?
Honestly it’s not like a strange thing or a big change. I’m just way more confident in my skiing and everything. I don’t think there’s a direct correlation between my sexuality and my skiing ability. But I think because I was so concerned about it being found out, it was a distraction. It was pulling me away from the competition and made me lose focus. Now, having it off my chest, I can just worry about skiing and not any of the other stuff. 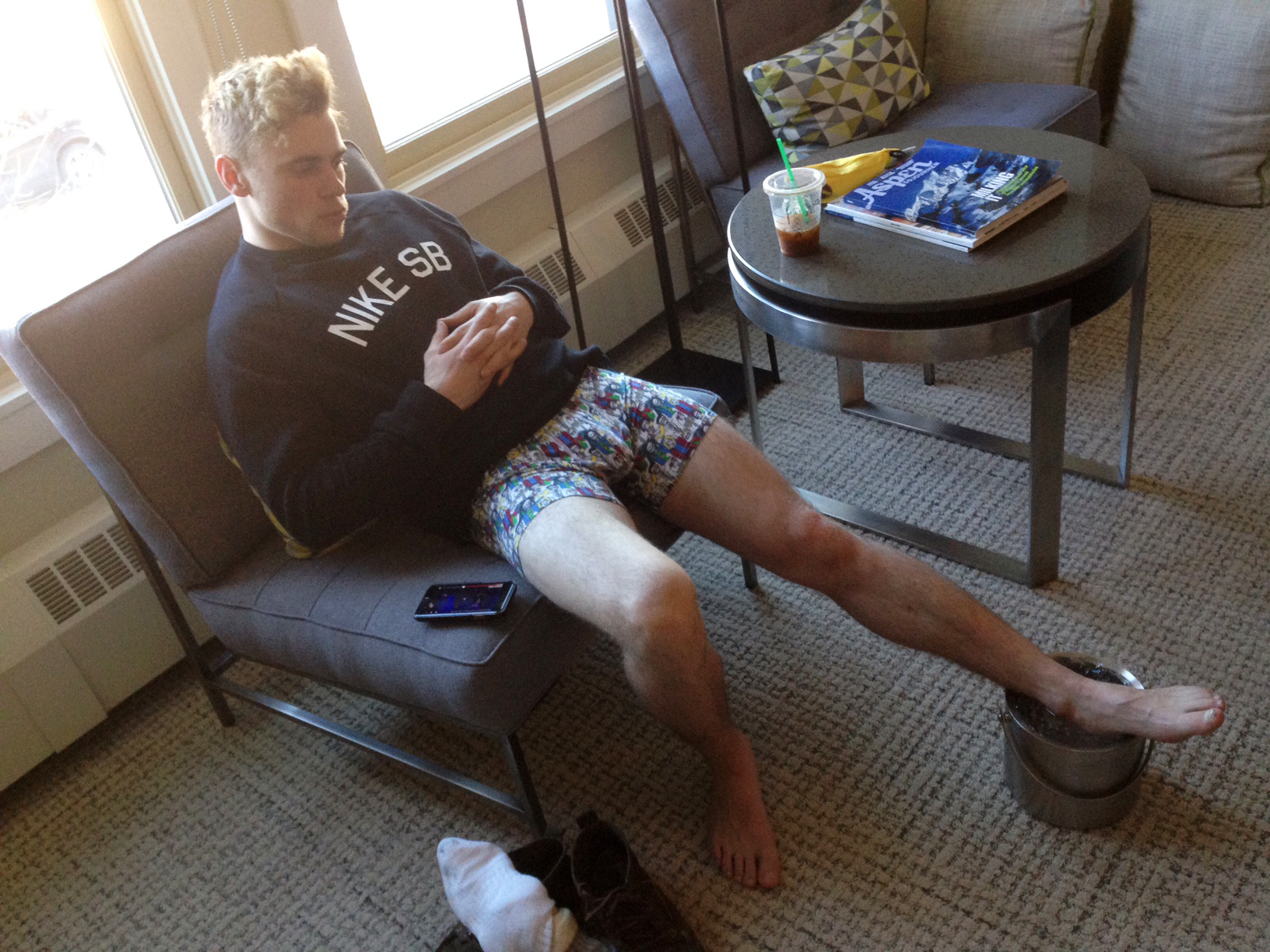 I see in this photo you’re icing your bruised heel in your hotel room – is that what it’s like when you’re done with a run?
That is pretty much what I did all morning before the pipe event – switch off, 10 minutes on and 10 minutes off. You can’t really see the discoloration, but my heel’s all bruised. It’s sore and it hurts to even walk and put weight on it. I was worried about putting it in the boot and going to the halfpipe. I took a bunch of painkillers and then the adrenaline kicked in it just kind of took over.

I noticed that your phone is next to you in the picture. Are you playing games while you’re icing?
It’s open to YouTube. BBC does these Radio 1 Live Lounges, when they bring in artists and do covers. I was listening to Miley Cyrus doing Lana Del Rey’s “Summertime Sadness”. I don’t listen to music when I ski – I find it distracting – but I will sing to myself before I go to just get my mind out of what I’m doing and relax a little bit. So that was the song that I sang to myself last night, “Summertime Sadness.”

I know you’re friends with Miley and didn’t you guys date at one point?
No, we’re just friends [laughs]. I was actually going to see her when I was in L.A., but it didn’t work out, but usually if I’m there I’ll see her. She came to Denver to do her concert and I saw the show and we hung out. We’re not super close, but she’s a really cool girl. 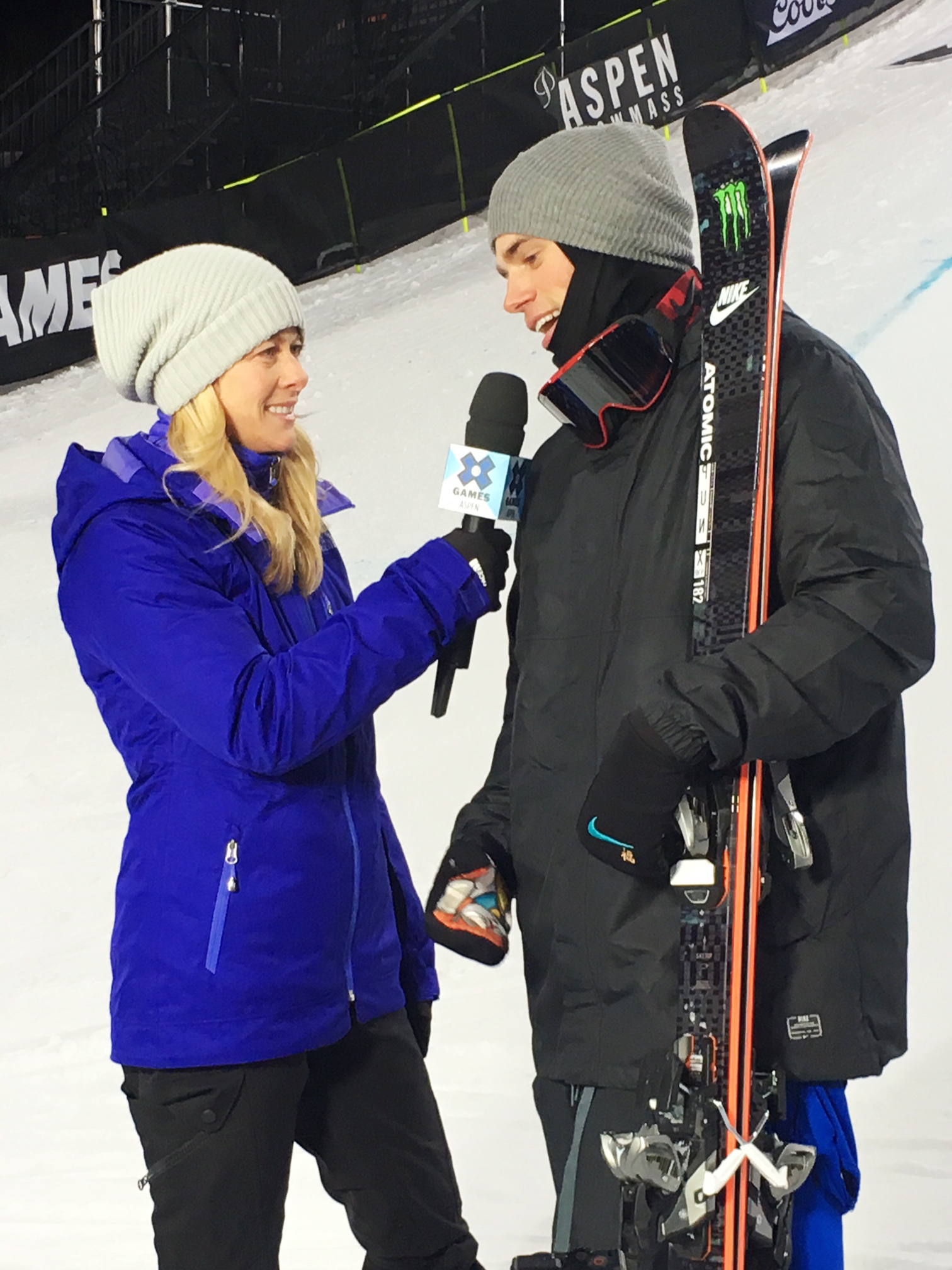 What does it feel like when you’re getting ready for the run? The adrenaline is pumping – do you feel like Superman?
No, it’s not like Superman. It’s just Advil and adrenaline and it’s not like I don’t feel it. I totally do. I was walking on the toes of my boots. But as soon as I clicked in, I was at the top of the pipe, and they said, “OK, you’re ready to go,’ and I was so amped up I wasn’t even thinking about it. It’s not that I don’t feel it; it’s just pushed out of my mind. It was throbbing, but I knew I just needed another foot of air.

I saw you with Anderson Cooper and Kathy Griffin for the CNN New Year’s Eve show. You and Anderson have become sort of buddies now haven’t you?
Yeah, he’s a total sweetheart. He’s sort of turned into a father figure to me. He reached out and offered advice after I came out. Basically, he said, “If you need anything, just ask. I understand what it’s like to be out in the public eye.” He said, “You’re a great kid.” So he’s been really supportive. They arranged for me to be on the show for New Year’s Eve and it was one of the most surreal experiences: to be a skier from a small town and co-hosting a ball drop in Times Square was insane. It was out of the realm of anything I thought was possible. We got to overlook a sea of people. It was completely insane.

So if you’re going to vote there, I’m curious, what do you think of Donald Trump?
I’m worried for our country if he becomes president, to be completely honest. Things that he says have made me fearful. And I think it’s crazy that he’s even potentially a candidate. 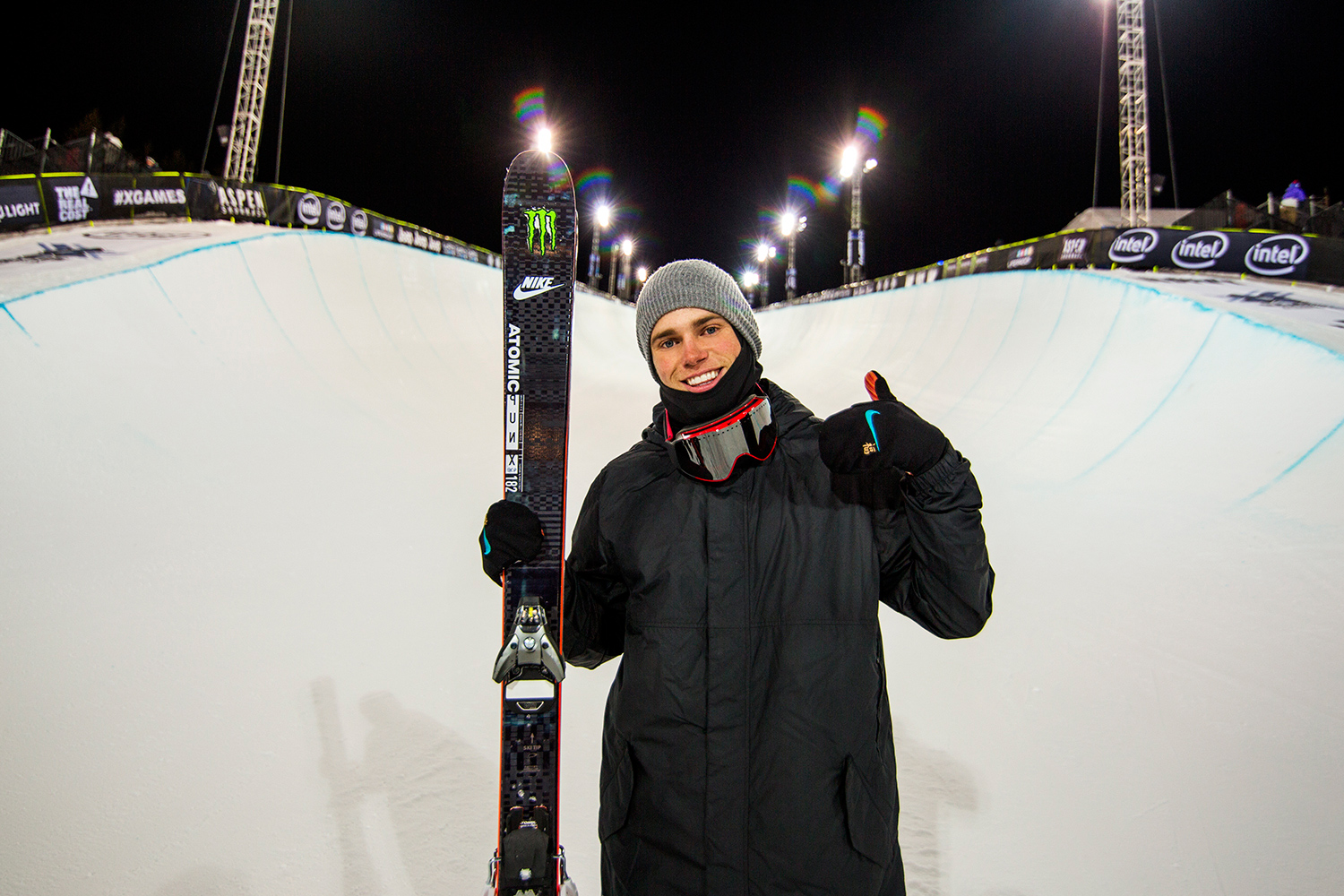 I noticed that when you finished your run, they put a microphone in your face almost immediately. Do you think they’re expecting you to say something to all the gay kids out there?
I don’t really know if anyone is expecting me to do anything. I think I’ve put myself in that position and I don’t mind doing that. I’ve gotten a lot of messages from kids struggling with their identity and sexuality, whether it’s because they’re in a religious family or a small town or a sport that’s not very accepting. I’ve had a ton of outreach, and I’ve tried to get back to kids as best I could. I totally don’t mind being that person who takes over that position. I struggled for a long time and if I had someone to look up to who had broken through, it would have been great.

One of your friends commented that, in the past, you’d be so nervous getting onto the chairlift at X Games that you’d throw up. Has that sort of anxiety calmed down now?
It really has, it’s crazy. I didn’t get nervous at all before the Grand Prix. But I did get nervous before this X Games because I always do, but it’s so much more controllable. I’d been violently nervous before. I’d always wanted to medal here. I always felt like I had this side of me I was trying to make up for in a way. I was the most relaxed I’d ever been at X Games.