If there’s one thing Colin Kaepernick has shown us this week, it’s that when a black athlete steps out of line in the eyes of white America, it is clear who is going to overreact, and who’s going to understand.

To those outside the black community, people who are largely unaware of the nuances of black life in America, professional athletes speaking out on social issues appears to be breaking news. To black people, however, they have seen this hustle. They know it when they see it. They have seen the likes of Jack Johnson (beats white men in the ring, dates white women), Muhammad Ali (his Muslim faith), Allen Iverson (tattoos and cornrows), Cam Newton (touchdown celebrations, being black in a space usually reserved for white men), Serena Williams (her body and hair) and now San Francisco 49ers quarterback Colin Kaepernick all written and talked about by white sportswriters who take a paternal tone and an air of understanding what goes on in their lives and communities. Yet those who pride themselves on scooping their colleagues on the next big story or writing the hottest of takes can’t figure out what ails many of the people they cover.

What Colin Kaepernick's National Anthem Protest Tells Us About America

This is a tale of two views, and it is black and white.

Many of those views assume that Kaepernick, who decided not the stand for the national anthem before a game last week, can’t be oppressed because he’s rich and that he was adopted by white parents, and wonder why he hasn’t focused on “black-on-black” violence and issues. Curt Schilling, the Alt-Right’s next great white hope after Donald Trump, chimed in with his thoughts, Trump himself said the quarterback should consider looking for another country “that works better for him.” Telling black people and other minorities to go to find another country to live in is one of the oldest racist tropes out there, but this is Trump we’re talking about, of course. Yet it goes beyond politicians. Hub Arkush, executive editor of Pro Football Weekly, tweeted that Kaepernick should be grateful for making the money his does. A big change from last season, Arkush thought that the Chicago Bears should trade for the quarterback. Clay Travis of Fox Sports called Kaepernick “a fucking idiot” and wondered “what does the United States do to oppress black people?” and peppered it all with a handful of backhanded compliments.

No one is calling the writers racist. However, the tone that some sportswriters use in these instances is racially insensitive at best, and it’s something black people are all too familiar with. We openly talk about these topics in church, at the barbershop and in Facebook groups. We see it in the critiques of President Obama, with All/Police/Blue Lives Matter, and in every comment section of an article on Chicago’s heartbreaking violence. We often take on that weight. It is an added layer to what goes with black life in America.

The idea that racism doesn’t affect athletes is a myth, an urban legend propped up by the system that perpetuates many of the problems black people in America face to this day. It’s the people that don’t face these problems that don’t understand that. Just earlier this year, Seattle Seahawks safety Kam Chancellor was looking to buy a gym and the employees called the police on him. This happened after he signed a contract extension worth $28 million last season. Before that, it was the racial slurs hurled at Richard Sherman over social media for his rant after the NFC Championship game a few years back. Remember when Atlanta Hawks guard Thabo Sefolosha got his leg broken by NYPD officers? He’s a one percenter as well, but he’s not immune.

“When I go home, I get pulled over just because,” Tennessee Titans linebacker David Bass said about going back to his hometown of St. Louis, “and they’ll say, ‘We’re doing random checks,’ which is against the law. Or they say, there was a theft and the getaway car was like my black Durango. When they don’t know who you are, all you are is black. They don’t know that I graduated from college, or that I’m in the NFL. But when they find that out, they want to stop and have a conversation.”

Since Kaepernick’s public stance, he’s turned into Public Enemy Number One, but he’s also exposing this vicious cycle. His stance has made more people stand up and ask, exactly, why he’s having his feet held to the fire for exercising his American right to protest and free speech. Black athletes and black sports analyst are often told to “stick to sports” when they venture out of the comfort zone of white male Americana. Bradley Zimanek, a Montgomery Advertiser columnist once suggested that ESPN football analyst Andre Ware favored Blake Sims as the Alabama quarterback over Jake Coker, who’s white, because both are black. 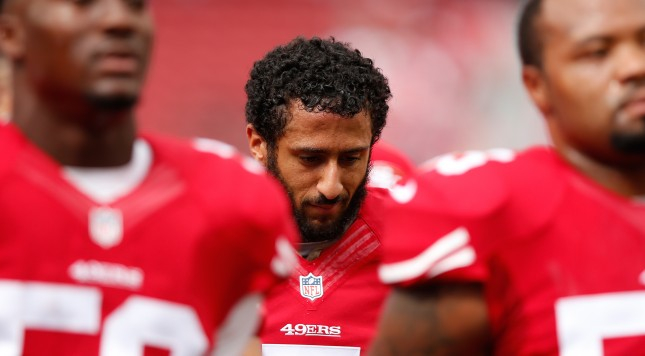 “This is not something that I am going to run by anybody,” Kaepernick told NFL Network. “I am not looking for approval. I have to stand up for people that are oppressed. … If they take football away, my endorsements from me, I know that I stood up for what is right.”

This is what black athletes have to deal with and always have dealt with.

Since Kaepernick didn’t stand for the national anthem, everyone has offered an opinion on him. John Isner, the highest-ranking American player in men’s tennis, “I thought it was pathetic from him,” Isner told reporters. “The cause he was going for, fine by me. He could have found some other ways to present his voice there. A lot of NBA players have done it, and good on ’em.” It was one of the most willfully ignorant reactions to Kaepernick outside of Rodney Harrison who said of Kaepernick, “He’s not black.”

On the other side, there’s NFL Hall of Famer Jim Brown, a legend in the realm of activist athletes and arguably the greatest football player ever. He was happy to see players like Kaepernick speak out on society’s ills, saying, “And for a couple of generations it was about making money, not messing with your image. And the agents became the pivotal figure for a lot of these guys,” Brown told NFL Total Access. “And the agents kept reminding them that you have to be this all-American boy to make these kind of dollars and these dollars are astronomical dollars. So the money came into the culture and created a couple of generations of individuals who did not want to speak up.”

Kareem Abdul-Jabbar also weighed in, writing for the Washington Post: “What should horrify Americans is not Kaepernick’s choice to remain seated during the national anthem, but that nearly 50 years after Ali was banned from boxing for his stance and Tommie Smith and John Carlos’ raised fists caused public ostracization and numerous death threats, we still need to call attention to the same racial inequities.” He went on to write: “Failure to fix this problem is what’s really un-American here.”

And then there’s the #VeteransForKaepernick hashtag that’s been trending on Twitter over the last 24 hours. Black veterans who fought for this country voicing their support for a man’s right to do something they’re put in harm’s way to protect: speak up. The very people politicians are trying to say Kaepernick is disrespecting with his protest are the offering up some of the clearest and smartest takes on the matter. Not sportswriters or pundits. It was interesting to see that the people they were trying to prop up as “Negro Firewall,” joined Kaepernick in calling them out.

Racism is much more complex than we like to imagine. It’s more than a word; it’s a system that is backed up money, politics and the criminal justice system. We live in a country where when media pundits called U.S. swimmer Ryan Lochte, a 32-year-old man, a “kid,” for lying about his brotastic experience at the Rio Olympics, but a Cleveland police officer can kill Tamir Rice for doing just that – being a kid. A country where Kaepernick is deemed as being unpatriotic, for exercising his constitutional right to freedom of speech, but Dylann Roof can burn the American flag and walk into an A.M.E. church and murder people. A country where a presidential candidate whose slogan is “Make America Great Again,” wants to criticize a black man who just wants justice is the epitome of not just hypocrisy, but it’s also downright fucking absurd. Black lives seem to matter on game day when America needs to be entertained. The rest of the week, not so much.

Kaepernick used his platform, for all intents and purposes, to call America on its shit. There’s nothing wrong with loving our country, while having an honest conversation on how we can make things better. No laws were broken and nobody was hurt. He was just exercising his right to get some peace of mind.

San Francisco 49ers quarterback Colin Kaepernick says he will continue to sit during the National Anthem as protest. Watch here.