It’s Game 2 of the Washington Wizards/Chicago Bulls playoff series. Late in the first half, Bradley Beal dribbles off a pick. He’s spent a laborious season learning the ins and outs of pick-and roll-playmaking – throwing up a litany of clanked midrange jumpers and messy turnovers along the way – but is finally starting to see his toils bear fruit.

Despite Joakim Noah and D.J. Augustin’s outstretched arms, he sneaks a pass to Marcin Gortat, who finishes the jumper.

“It was a huge moment,” says Beal of the 26-point performance that gave his team a dominant 2-0 lead in a series they’d win in five games. “In my second year in the NBA, being able to stay poised, calm and collected and just [doing] what I know I’m capable of doing – it was what I expected. At the same time, it was a great feeling and a great experience because I’m only 21 years old and I was able to perform at such a high level.”

After making the playoffs for the first time since 2008, the Wizards locked-in on last year’s success, signing Gortat to a hefty 5-year, $60 million extension and letting defensive swingman Trevor Ariza walk, replacing him with a cheaper – albeit older – Paul Pierce. With an unexpected trifecta of potential, flexibility and success, Washington is now an attractive potential destination for stars – including hometown hero Kevin Durant, a free agent in 2016. Until then, they’re betting on continuity, as well as the potential of Beal and first-time All Star John Wall, to not only keep them in the conversation, but vault them into contention.

Already though, things have started to ricochet off the steep incline of a honeymoon season. Nene and new addition DeJuan Blair were suspended for the first game of the regular season. Kris Humphries, a new addition to bolster frontcourt depth, will miss at least two weeks after injuring his finger. And soon after this interview, Beal fractured his wrist, which will keep him out of action for 6-8 weeks. 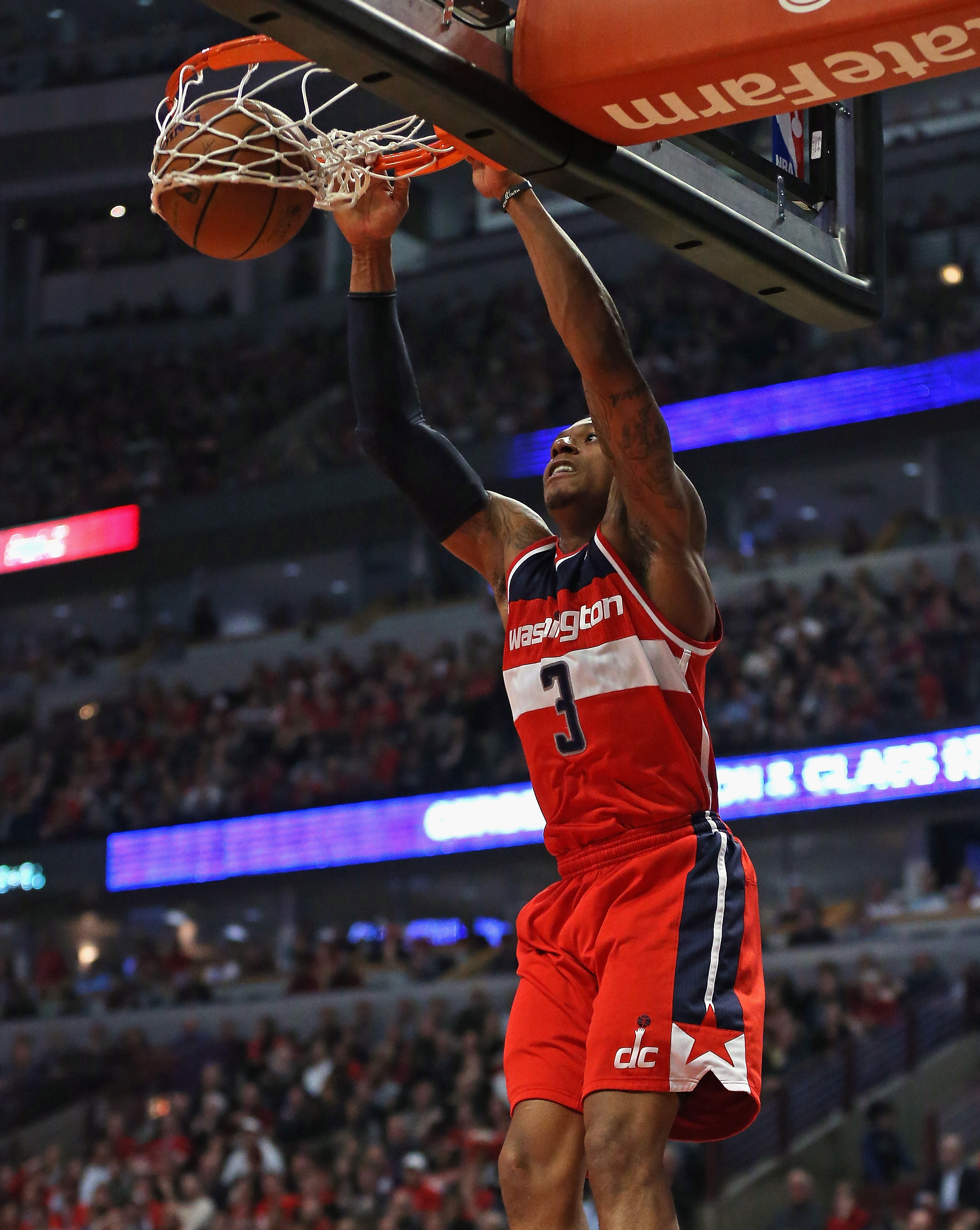 Hiccups like this are important tests for up-and-coming teams, though. When a squad doesn’t have to wallow in its ineptitude or fantasize about finding a potential savior in the draft, the topical details begin to take precedence. Learning to stay poised in the face of frustration becomes the name of the game.

Washington might have to lean a little too much on their unproven young crop until Beal’s return – Summer League standout Glen Rice Jr. for example, or the still-finding-his-way Otto Porter – but if the Wizards can’t stay afloat through a few bumps and bruises, they don’t belong in the company they’re aiming for.

Beal plans on wading through the missteps by inheriting some of Pierce’s famed aplomb. “[His aura] trickles down on everybody. When one guy’s like that, the whole team takes on that role. That’s the type of team we want to be: confident in everything we do and have that swagger about ourselves.

“[Pierce’s] confidence and his killer instinct is something that I need to implement into my game,” he continues. “I’ll probably be a lot more aggressive on both ends of the floor and accept each challenge that’s given to me. A guy like Paul, he can definitely push me over that hump.”

Steady progress requires maintaining a tricky internal balance between the opposing forces of confidence and humility, something Beal is still in the process of figuring out.

“I have to be not necessarily cocky, just confident,” he says. “Everything you gain in life, I believe, should be earned. And I believe I’ve earned it. At the same time, I’m humble about it because I still want to continue to be the best that I can be.”

Eventually, the poise comes naturally. It’s OK to have a mean streak as long as you can back it up. Given Beal’s work ethic, the latter shouldn’t be a problem. He was dedicated to eradicating his inferior pick-and-roll tics this summer, determined to unearth the creative potential head coach Randy Wittman saw in him when he forced Beal to take secondary ball-handling duties.

“Number one, ball-handling. That’s always a priority that I try improve on. Continuing to shoot off the dribble. My lateral quickness for defensive purposes, as well as offensive,” Beal says. “Being able to get to the basket and finish with contact. Learning how to take my time with everything that I do. Getting the shots I want and not necessarily what the defense gives me.”

Like any franchise in the wake of a surge, clearing the next hurdle will require more fine-tuning than high-flying histrionics. Beal says he and his Washington teammates know that, and they’re ready to take the next step.

“We have a target on our back. We’ve shown that we can play games. It’s up to us to accept that challenge and deal with it. We don’t want to just be good, we want to be great,” he says. “That’s gonna take time and effort and patience and hard work. It’s cliché, but we know what it’s gonna take to get there. It’s just up to us to go out there and get it done.”

Getting it done? Sounds pretty Pierce-esque.