It’s August in the suburbs of Minneapolis, and the air is sagging with humidity. Yet inside Panino Brothers, a suburban sports bar (and home of “the Rachel Kulakofsky Sandwich,”) it is almost aggressively frigid, and upon entry I am immediately blasted by air-conditioning of the Arctic variety.

I’m also met by a considerable din, a mélange of “Turn Down for What” blasting over the bar speakers, nine different flat-screen televisions cycling through stale SportsCenter reruns and, oddly, two more televisions broadcasting Kevin Costner’s 1999 film For Love of the Game. Above it all, the sounds of excited and lubricated men fill the icy air.

Today is the main event qualifier at the Minnesota Classic, one of six stops on the Power Events National Golden Tee Tour, and these men are here to work.

The Professionals: Meet the Guys Making a Living Off 'Golden Tee'

They are of the middle-aged variety, T-shirted, sandaled, hatted, a bit jocular but affable and endearing. They all seem to know each other, often referring to each other by last name only. Many of them are drinking alcoholic beverages, despite the early afternoon hours. They are intense and intent. They are in their element. These men are Bangers, so named because of the confident and comfortable aggression they display when continually banging on the trackball – the elegant white pearl that rests in the center of the wood-paneled Golden Tee console.

I order a Miller Lite to fit in.

They might not look like elite athletes (though some have worn their finest golfing attire today), but they possess elite skill at the game, honed over the years through countless hours of practice and untold amounts of alcohol at their local watering holes. They’re here because they’re the best in the world and want to play against the best in the world. For pride. For camaraderie. And for some, for mortgage money. Because Golden Tee is how they earn a living. 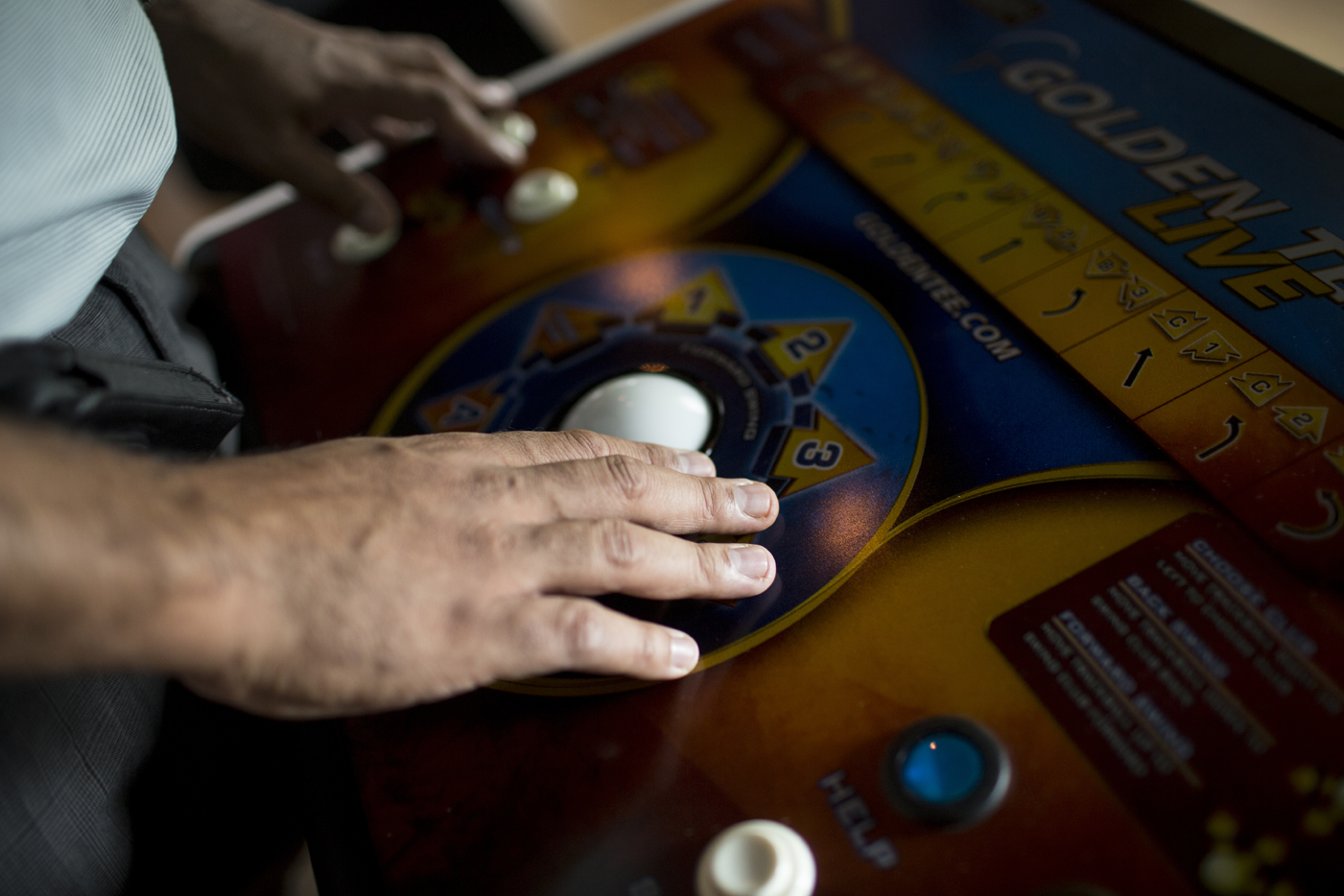 You are likely already very familiar with Golden Tee, America’s longest-running and most popular arcade franchise. If you operate a bar in North America, you are basically required by law to have a Golden Tee machine on the premises. Over 12,000 of them are currently in operation. Over 200,000 unique players typically shoot at least one game per month. And because Tee is legally considered a game of skill – rather than a game of chance like a slot machine or video poker – it has legitimately paid out more than $50 million in real dollars to players in online tournaments over the past decade.

How that absurd amount of money is distributed amongst all those individual players is where the Bangers enter into the equation, because not all Golden Tee players are created equal.

Some are Everymen, who enjoy a casual game paired with a pitcher of suds and a platter of nachos. “99 percent of our players are the Everymen, the guy who goes out once or twice a week with his buddies,” says Don Pesceone, a vice president at Incredible Technologies, the company behind Golden Tee.

Everymen dutifully put their money into the consoles and enter into online tournaments with up to 50 other players who are doing the same thing at the same time, in the hopes of (maybe) winning back their entry fee. Mostly, they’re just happy to be playing video-game golf whilst getting drunk with their friends.

Other Golden Tee players are something else entirely. They can smash drives otherworldly distances, deftly place the ball just feet from the cup on approach shots and display surgical precision in their short games. These are Bangers.

“It’s a joy to watch them. These guys are making shots I wouldn’t have even dreamed of attempting,” Pesceone says. “That’s the beauty of it. The game appeals to somebody who can play one time, and the people who play 50 games a day.”

Bangers have made the winning of these online contests their life’s work and primary source of income, and often play up to 1,000 different online games a month. The winner of each game takes home $10 minus their own per-game fees, which are often discounted for high-volume Bangers to encourage them to play more. Add it all up and the potential to earn serious money is there…if you’re good enough.

Andy Fox (Screename: Flying Train) is a Banger, and one of the best. The Apple Valley, Minnesota native is ranked second on the 2014 Tour leaderboard and is shooting a scintillating average of 24.34 strokes under par during tourney play. Over the excited shouts of the players around us at the tournament, I ask him what really separates a Banger from an Everyman. His response implies something magical and sorta wizardly.

“Understanding,” Fox, a modest and easy-going soul in his early 30s, says with a smile. “When I hit a shot, I can visualize in my head what the ball is going to do in the air, what it’ll do when it hits the green. I can see it all before it happens.”

But developing that skill isn’t about instinct or preternatural ability. It’s all about relentless practice, repetition and dedication.

“For a really long time I was only breaking even, or maybe making a few bucks a night, but not enough to support an income,” he adds. “I started playing 600-700 games a month and over time I just got better. That’s when I could start making a pretty decent living.”

Fox met his wife when she owned a bar where he spent hours playing Golden Tee. As he built up his now-elite skills, the two also built a romance. Years later, the couple have a 17-month-old daughter and Fox’s wife has chosen not to work any longer, selling her interest in the bar to focus on raising their child. Which means Andy and his unique ability to play pretend golf are the family’s only means of supporting themselves. 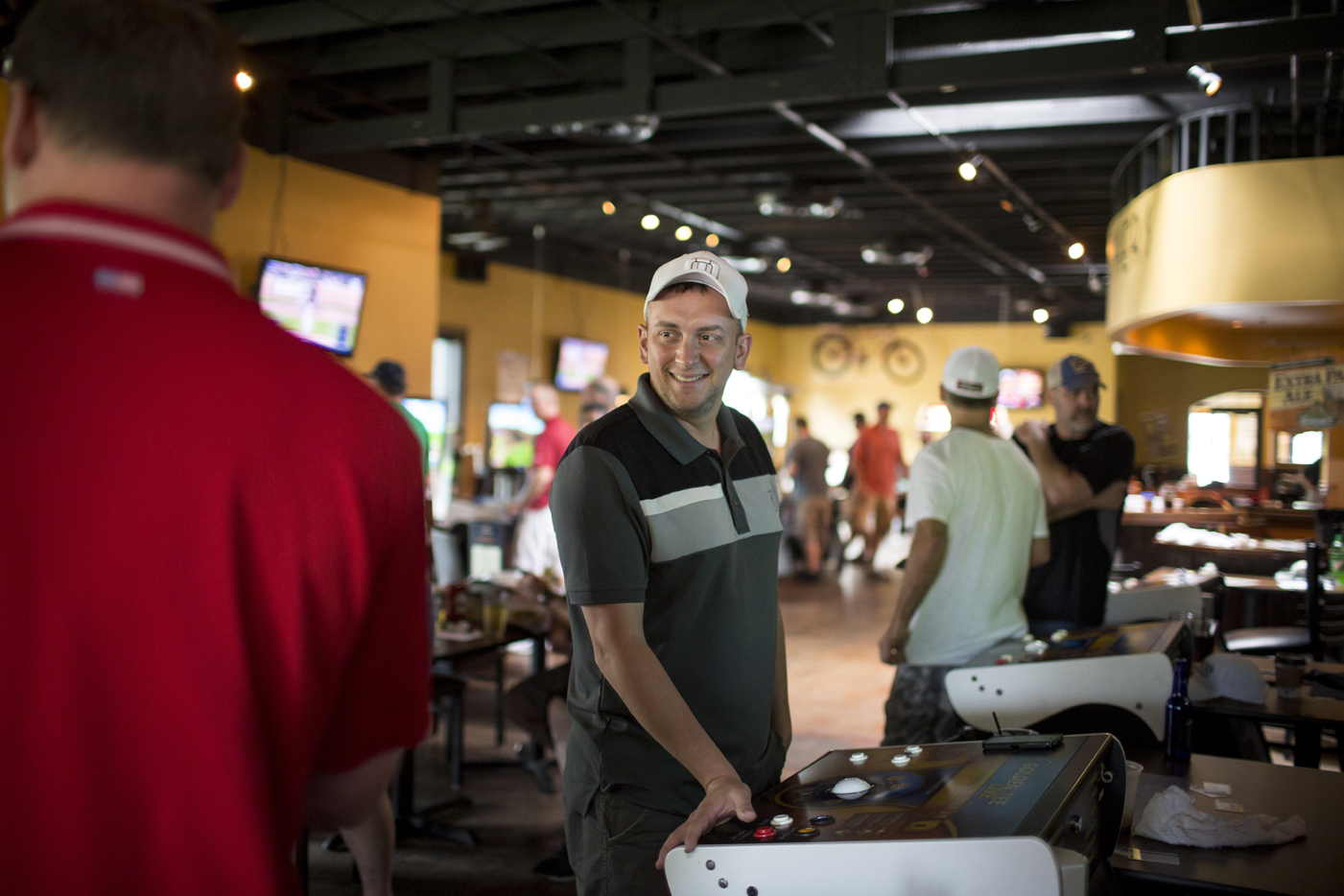 On a typical day, Fox will arrive at Bumper’s Sports Bar in Burnsville, Minnesota at 10:45 a.m., 15 minutes before opening. He’ll set up shop at the Golden Tee console and play for 7-8 hours until he reaches the maximum of 50 daily games that Incredible Technologies allows, a cap designed to ensure that Everymen can still fairly play a large number of games. On good days – and there have been more of these in recent years – Fox will earn upwards of $200 or more.

To maximize his potential for having one of those good days, Fox plays when more Everymen will be logging on (happy hour is basically a feeding frenzy for he and his Banger brethren). The trick is to avoid his fellow sharks while the blood is in the water.

“There’s about 15 guys around the country that do the same thing as me,” he says. “I’m calling them all day trying to figure out when they play so I can avoid them. The less of those people I run into, the more money I make.”

No matter how focused he is on his game – and how much maneuvering he does to avoid other Bangers – some days don’t go as well for Fox. Given his role as sole breadwinner, he can’t have too many of those days in a row. The small margin of error between winning an online game and breaking even (or worse) means that Fox’s unique job requirements basically demand perfection from him on a daily basis. Every micro-inch of trackball movement means significant differences in the outcome of the game and, thus, his payout checks, which he receives every two weeks from Incredible Technologies.

“If I’m having a bad day after 15 games I can’t go home and quit. I’ve gotta pick it up because I need to pay the bills. So it gets a little stressful sometimes,” he says. “The top-tier guys are playing these courses flawlessly. I can’t be watching the bar TV while I play. I have to focus or I can get down on myself mentally.”

Mark Stenmark (Screename: SUQ IT), another top player in the world and a native of Houston, gives this stress condition a name: “We call it ‘Banger Burnout Syndrome’ or ‘BBS.’ It does happen.”

“With all this pressure, is the game still even fun?” I ask, afraid of the answer. Fox pauses for a long time and scans the bar ceiling, considering the question.

“Yeah. Yeah it is. What’s nice is that I can come and go as I please. If my wife wants to have lunch, I can just leave for an hour to do that,” he reassures. “If I want to leave to go to Vegas for four days, no one can stop me. You can’t get that with a 9 to 5. I’m my own boss.”

Each hopeful in the Minneapolis Classic ponies up $100 to enter. That entry pool – along with cash considerations from Incredible Technologies and the bar hosting the event – makes up the cash purse these men are vying for in this tournament. For this leg, the winner of the weekend would take home $1,000. Additionally, the top four scores each player secures from the six tournament legs this year are accumulated into an ongoing 2014 Tour score, which determines their seeding in the final Player of the Year bracket.

That bracket will seed the top 32 players in a direct double-elimination tourney in Houston this December, where more than $12,000 will be up for grabs. 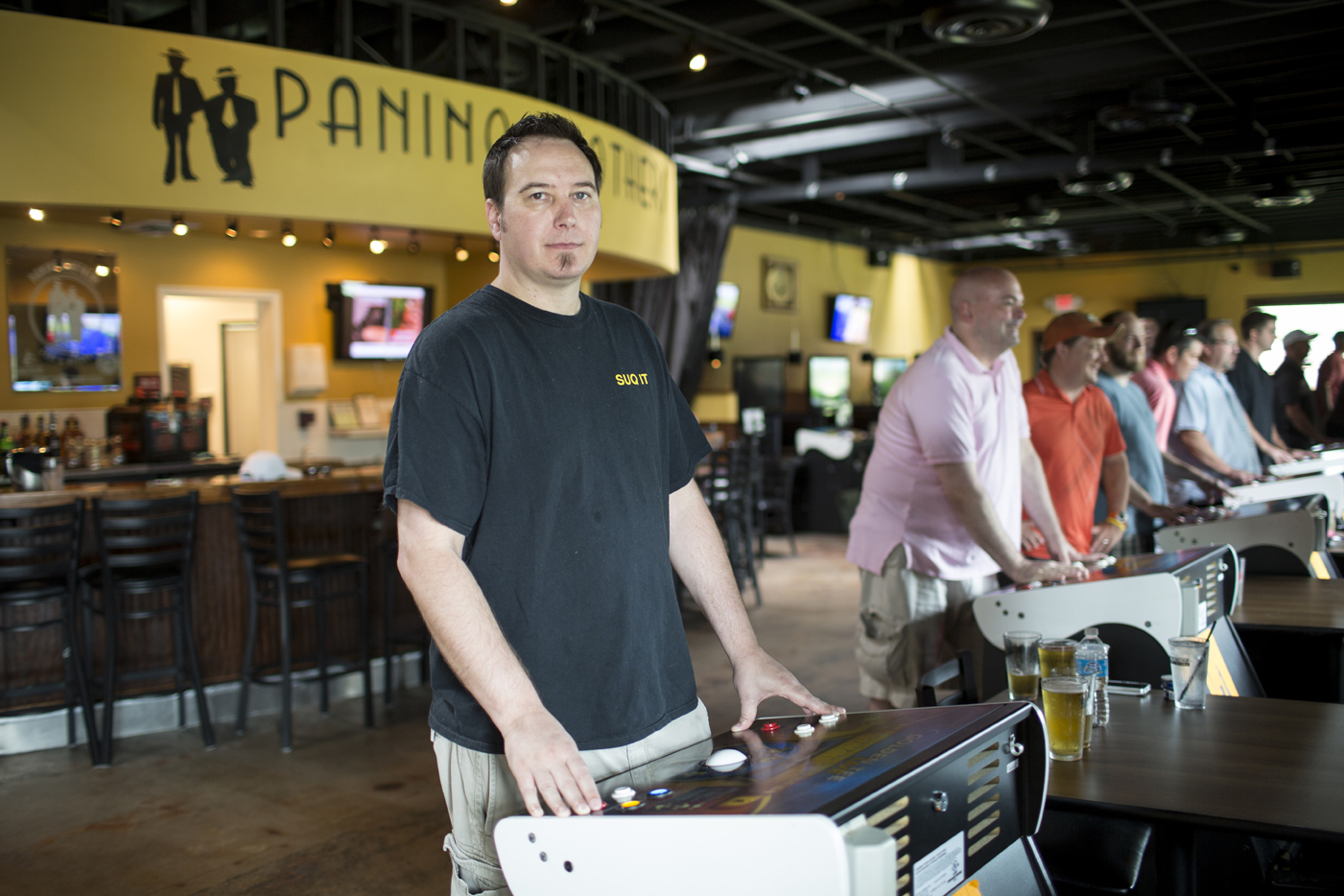 One might think that with all that cash on the line – and all these egos in one room – that the stirring of alcohol into the equation would create some tumult. How does it work having everyone fueled up on booze during the competition?

“Beautifully, actually,” Steve Sobel, one of the primary organizers of the National Tour, says with a laugh. “We’ve had 25 tournaments over the last few years and we’ve had maybe one shouting match in all that time. And they were hugging each other 15 minutes later. There’s some trash-talking, but the guys police themselves and we’ve never had any problems.”

The camaraderie is on full display on the tourney’s final day, which features a head-to-head, double-elimination bracket. Fifteen Golden Tee machines are placed throughout the bar, consuming the majority of the real estate, and groups of 3-4 men watch the action unfold…and the field of nearly 50 competitors slowly dwindle.

A few elite Bangers meet in the final matches of the tournament. Fox, Stenmark, Andy Haas (Screename: SHIP IT) and Chris Thorbrogger (Screename: Thor) face off in a series of epic battles, including some that go into the Golden Tee equivalent of overtime. The other recently eliminated tourney players all gather around the four, shouting in agony and ecstasy, drinks in hand, cheering them on.

In the end, 2013 Player of the Year Tournament runner-up Haas defeats Thorbrogger to claim the Classic title, and the $1,000 that comes along with it (in a show of class, he uses some of the prize money to buy shots for his fellow competitors). Fox finishes third, netting $625 for his efforts. The result also vaults him into second place on the overall 2014 Tour leaderboard, trailing only Evan Gossett (Screename: MEOW CHOPPER). Not bad for a weekend of work.

If Fox can win the Player of the Year Tournament, he’ll take home $2,500, which would be the largest daily payout he’s ever received in his Golden Tee career. While that would be a welcome sight to Fox and his young family, it’s just a temporary windfall. The daily quest for constant video-golf perfection is where he’ll truly find financial stability.

It’s a grind, and an uphill battle. Luckily, Fox has his band of Banger brothers to support him along the way.

His friend, Stenmark, puts it best: “We all root for each other. We all want to beat each other, but it’s a fraternity of sorts. We’re all brothers in the Golden Tee community.”