The sport of boxing is having one of its biggest and best years in recent memory. However, the result of Saturday’s anticipated showdown between Saul “Canelo” Alvarez and Gennady “GGG” Golovkin proved the sport still has all kinds of problems.

Touted as one of the most meaningful boxing matches of the past several years, “Canelo” vs. “GGG” ended in a controversial split draw. The fighters provided 12 competitive rounds of captivating action where Golovkin (37-0-1) outlanded Alvarez (49-1-2) in total punches by a count of 218-to-169, but the judges’ scorecards determined no winner.

Judge Adalaide Byrd, who has a history of sketchy scoring across various combat sports, turned in the most baffling card of all. She gave Alvarez the edge in 10 of the 12 rounds for an indefensible 118-110 win. Judge Dave Moretti saw it 115-113 for Golovkin, while Don Trella had it deadlocked at 114-114.

Mayweather Vs. McGregor Is Over: So, Now What?

The concept of the fight being a draw isn’t the most absurd viewpoint. Alvarez started and finished strong, while Golovkin’s effectiveness in the middle rounds stood out. Judge Byrd’s perspective was vastly different from most, though, which led the combat sports world to bring up words such as “corruption” in “rigged” in association with boxing. 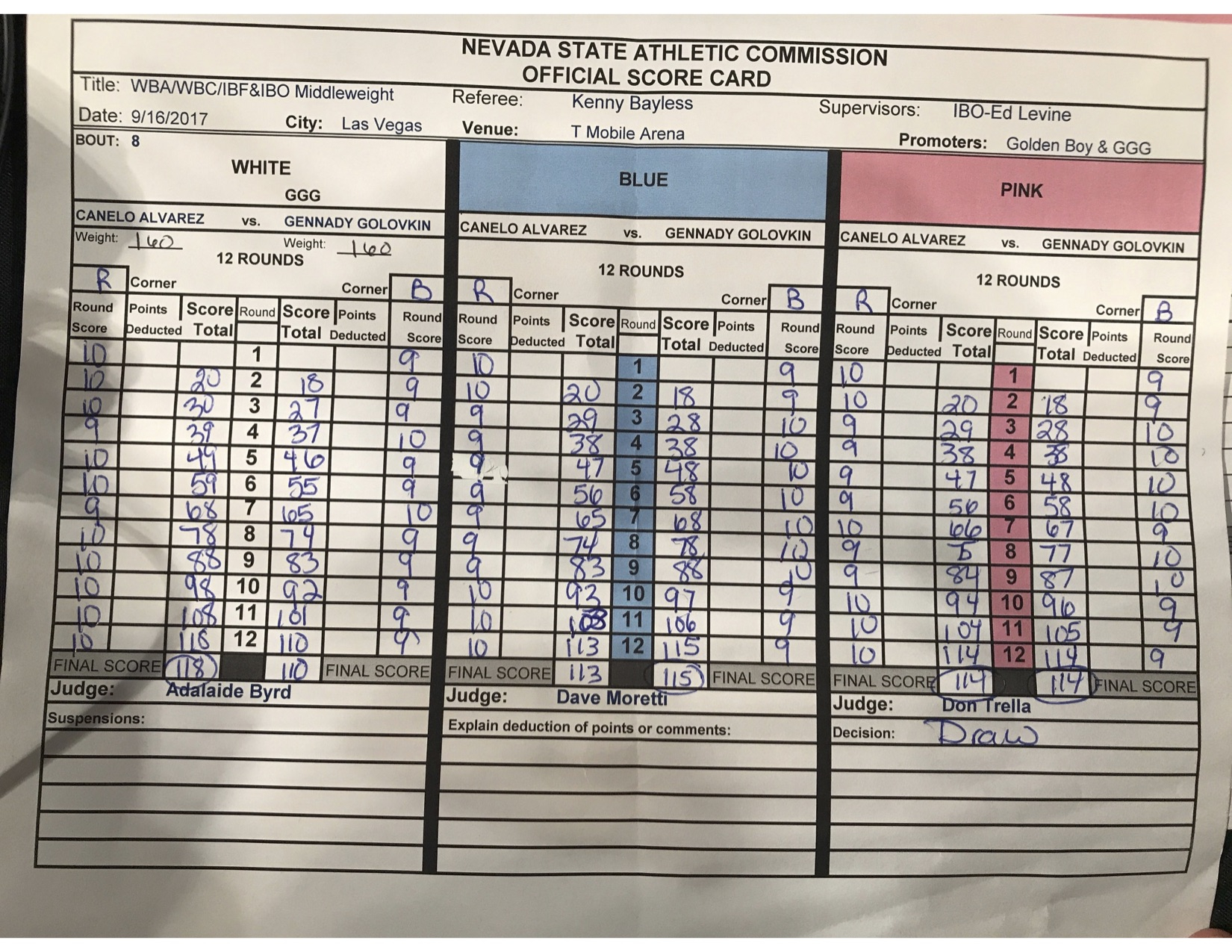 Bob Bennett, the Executive Director of the Nevada State Athletic Commission (NSAC), which sanctioned the fight at T-Mobile Arena in Las Vegas, didn’t do much to condemn Byrd’s scorecard, either. He admitted it wasn’t her best work, but did little to convince those outraged by the decision that any serious repercussions would follow.

“Adalaide, in my estimation, is an outstanding judge,” Bennett said. “She’s done over 115 title fights and/or elimination bouts. She does a great deal of our training. Takes a lot of our judges under her wing. I think being a judge is a very challenging position.

“Unfortunately, Adalaide was a little wide. I’m not making any excuses. I think she’s an outstanding judge, and in any business, sometimes you have a bad day. She saw the fight differently. It happens.”

Although the post-fight narrative should have been centered on the fact Alvarez and Golovkin, who were guaranteed purses of $5 million and $3 million, respectively, managed to largely live up to the hype inside the ring, the focus is instead directed at the quality of judging.

Such controversies are nothing new, and if forced to find an upside, the obvious one is that a future rematch – and perhaps even a trilogy – was perfectly set up with the result.

Golovkin, who retained his unified middleweight title because of the split draw, said there’s no doubt in his mind he wants to share the ring with Alvarez again.

“Of course I want a rematch,” Golovkin said. “I want a fight. I want a true fight. … It was a big drama show. [The scoring of the fight] is not my fault. I put pressure on him every round.”

The world knows #andstill Thanks to all my fans from all over the world for your support. It means a lot for me. ? @kazangapov.kz

Alvarez said he’s eager to clear up the controversy, as well, because despite the belief he won the fight, he not content with a draw going on his record and wants to do it again.

“I think I was superior in the ring,” Alvarez said through an interpreter. “I won at least seven or eight rounds. I was able to counterpunch and made Gennady wobble at least three times. If we fight again, it’s up to the people. I feel frustrated over my draw.”