It’s been a long time since any rookie player in Major League Baseball has made such a huge impact for his ball club, and left such large footprint upon the game in such a short period of time. It’s a rare occurrence, but when it happens, it’s special, and usually marks a new era for the sport.

As expected, The Wizard cleaned up in the trophy department, winning a Silver Slugger award and a Gold Glove, as well as a spot in the 2001 All-Star Game. Even more remarkable, Ichiro won both Rookie of the Year and league MVP in one season, the first player win to do so since Fred Lynn in 1975.

Now, in a year in which the New York Yankees were not even supposed to be a factor – all but written off by experts until at least 2018 – a new enigma has emerged in the Bronx. Aaron Judge, a hulking six-foot seven-inch rookie outfielder, is completely changing baseball hit by hit.

It’s not just that baseball’s marquee franchise are hot again, duking it out atop the contentious American League East with their hated rivals the Boston Red Sox, or that Judge is the latest power hitter following in the footsteps of Dave Winfield, Derek Jeter and Reggie Jackson. What stands out is that Judge is, in his own right, having an absolutely phenomenal and historic first full season. It’s a summer classic, the type that looks like it will be one for the ages.

Judge, who turned 25 right after Opening Day, leads not just the American League, but all of baseball in the home run department, with a current total of 26. Add to it that Judge also leads in slugging (he’s just shy of .700), as well as on-base percentage plus slugging, with an OPS of 1.139. He’s also currently tied for third in the majors in runs batted in and leads the American League in RBIs. Those are runaway Rookie of the Year numbers.

Even more remarkable for a first-year player is that Judge leads all players in Wins Above Replacement, a metric used to quantify a player’s entire contributions at bat and in the field. Judge’s contributions right now are Rookie of the Year stuff. And, if he stays on the same tear with these numbers – especially if the Yankees contend in the postseason – it would be very hard to make a case against Judge being named the American League’s 2017 MVP as well.

Whether or not you’re ready to place bets on Judge winning both of those trophies, or on the Yankees as a shoo-in to win the division much less a 28th World Series this year, Judge’s work so far still puts him in some legendary Yankees company.

Maybe most importantly, there are the dingers. The number crunchers at ESPN pointed out recently that Judge is already more than halfway to the 50 home run mark. That is significant for a few reasons.

First, the Yankees current, longstanding home run record for a rookie is 29, set by Joe DiMaggio in 1936. Judge is four home runs away, and could conceivably smash that 81 year old record before the end of June. The other half of it is that, should Judge stay on pace to hit 50 home runs by the Yankees’ final game on October 1st, he would also break the all-time rookie home run record, 49 home runs, set by A’s and later Cardinals slugger Mark McGwire in 1987.

Moreover, only 10 other times since 1901 has a Yankees player hit 25 homers inside the season’s first 70 games. Half of these were work of Babe Ruth, while fellow Yankee luminary Roger Maris had two of them. Alex Rodriguez, Mickey Mantle and Lou Gehrig had one each. Yet, not one of those five famous namesakes – four of them Hall of Famers already – hit as many as home runs in their rookie year as Judge has already in 2017.

This is all remarkable for a player who just a year ago might have been considered, at least according to stats, merely above average. Taking a look at Judge’s minor league numbers, his home run count each season was good but not astonishing, registering only 20 homers only once, in 2015. Meanwhile, Judge’s slugging rate in the minors only exceeded .500 twice; once when he was with the single-A Charleston RiverDogs in 2014, and then again in 2015, but not until after being reassigned from triple-A Scranton/Wilkes-Barre down to the double-A Trenton Thunder.

But for all of the success that Judge has amassed so far in 2017, none of it appears to be changing who he is.

Start with the fact that every media outlet from Forbes to TMZ, GQ to Good Morning America, not to mention the sports papers, are lining up with the hope to interview him. On top of that, Judge’s number 99 Yankees shirt is now Major League Baseball’s hottest selling item. Yet, it appears nothing goes to Judge’s head. He’s carrying himself in the way all the greats do, with that certain level of confidence and poise. Also, let’s not forget what team he plays for. The Yankee organization, the team’s fans and the local press have cracked many great talents in the past. 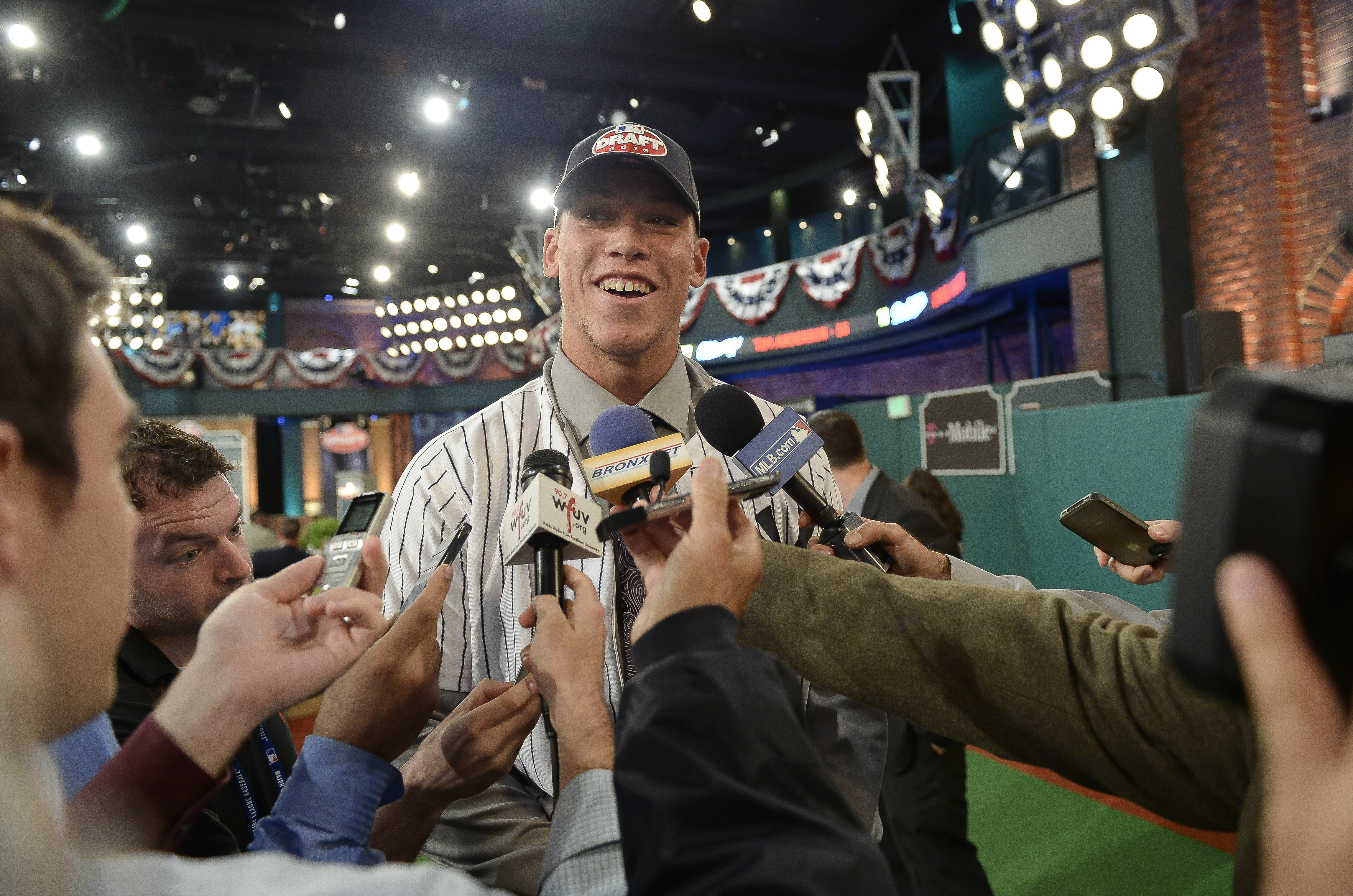 Take for instance the game against the Baltimore Orioles when Judge hit a 495-foot home run into the upper stands at Yankee Stadium. That astounding home run, hit on June 11th, was the longest ever since the Major Leagues started recording home run distances. But when asked about the feat by the Yankees’ YES-TV network, Judge brushed it off.

“It means nothing to be honest,” he said. “I’m just glad we came up with a win.” In typical fashion, Judge ended up changing the subject of the conversation, opting instead to talk about his pitching staff, Yankees teamwork, and a nice debut by reliever Domingo Germán. Forget that Judge also had his first career four-hit game that day.

With such a humble attitude off the field and a tenacious work ethic on it, it’s fair to say that Judge, who first signed with New York as a prospect back in 2013, is more than just the ideal rookie player for any team, in every sport. He has become perhaps an ideal leader for the Yankees in the new post-Jeter era.

Much like the Chicago Cubs breaking the team’s long World Series drought last season, the “huggable hulk,” as one New York paper recently called him, offers a new beacon of optimism in baseball, and a chance for fans to be awe-inspired once again. Even better, Judge, with his modest demeanor and boy-next-door style, just might do the impossible: win over generations of baseball fans who grew up hating the New York Yankees.