Aaron “Jaws” Homoki isn’t indestructible, but with each death-defying drop he survives – and every beer he butt-chugs – he gets ever closer to achieving immortality.

The 25-year-old street skater started out like most kids do – on a Walmart board his mom bought for him. But in short time, Homoki was hitting slappy curbs and ledges with his childhood pal, Dakota Servold, and discovering an affinity for dropping off from lofty heights. In 2007, Homoki showed up in Peter Vlad’s Wonderful Horrible Life video, but it was his part in Buster O’Shea’s A Happy Medium that put him on the map – and on Tony Hawk’s radar. After seeing Homoki’s performance, including a gnarly drop-in ender at the legendary White Walls in Arizona, Hawk extended an invitation to join the Birdhouse skateboard team.

The Impossible Rise of Nyjah Huston

“The White Walls are really fucking scary. It’s a huge drop,” Homoki recalls. “They asked my dad to be there just in case I got smoked and had to go to the hospital. But, you gotta risk it for the biscuit.”

Since turning pro, Homoki has continued to defy conventional skateboarding (and the laws of gravity), having dropped some seriously heavy video parts in the Happy Medium trilogy, Dekline’s True Blue and the Berrics’ Push series. Homoki has also dominated the Thrasher Magazine King of the Road competition, a cross-country skateboarding scavenger hunt complete with gross-out stunts (like the aforementioned butt-chugging). And he’s just premiered his part in the Berrics’ In Transition series, where ten skaters choose one location to film a full transition part. From there, it’s up to the fans to vote for their favorite. “I filmed at Paradise Valley Park – it’s literally down the street from my house. My plan? Get weird for it,” he laughs.

Homoki came to my house for our interview straight from a full day of skating. He showed up beaming and covered in dirt, and took a seat at my dining room table – where he produced a mouth harp from his duffel bag and began playing techno rhythms (“It’s so much fun, dude! I get high as fuck and play this thing!”) Over the next few hours, Jaws opened up about his greatest feats and worst injuries, shared highlights from this year’s King of the Road tour and revealed his share of unsavory experiences as landlord.

You’re pretty much El Toro royalty, with more tricks down the 20-stair than anyone else. Have you been back recently, or do you have anything planned for the future?
Well, both, actually. I was just there for King of the Road. Heath Kirchart was on my team and offered me his share of our potential winnings if I ollied that shit naked and covered in shaving cream. I was down to try it. We even joked about ramming the fence with the team van. But by the time we got there, my body was completely shot from spending several hours learning to darkslide a rail. We were out of time and I was done. 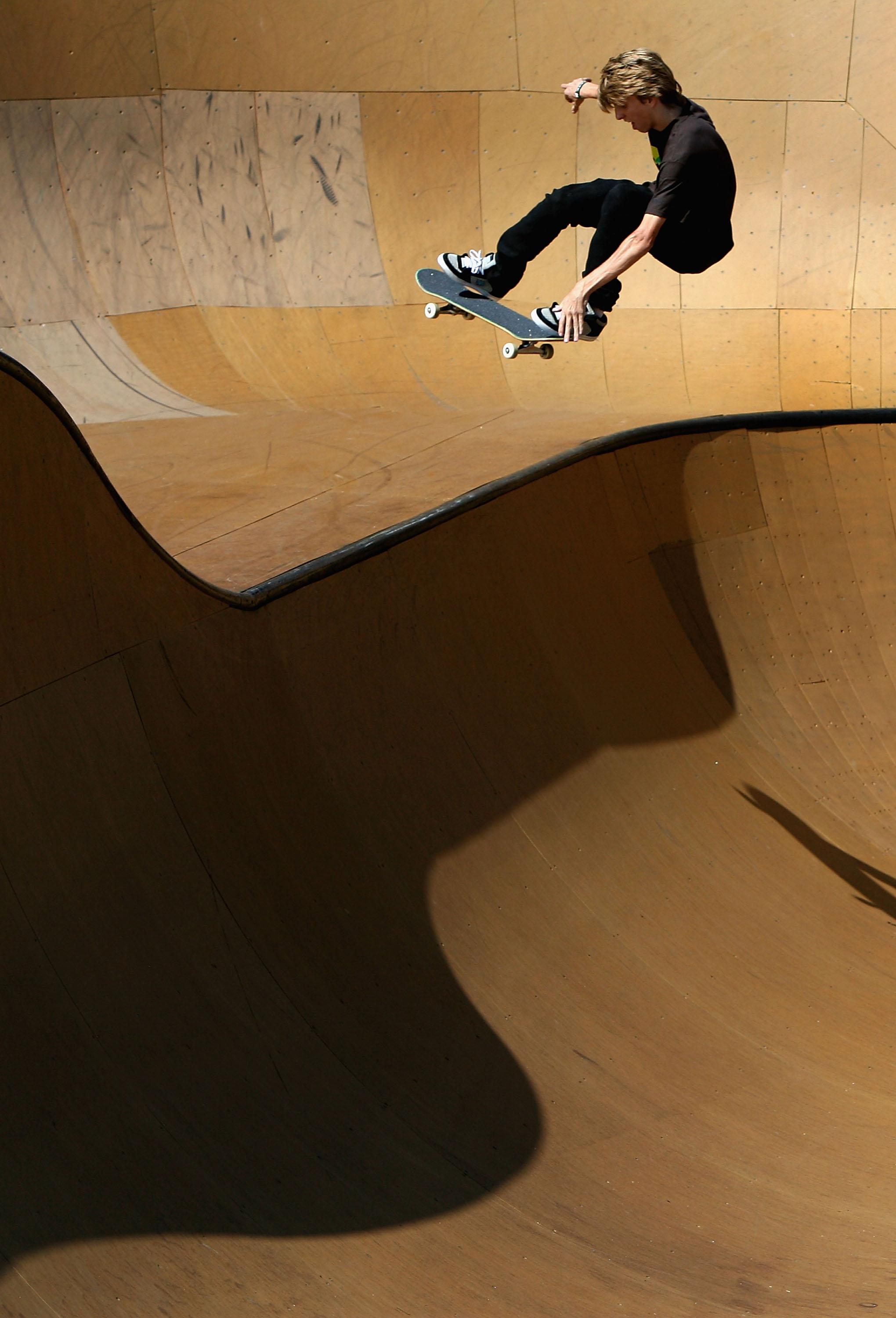 To date I’ve done an ollie, a stalefish grab, a melon grab, a tuck knee grab and a kickflip melon grab [at El Toro]. The last trick took me 7 or 8 tries – I don’t remember. The dream for my next trick there is a heel flip. I’ll try it, but I don’t think it’s going to happen. You only get a handful of tries – it’s too massive of a drop to keep hucking yourself down it. Chris Joslin could kill it there. That tre flip he did down the Davis gap was fucked. I’d be hyped to sesh El Toro with him.

Speaking of King of the Road, last year your teammate Clint Walker duped you into butt-chugging a beer for the best prank challenge. Did anyone try to do that again this year?
Last year was super fucked-up. They took this giant beer bong with a wide tube and shoved in my ass. It was fucked. Clint was staring directly down my bunghole and he puked. This year they actually made it the official “most fucked-up” challenge, so somebody on each team had to do it – and I did it again! Only this time, we went down to a beautiful riverbed and filmed it there. I put a way smaller funnel in my ass and chugged a nice cold Busch beer. I don’t give a fuck. I’ll butt-chug a beer and have the shits for a day before I get a tattoo that’s gonna stay for the rest of my life.

This past summer, you were also on a Euro tour with Tony Hawk and the Birdhouse team. How was that?
The Birdhouse crew always does a big annual demo tour. This year we went to Europe, right after Tony got married – it was basically his honeymoon. The tours are super fun because Birdhouse always gets these crazy companies to sponsor the tours. On our 2011 tour, YoYoFactory sponsored it and I actually met the coolest chick I’ve ever been with – a professional yo-yoer. She’s actually one of the top professionals. I saw her and was like, “Yeah, whoa, you’re hot!” We hooked up on that trip and that was it. We tried to meet up again after the tour, but it didn’t work out. She bailed for Thailand, on some life quest or something. I don’t know if she was the one – she might have been. I don’t like to think that far ahead.

You’ve said that one of your favorite tricks in a video was a varial heelflip into a steep bank, because it was the first trick you’ve done drunk. Have you skated anything else while drunk lately?
I usually skate high, not drunk. But I was in drunk in Copenhagen recently and got a sick trick that no one has seen yet. I did a boardslide on a rail, but I dropped down to my butt and then pulled out, landing back on my board for the rollaway. I don’t know what to call it. It was funny as shit and I did it straight-up day-drunk. I’m actually going to use the clip for something, so it’s coming soon to a video part near you [laughs]. But that’s the last one. I haven’t been skating drunk too much lately. You lose balance and make bad decisions.

You just dropped a heavy video part for the Push series. The clip of your ollie over the staircase for your ender is insane. What was filming that like?
Jared Lucas and I had nine months to film for it. I tried to keep it mostly around my zone – Phoenix, Sedona, Scottsdale, a few spots in Cali and Texas. I’m able to operate better in my area, and I sort of know what I want to do and where to go. Jared and I would go to all these spots and then pull off the road and camp out; that shit was so awesome.

I worked really hard on this part and I’m super stoked on it. That last drop was about 13 feet high and really far to clear the rail. I knew I didn’t want to kick the board out because that hurts way more than landing on your board and sticking it. I had kicked out twice before, and one of the times the board hit me in the face. That shit was not cool. On the make, I just sort of blacked out and then it was over and I was rolling away – but only on three wheels! In the video, when I land, you can see my back wheel blow up and come completely off my board.

Each time you land a massive drop it seems like you dodge a bullet. Is the worst injury you’ve had from that fall in A Happy Medium?
Yeah, that’s the one where I ruptured my spleen and got all fucked up. My eyes rolled back up into my head, but stayed open. It happened in Phoenix – I still have the proof [shows lengthy scar on stomach]. I felt fucked up after that slam and that night, I woke up to take a piss, but I couldn’t. Nothing came out, and I had to pee so badly. I told my mom something was wrong and we went straight to the emergency room. They did an MRI and put me right into surgery. The surgeon said they were going to take my spleen out, but they were actually able to sew it back together. Without your spleen, your blood cells don’t reproduce and can’t filter your blood as well, so it’s definitely better that I have my good ol’ spleen still in there.

You bought the house across the street from your parents and ever since, have dealt with bad roommate experiences. Has that improved at all?
Well, not really. You know that saying, “You never know somebody until you live with them?” Holy shit – you really don’t. People just keep staying at my house and not leaving. This dude Boots moved in with his dabber rig, a crazy contraption you use to smoke highly concentrated hash oil. It’s like a super-bong and you use a torch to light the oil, so it looks like you’re smoking meth. You get high as fuck when you smoke that shit. Boots’ entire life is attached to this fucking dabber rig. He came over to my house one day and just never left. I told him he had to start paying rent if he was going to stay, and that fool still didn’t pay. It’s so jacked. He’s living rent-free in my house, and I can’t communicate with him because he’s always dabbed-the-fuck-out.

Did you kick him out?
No! When I get home, that’s the first thing I’m gonna do. It’s fucked up. He’s probably sitting on my couch right now, watching Dragon Ball Z, high as fuck. Boots is getting the fucking boot as soon as I get home.

Maybe you should consider cleaning out your place and calling up the yo-yo girl –
Actually, I just met up with her in Prague and we hung out for three days. She had visited Prague and decided to move there and go to school. It just so happened that Prague was the last stop of our tour. I hit her up and she said I could stay with her – so I changed my flight, went to her place and that’s when she told me she had a boyfriend. I was like, “What the fuck?” So I didn’t get laid, but we still had a great time. I was good with keeping it mellow.