Aaron Hernandez‘s twisted life ended with a twisted bed sheet wrapped around his neck. Like everything else about how he lived, nobody saw his jail-cell suicide coming.

For most of his life, on the football field and off, the former New England Patriots’ tight end wore a mask. It finally cracked moments after a jury in Boston declared him not guilty of a double homicide last Friday, when tears filled his eyes. It was the first emotion other than a smirk, a smile or a scowl he’d shown since June 26th, 2013, the day the former New England Patriots’ Pro Bowl tight end was arrested on a separate charge of murdering his friend Odin Lloyd.

Hernandez had already been convicted and sentenced to life in prison without possibility of parole in the Lloyd murder before this second trial began, so even though he was exonerated in the drive-by shooting of two office cleaners named Daniel de Abreu and Safiro Furtado, nothing really changed for him except those tears.

Aaron Hernandez: The Gangster in the Huddle

An hour or so after acquittal, he was back in his cell at the Souza-Baranowski Correctional Center in Shirley, Mass., alone with whatever demons put him there with little reason to believe, despite the bluster of his high-powered defense attorney Jose Baez, he would ever walk free despite a pending appeal of the Lloyd conviction. As it was, he’d just been convicted of an additional gun charge that carried an additional five-year sentence to be served after the Lloyd sentence so even if he somehow won his appeal he wasn’t going anywhere any time soon. Or was he?

Two days later was Easter Sunday, a day of redemption for many Christians – but not for Hernandez, whom some say had begun to find jailhouse faith himself. Just over 48 hours later he talked with his loyal, long-suffering fiancée Shayanna Jenkins-Hernandez until the phones were cut off at 8 p.m. and all inmates were returned to their cells. Hernandez went in alone, prison officials say. There have been, as yet unsubstantiated, reports he smoked K2, a powerful synthetic marijuana, then applied soap to the floor of his cell to make it slippery in case he had second thoughts about what he was about to do.

Hernandez was alone until 3:05 a.m., when a guard making a routine tier check found him hanging from a bed sheet tied to his window and frantically tried to open the cell door. Hernandez had jammed it shut with cardboard.

What the guard found was a dead man who had once signed a contract worth $39.5 million on his knees wearing one last mask. Scrawled across Hernandez’s forehead in red ink was a Biblical reference: “John 3:16.” It is a gospel about salvation, something Hernandez could not find in life, no matter how fast he ran or how many footballs he caught.

By his side was a Bible opened to that passage, which reads: “For God so loved the world that he gave his only begotten Son, that whosoever believeth in him should not perish, but have everlasting life.” Lined up neatly next to it were three notes, one to his four-year-old daughter Avielle, a second his fiancée. None relieved the shockwaves from the final act of an apparent psychopath who was more confounding than a chameleon.

“He was a master manipulator,” Bristol County sheriff Thomas Hodgson tells Rolling Stone. Hodgson got to know Hernandez intimately during the 18 months he was locked up in the Bristol County jail before the Lloyd conviction. “He never showed anything but complete control. This is something I never would have expected. I’ve known Aaron Hernandez to be somebody able to completely control – almost like a metal trap – things he’d let in and let out. All the time he was here he never showed much emotion.'”

Because of that Hodgson found Hernandez’s tears odd and troubling. “It was a deviation from a pattern of controlled behavior,” he says.

Tha­t left Hodgson wondering if a jury siding with him had somehow penetrated the iron façade of indifference to the world he’d worn seemingly since his father Dennis died unexpectedly from a routine hernia operation when Aaron was 16. By all accounts, Hernandez and his father had been inseparable and when he died the budding football star put on his first mask, one of cold refusal to mourn the loss of the most important man in his life.

His brother said he never cried. His mother insisted he was never the same. He told Hodgson he had gone to his father’s grave only once and never returned. Not long after that, he drifted into constant dope smoking and what appeared to be a fascination with gangs, guns and thug life.

His body became a tapestry of tats, some reminding him of his father’s wise counsel, others of smoking guns. One with five bullets missing and the words “God Forgives” written backwards so it could be read in a mirror led prosecutors to believe it was in commemoration of the shooting of Furtado and de Abreu.

His gifts caused him to become an All-American at Florida but repeated brushes with the law and failed drug tests turned a first-round talent into a troubled fourth round draft choice. But his pass catching skills convinced the Patriots to hand him a five-year, $39.5 million contract extension one month after the Cape Verdean cleaning men were shot to death by an unknown assailant. 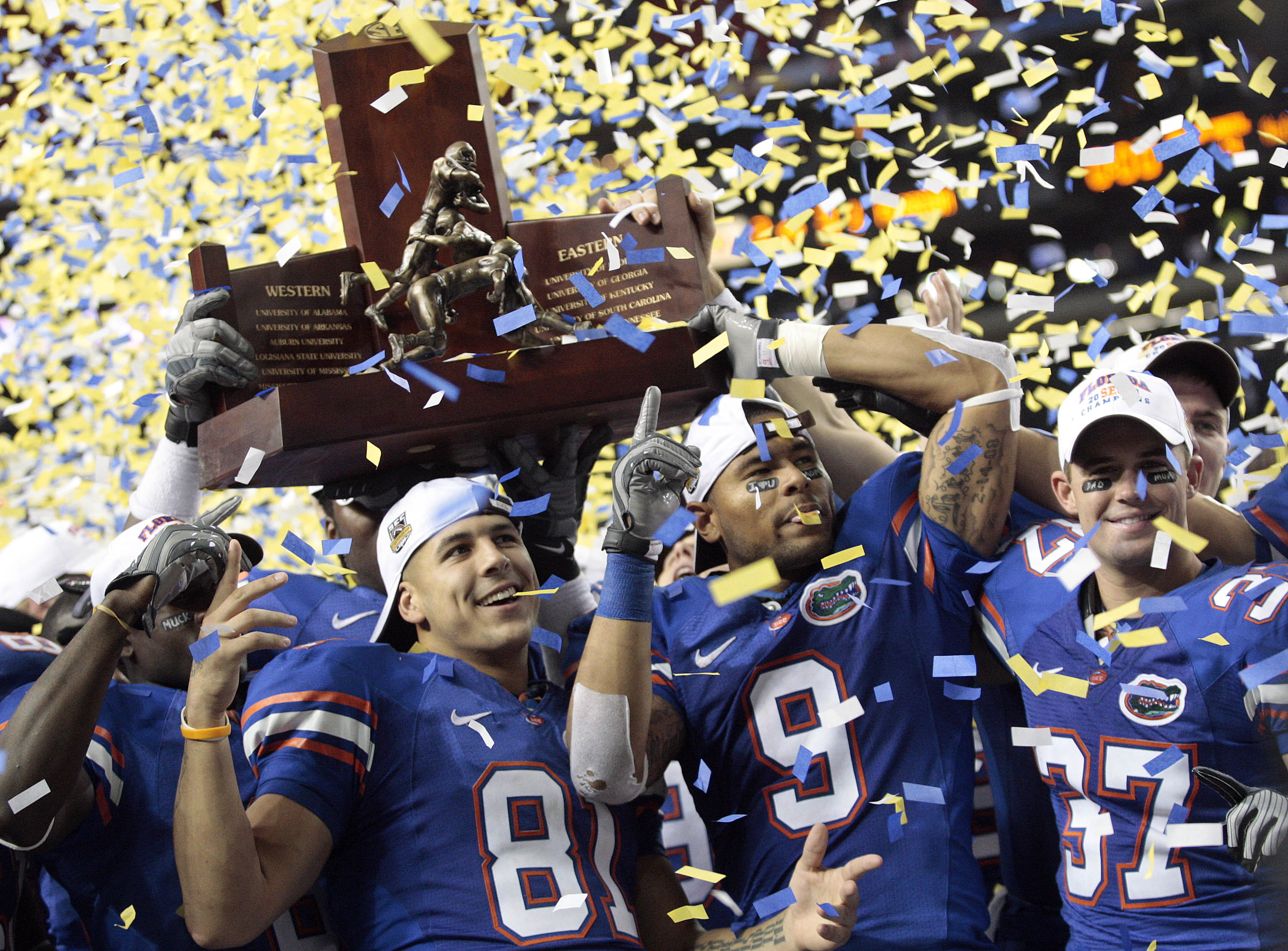 At the time he signed, Hernandez cryptically said, “I was one of the persons that, I came here, I might have acted the way I wanted to act, but you get changed by Bill Belichick’s way. You get changed by the Patriots’ way. Now that I’m a Patriot, I have to start living like one and making the right decisions for them.'”

By then he’d been a Patriot for nearly three years. By then de Abreau and Furtado were also dead.

Four months later an associate of Hernandez’s, a smalltime drug dealer and enforcer named Alexander Bradley, was shot in the face and left for dead. Later he would say Hernandez did it.

Eleven months later, Lloyd’s body was found riddled with bullets a mile from Hernandez’s home. In nine days, Hernandez was arrested on murder charges, released by the Patriots and never spent another night outside a prison cell like the one where he was found dead by his own hands at 27.

In six years he’d been either a suspect or a defendant in six shootings in which three people were killed. He’d been incarcerated longer than he’d played in the NFL. And he’d become an enigma to all who encountered him.

“I’ll tell you, this guy Aaron Hernandez was the best I’d ever seen at manipulating, at being able to use his personality to make you believe he was somebody very different,'” Hodgson says. “You had a hard time not liking the guy, but he was also volatile. He could go from 0 to 60 like that. His trigger was always around feeling disrespected.”

But something pierced that armor at some point but we may never know what. A vulnerability had been created for which he had no answer but final escape.

According to several sources, Hernandez had begun to read more. Hodgson reportedly encouraged this habit, suggesting he begin with a book of life lessons, Tuesdays With Morrie. Hernandez talked with friends about it and allegedly his old college teammate, Mike Pouncey, who stayed in touch with him, told Hernandez he read it on his recommendation.

He also began reading a Bible in his cell at Hodgson’s suggestion. When Hodgson later asked him if he was reading it, Hernandez had a startling response. “He told me he used to read it with a coach at Florida. He’d gotten away from it but he liked it,'” Hodgson recalls. “I asked him if he was reading the one in his cell. He told he was. He said he opened it randomly ‘and it was all about me.’ He had a way of only letting in what he wanted.”

In his last days, court sources claim, Hernandez was more engaging with guards, court officers and his legal team. He joked with one clerk about his need for a haircut even though he was bald and reportedly had given away to other inmates many of his possessions. Was his new-found elation a result of knowing how his story would end when others did not? Was his suicide a desperate act or one last defiance, a statement of total control?

Back at Souza-Baranowski, he spent his final hours outside his cell socializing with gang members, having started a fitness program for some of them and joining in pickup basketball games.

After his death, a long-held rumor went viral alleging Lloyd had caught him in a “compromising position” with another man and was killed for fear he would out Hernandez. This was an unpublished rumor among investigators and some long-time court reporters, and one that Hernandez allegedly denied to a jailhouse confidant several days before his death. Like so much else about him, we’ll never know.

An autopsy was performed, confirming suicide and finding no signs of foul play. Hernandez’s family requested that his brain be released to Boston University’s Chronic Traumatic Encephalopathy Center to test for the presence of CTE, the protein that causes dementia and brain damage in victims of concussions and brain trauma that has been found in unusually high proportions among former football players. But before the chief medical examiner could do that, Baez called a press conference outside the medical examiner’s office claiming the state was “illegally” refusing to turn his client’s brain over to researchers.

To the end, Hernandez had proclaimed his innocence and, in an odd way, his suicide will support that because of an obscure Massachusetts’ legal principle called “abatement ab initio.” Although he was convicted of the Lloyd murder two years ago, because his appeal was not complete before his death the case reverts to its original status as if the trial and conviction never happened.

This can be challenged by the Bristol County D.A. or Lloyd’s family, who already hold a summary judgment against Hernandez in a wrongful death suit. Both Lloyd’s mother, and the IRS have attached his estate, which includes an unsold mansion on the market for $1.3 million after $200,000 was slashed from the asking price when it failed to gain an offer, but their chance of prevailing after his death is unlikely in the opinion of legal experts familiar with the law. That legal technicality could also result in the Patriots having to return a multi-million dollar bonus payment to Hernandez’s estate after having withheld it following his first arrest in 2013 claiming the arrest alone voided his contract for conduct detrimental to the team.

The Patriots are likely to win that argument but even in his grave Aaron Hernandez will wear one last mask. He will go there an innocent man in the eyes of the law. A master manipulator to his final breath.

“I’ve wondered about that,” Hodgson says when asked about what finally led Aaron Hernandez to soap his cell floor and then wrap that bed sheet around his neck. “Was he thinking, ‘I’m going to go out with people wondering if I’m truly innocent. I’ll write the ending for myself.’ With a mind as complicated as his, we’ll never know.”

Ron Borges is a sports columnist at the Boston Herald.