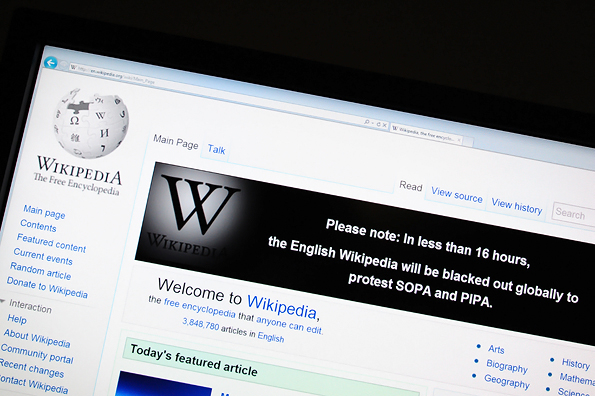 It’s like Y2K all over again – except this time, the Internet is going rogue. On Wednesday, Wikipedia will perform a complete 24-hour global blackout of its English-language encyclopedia to protest the Stop Online Piracy Act (SOPA) and the Protect Intellectual Property Act (PIPA) legislations, both currently up for debate in Congress.

In an attempt to curtail the Napster generation that is so fond of illegal online file sharing, the U.S. Chamber of Commerce and the Motion Picture Association of America have pushed SOPA in the House and PIPA in the Senate. If passed, the bills would force Internet providers to block websites that host pirated content. Similarly, search engines will be forced to stop surfacing links to file sharing services.

But Wikipedia founder Jimmy Wales believes these controversial measures will set a “frightening precedent” of censorship that goes against the ideal of having an open Internet. Other online giants like Google, Yahoo and Facebook have rebuked responsibility for their users uploading pirated content, not wanting to take on the role of cyber police.

“While I support their goal of reducing copyright infringement (which I don’t believe these acts would accomplish),” wrote Google co-founder Sergey Brin back in December, “I am shocked that our lawmakers would contemplate such measures that would put us on par with the most oppressive nations in the world.”

Reddit, TwitPic, Mozilla and Worpress will join Wikipedia tomorrow and shut off their sites for 12 hours, while Google will feature a homepage link stating their opposition to SOPA. Other popular services like Twitter, Tumblr and eBay have voiced disapproval of SOPA but will not take part in the blackout.

This week, President Obama said he would not sign SOPA if passed, temporarily calming whatever fear of censorship (or added responsibility) Silicon Valley may have had.

According to a White House statement, “We expect and encourage all private parties, including both content creators and Internet platform providers working together, to adopt voluntary measures and best practices to reduce online piracy.”

PIPA is scheduled to go up on the Senate floor on January 24.