Last Friday, a jury of six Floridians awarded Hulk Hogan $115 million, saying that the website Gawker had violated his right to privacy in 2012 by posting snippets of a video showing the wrestler, who had sued under his given name Terry Bollea, having sex with Heather Clem, wife of Florida shock jock and former Hogan pal Bubba the Love Sponge.

That initial amount didn’t include punitive damages – the same jury returned to the courtroom on Monday and awarded Hogan an additional $25 million in those. With this enormous $140 million total award, the jury seemed to say that Gawker Media could not be deterred from similar violations in the future and maybe its entire way of operating needed to be stopped.

Those ordinary citizens who decided in Hogan’s favor may, like so many of their fellow Americans, hold an opinion of the news media that’s distrustful if not downright hostile. But judging from the public response to the verdict, Gawker would have had a hard time finding a sympathetic jury of six journalists. The overwhelmingly unsupportive response from analysts was that while Gawker may have been operating at worst in a legal gray area, that didn’t make its actions ethical, and, anyway, Gawker was, you know, Gawker.

Consensus among First Amendment experts is that even if an appellate court upholds the verdict, which is by no means a certainty, the case would probably be decided so narrowly that the effect on journalism would be minimal. A ruling against Gawker could say, for instance, that while reporting on the existence of a celebrity sex tape is clearly newsworthy, publishing excerpts from the tape itself would not be. At worst, says George Freeman, from the Media Law Resource Center, an organization that typically takes an expansive view of First Amendment protections, a ruling against Gawker would be, “bad for the future of sex tapes.”

And unless (or until) such an appellate decision arrives, privacy law, in Florida and in the United States generally, remains unchanged. Jury verdicts set no legal precedent. That’s a fact so frequently lost on even supposedly informed commentators that it’s worth mentioning again: Jury verdicts set no legal precedent. Juries are not empowered to interpret the law, but merely to assess the credibility of factual evidence.

That’s what juries are supposed to do, anyway, but since their decisions are shrouded in mystery we outsiders interpret them according to our beliefs. Anyone who disagrees with a verdict believes a jury twisted the law to fit its own prejudices. But at the risk of sounding hyperbolic, it might be said that the Gawker model of journalism was itself on trial in the Hogan case.

As many have noted, the $115 million initial award is not only $15 million more than Hogan sued for, but it’s more twice the $55 million a jury awarded Erin Andrews earlier this month in a suit against a man who filmed the sportscaster through a hotel room peephole without her knowledge. (Americans usually complain about the excessive amounts juries award to plaintiffs – that is, until those Americans become jurors themselves.) Gawker owner Nick Denton is on the hook for $10 million of the $25 million punitive damages, and A.J. Daulerio, the editor of Gawker.com in 2012, was assessed $100,000 in punitive damages.

As the trial progressed, the institutional culture of Gawker itself came under scrutiny. The electronic paper trail that Gawker employees left is a defense lawyer’s nightmare, laying bare all the backchannel gossip and cattiness of office life. John Cook, the current executive editor of Gawker Media, was asked why he re-posted an uncircumcised dick pic that he’d seen on Andrew Sullivan’s blog. If anyone should worry about the chilling effect to come from this verdict, it should be Slack and other chat services that journalists use, and whose records can be subpoenaed in future cases.

There’s an element of schadenfreude in seeing journalists exposed this way. Celebrity gossip sites insist that public figures deserve to be seen at their worst – even that a public figure’s most embarrassing moments are, in essence, also the truest. This case allowed Hogan’s lawyers to turn the tables, and their efforts to depict Gawker as less a news publication than a free-for-all of oversexed amateurs bottom-feeding for page views was all too successful. Given an opportunity to submit a question to Emma Carmichael, then Gawker’s managing editor, the jury asked if she had slept with her bosses, Daulerio or Denton. 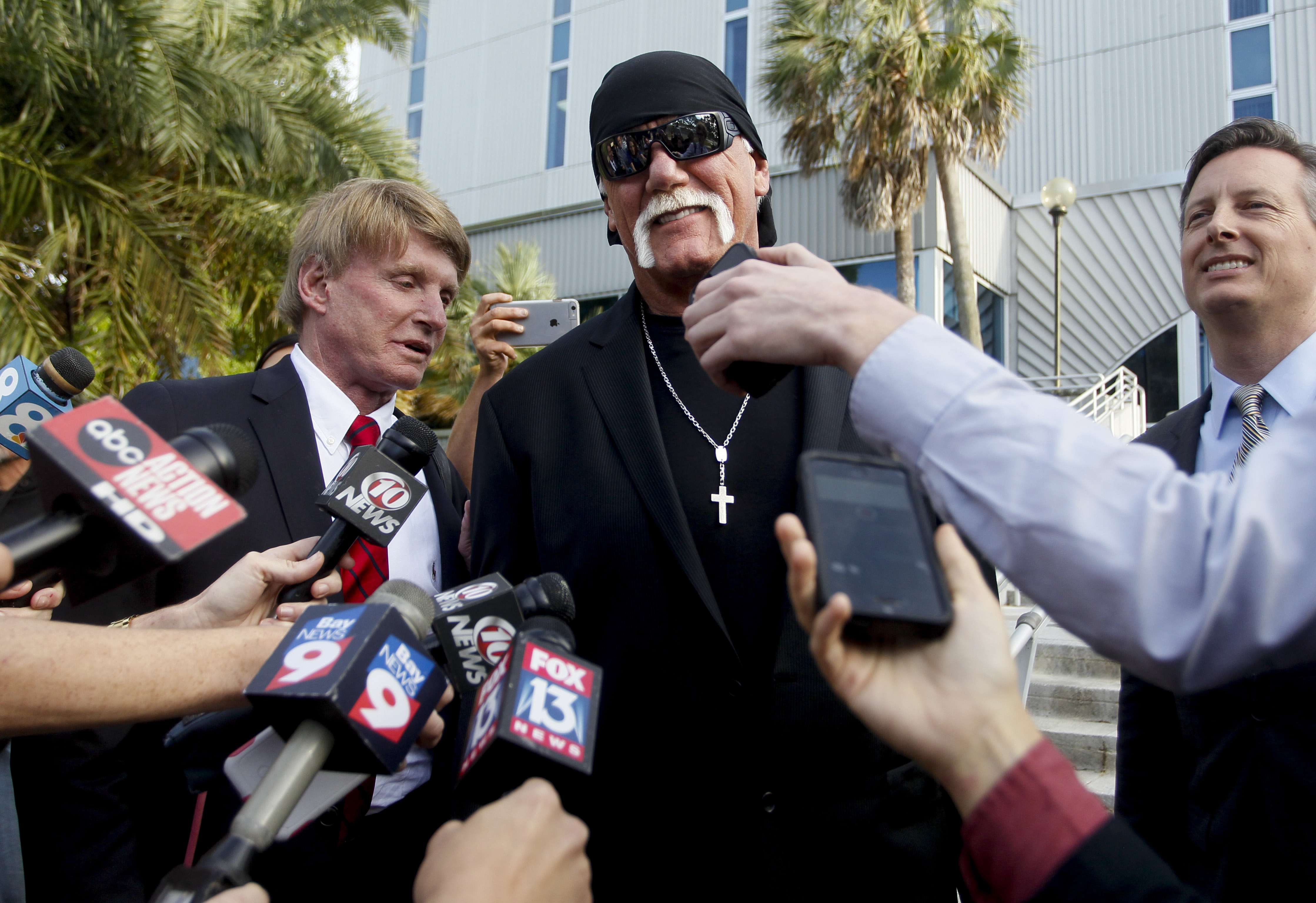 Of course, the most frequently quoted head-slap moment from the trial came in a taped deposition from Daulerio, the editor who posted the one minute and 41 seconds of the Hogan tape, including about nine seconds of sex, along with a description. Daulerio was asked if a celebrity sex tape with a child would still be newsworthy enough to publish. He said it would be, unless the child was four or younger. He later claimed to be joking and probably was, but that sort of dumb response reflected poorly on Gawker’s professionalism in a way that would embarrass most serious journalists

And yet, Gawker has frequently set out to embarrass serious journalism, or at the very least to critique what the site’s employees view as its pieties. “I think the idea of building up a superstructure of journalism ethics is part of a process of trying to exclude the hoi polloi from the process of reporting and commenting on the news,” John Cook stated in 2013. At the time, Cook was defending his controversial decision to raise funds via crowdsourcing to buy a video of Toronto mayor Rob Ford smoking crack.

In fact, a Gawker whose employees wouldn’t post a Hulk Hogan sex tape is a hard thing to imagine. When Denton, increasingly concerned about suits like Hogan’s, has tried to push back against his editors’ expansive view of what’s “newsworthy,” he’s met staunch resistance. Last year, Gawker Media executive editor Tommy Craggs and the website’s editor-in-chief, Max Read, resigned after Denton took down a story that used a tip from a gay escort to out a Condé Nast executive. Several other employees who supported Craggs and Read took a buyout.

The Hogan case, then, doesn’t pose a threat to the way most media outlets imagine press freedom, but it does challenge Gawker’s expanded view of how journalism should work. It was 126 years ago that prominent Boston attorney Samuel Warren and future U.S. Supreme Court Justice Louis Brandeis first published “The Right to Privacy” in the Harvard Law Review. Because of technological innovations like the portable camera, they argued, a right that was always implicit now needed protection.

“Numerous mechanical devices threaten to make good the prediction that ‘what is whispered in the closet shall be proclaimed from the house-tops,'” they wrote.

Warren and Brandeis argued that the law could and must protect ordinary citizens from full exposure. From the start, Gawker’s approach to news has suggested instead that technological advances have made that sort of protection impossible, that privacy is a privilege that only the wealthy and powerful are afforded – and therefore as much of it should be snatched away as possible. The question the Gawker-Hogan trial raised is one that Gawker has raised consistently: Whether privacy, as we understood it in the 20th century, has ceased to exist. And the jury has answered: “Not yet.”