Gay, lesbian and transgender performers have won Grammys, Oscars and topped the charts, but they will never win American Idol. The singing competition show first broadcast just a year before Massachusetts became the first state with marriage equality, and it finishes its run in the first full year of marriage equality country-wide. The 15 years of Idol‘s tenure are a microcosm of what America wanted to be and wanted from its culture for a decade and a half. But as the word moved forward, Idol stayed trapped in a past it could never really shake.

The thrust of American Idol was always to showcase the best undiscovered American singing talent, but part of the reason  you tuned in was to watch someone stumble. In the early episodes, that was a constructed reality, the handpicking of the very best to juxtapose the very worst of who showed up hoping for stardom. The first audition ever seen on American Idol is someone who Simon Cowell calls “terrible.” It continues with a montage of bad and more bad as they fast-forward through the early stages of auditions that, in later seasons, stretched for weeks and weeks. Idol was mean to its contestants, but when people showed up and made a scene – like a cheese seller named Stephanie Sugarman who knew to ham it up for the TV cameras and get her 15 minutes – the judges seemed unprepared for the talentless fame-seekers. Of course, we only saw an hour worth of footage for 10,000 auditions, and Idol‘s version of out-there in 2002 seems laughable in 2016. In Season 1, they framed people in Seattle as “belonging in the X-Files” by showing a montage of people having piercings in their tongues and belly buttons.

The meanness and the packaging of the outrageous contestants only ramped up as seasons went forward, with Idol realizing that fans would watch early to see the worst, and they stuck around later to hope for the best. Bad auditioners like William Hung became national memes, and now-defunct organizations like Vote for the Worst banded together to push forward the worst or funniest options during the national voting rounds. While American Idol showcased all sorts of contestants, and was happy to call out anyone as bad, there was always a special sort of meanness reserved for auditioners that fell into the queer end of the spectrum. If you showed up in drag, if you lisped, if you were a boy winking at Simon instead of Paula, you were easy fodder for the cameras, but you weren’t going far.

In 15 years, Idol never did, and never will, champion a fully out Idol. Some forget that the series had its first openly gay contestant in Season 1 in Jim Verraros, who only made it as far as the Top 10. When The Advocate found his online journal, where he was public about his sexual orientation, and requested an interview, the show allegedly made Verraros delete the journal. He came out publicly the next year, and commented that Idol had thought his sexual orientation would give an unfair advantage. This was Idol before social media, where they could tightly control the media leaked out about contestants. Any story outside the Idol narrative was verboten. Verraros didn’t last long enough for anyone to test the theory that a gay contestant could have an edge. 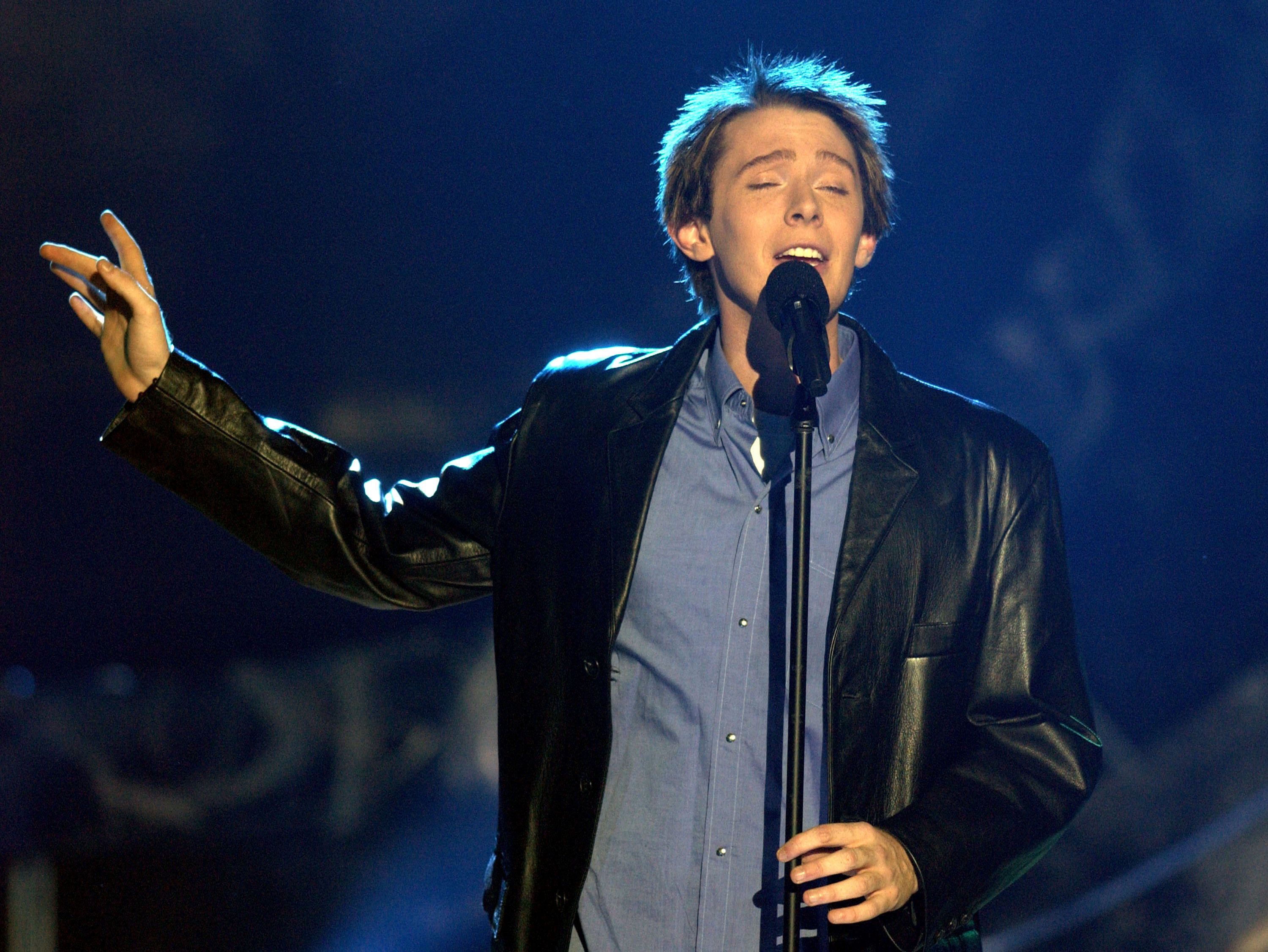 In Season 2, Clay Aiken climbed to the Number Two spot while still in the closet, although his rise was framed as a great singer with a bad look, and he was marketed as the geek-gone-chic once he got his Hollywood makeover. No matter if a performer was still in the closet during their run or not, Idol treated everyone as if their LGBT identity wasn’t part of their package for the show. Idol alums like Darry Noriega, who might be better known as his drag persona Adore Delano, or Frenchie Davis, have lived very public gay lives in the wake of the Idol experiences, but the first time Idol came close to a basically-out winner was Adam Lambert’s Season 8 rise.

Squarely in the middle of Idol‘s tenure, Adam Lambert showed up with a powerhouse voice that Cowell called “theatrical” in his first audition, clearly coded language for “you’re probably too gay for America.” Still, he was undeniably talented, and sailed through the competition with genre-bending performances that became water cooler fodder. Lambert’s run was one of the last must-watch live TV moments in a media landscape that was shifting to streaming and DVR and on-demand. It’s almost incorrect to call Lambert closeted, since he wasn’t in his private life, and when pictures of him kissing an ex-boyfriend surfaced during the season he didn’t deny them or diminish them, but he still never said, “I’m gay,” in a public forum until after the show ended.  The show never seemed to ask him, either, all the while parading newlywed Kris Allen and recently widowed Danny Gokey’s private lives throughout their packages. Idol let Lambert stand on showmanship and talent alone, but in that passed up the opportunity to change what American Idol could be.

Even after Lambert, who opened up the conversation about who the American public might vote for as an Idol, it took the show until 2014 to have an actually out LGBT contestant, MK Nobilette, who made it to the Top 10. In the time from 2009 to 2014, American culture was shifting. The tide in the marriage equality fight had begun to turn, going from three states with equality to 16. plus D.C., with full equality (and five more with civil unions). This was at the same time that Glee, another Fox show, celebrated the differences of a rag-tag group of singers, and the breakout hit that went from a gay teen kiss to a gay teen wedding in only five short seasons. Even still, Idol didn’t let up on diminishing and  teasing the “weirdos,” even those who were so obviously playing along. In 2010, Jason Greene, a performance artist, came in to perform as Katy Perry and flirt with Cowell, and while Idol took it seriously as a WTF moment, instead it highlighted how closed off the competition was to the potential of avant-garde artistry in a culture that was in a shifting musical landscape. The same time they joked about “theatrical weirdos,” Lady Gaga was topping the charts. Idol knew what sold in terms of ratings, but kept falling back on tried-and-true formulas. From Season 7 to Season 11, only straight cisgender white men won American Idol.

The only thing that could shake up Idol was actual competition. In 2011 The Voice hit the airwaves, and it gained traction when Idol seemed stuck in idle. In the first season, they had more out LGBT contestants than Idol had over all its season to that point — and two who made it into the finals as part of the Top Four. The Voice focused on talent, and even when someone didn’t make it through, they weren’t showcased as a joke, but as someone just not ready for the big stage. Idol softened in its own way, especially with the departure of Cowell in 2010, and a rotation of new judges who often focused more on how songs made them feel, or pushed contestants to be more present and aware of the song and lyric choices, not just how they could sound on a vocal. As The Voice found talent in seeking out potential auditioners from local music scenes instead of waiting for an open call, Idol had also turned that route, and had even tried to court visibly queer performers like YouTuber Ryan Cassata, who hit back at Idols’ request for him to audition with a video that called out Fox’s attempt to capitalize on the “popularity” of transgender issues. Cassata tried out for Season 14, but says he was told he was not “contemporary enough” only to have producers reach out and ask him to return for Season 15 because he was not someone who “stick out like a sore thumb.” In the end, no one of the final season was an out LGBTQ contestant, either thanks to failed casting attempts or LGBT singers knowing they didn’t stand a chance.

The final three this year are almost so perfectly cast to represent tropes of Idol — and what the show has delivered us over the years. Who wins might define the Idol legacy. Dalton is maybe the Idol that the show has edged toward every season, but never achieved, from Blake Lewis to Lambert. A boy in eyeliner who cries and talks about his limits and his diagnosis without shame. He might not be the winner, as there’s a great tradition for some of the most interesting Idol options falling just short. La’Porsha, on the other end of the spectrum, represents the Idol ideal, the powerhouse singer and single mother who just needed something like Idol to let her have that chance. In the past, someone like her might have been the shocking fifth place elimination, the Jennifer Hudson of 2016. Now, she can be the next Fantasia, if America keeps voting. Trent, the talented country boy who is non-threatening, the biggest staple of Idol‘s success stories. It’s nothing to diminish his talent, but a win from Trent solidifies that legacy even further. To be fair, a Dalton win also plays into Idol‘s penchant for pretty white boys, just a different sort.

We’ll never get an out gay, lesbian, bisexual or transgender American Idol, but we finally got a much nicer Idol after 15 years. It’s the show’s loss, really. It couldn’t keep up with a culture that’s valued connection and authenticity from its performers, not a produced inspirational storyline. If we gave it a few more years it might have shook off the stigma of its mean origins, but gay idols are just finding other means of getting heard instead of a TV show.