Lara Croft, star of the Tomb Raider franchise that celebrates its 20th anniversary today, has been through a lot of changes. She’s been a pin-up and a feminist icon. She’s been portrayed by a series of real-life women, like Angelina Jolie, Rhona Mitra and glamour model Nell McAndrew. In recent years, the Tomb Raider games – which had been stuck in a creative rut – took a leaf out of the James Bond book and went back in time to Lara’s early days as a 21-year-old amateur adventure, rebooting the franchise and the character.

It was a big risk that led to a hit that spawned a new generation of Lara Croft fans. Both games that star this new, more realistic and relatable Lara – Tomb Raider (2013) and Rise of the Tomb Raider (2015) – have sold immensely well, the the tune of over 10 million units. (This number will keep growing too, Rise of the Tomb Raider was an Xbox One exclusive until this month.) The next installment has yet to be announced, but Rhianna Pratchett, the writer behind this reborn Lara has some interesting ideas for her future.

“I’d love to see a kind of Max Payne 3-aged Lara,” she says, referencing the weary, retired NYPD cop from Rockstar’s hardboiled noir series. “Tough as nails, like Carol from The Walking Dead when she’s in badass mode. When the zombies attack the village and there’s a bit where Carol is just a complete badass through the whole episode and she’s got her hood up and going around stabbing things in the neck. I’d love to see Lara around that kind of age.”

Pratchett has made a name in the world of games, bringing her writing skills to Sony’s PS3 launch title Heavenly Sword, the fantasy comedy Overlord series, Irrational’s blockbuster swan song Bioshock Infinite and parkour platformer Mirror’s Edge. Both Heavenly Sword and Mirror’s Edge established her as a creator of strong female protagonists. She’s busy outside of games too, right now her first feature film Vigilia – about female vigilantes – is in development.

Pratchett can’t confirm that she’ll work on another Lara game, but she remains immersed in the world, having worked on Dark Horse’s Tomb Raider comics, where she can be a little more playful with the character. The Lara in the comics is a little funnier – one storyline line sees her fighting in the London Underground dressed as Elizabeth Bennet from Pride and Prejudice. Pratchett says the comics aren’t exposed to the same “Eye of Sauron” level of scrutiny from Tomb Raider studio Crystal Dynamics.

Pratchett’s dream, though, is to take Lara to the sort of moral grey area that’s typically reserved for a certain type of protagonist (read: male). She doubts Crystal Dynamics would be interested in going there.

“Lara off the rails, more of an antihero, and play with that more,” she says. “Lara as more of an outlaw, walking some dubious moral compass.” She points to Red Dead Redemption 2 and the lack of female characters in the trailer, and she wants to see women get a chance to play the bad guys. Pratchett wants more “female outlaws and female soldiers.” 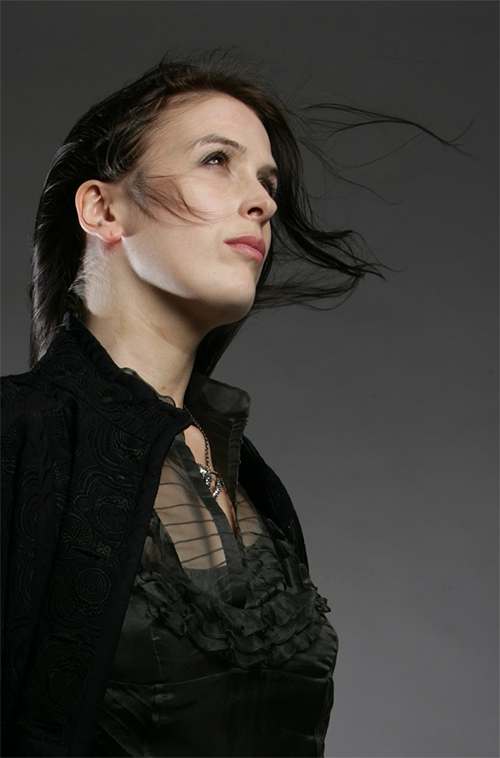 “I was really glad to see Gears of War actually embracing that to a certain extent with Kait, the secondary character. I’d love to a play a game with a character that was like Vasquez from Aliens.”

This would represent a second chance for Lara to grow up. The first Tomb Raider game was released in 1996, in the age of racy men’s magazines and “ladette” culture in the U.K. For every incarnation of the character through the years, there’s been a real-life model assigned to the role, with varying amounts of cleavage on show. Pratchett remembers her own introduction to Lara through her father, the fantasy author Terry Pratchett.

“I remember my dad spoiling the T-Rex moment in Tomb Raider because he was really excited and wanted to tell me about it,” she says.

“I get asked a lot about what it was like playing as a female protagonist, but I was watching things like Aliens and Terminator and I thought ‘that’s nice, games are catching up with everything else.’ It didn’t feel like it was a weird thing because it was already in my sphere of experience.”

She found the marketing a little irritating, like it was pushing her away, but she also recognizes how that helped Lara become the icon she is today.

“I think the Lara in the game and the external Lara, the one that kind of was on the covers of men’s magazines or the one used in advertising and the models. … It felt like a different Lara,” she says. “But arguably, you could say that helped push Lara and Tomb Raider into the public consciousness, as did the Angelina Jolie movies.”

Lara is just about to get another turn at the cineplex, with Ex Machina actress Alicia Vikander set to star. It’s described as an origin story, much like Pratchett’s take on the character, and is due for release in 2018. Norwegian filmmaker Roar Uthaug (The Wave) will direct.

Pratchett hasn’t been asked to consult on the script but is busy with her own projects. For now, she’s happy with her contribution to Lara’s legacy and the changes it may have made to the games you’ll be playing in the next few years.

“There are a lot of thinkpieces about Lara and her depiction and what it meant about female protagonists and what it showed about the ludonarrative dissonance and things like that,” she says, referring to oft-discussed problem of creating sympathetic characters who are then expected to become mass murderers to progress through the game world.

Want video game stories like these delivered straight to your inbox? Sign up now for the Glixel newsletter!