Of all the legacies Jimi Hendrix has left us, one slightly-less-feted is that of his style: his flowing shirts and psychedelic prints have been part of music culture for decades, most recently revisited by rappers like Trinidad James, Wiz Khalifa and Andre 3000. (The latter even plays Hendrix in the 2013 film All Is By My Side.)

But finding the exact-right military jacket or crumpled boot to perfect the Hendrix look always meant a scour at the local thrift — until now. Designer John Varvatos, whose love for rock has greatly influenced his line, has just launched a limited-edition Hendrix capsule collection featuring silken poet shirts, gilded military jackets, and fringed shoulder bags that capture the icon’s essence — easy, wearable flashiness that conveys a sophisticated edge. Especially on point are the leather accessories, which include a “Mojo Pouch Belt” (wear your handbag on your hip!) and the excellent “Hendrix Sharpei Boot,” footwear perfectly crumpled to look as though they’ve been worn in since… 1967.

Rolling Stone spoke with designer John Varvatos at his New York store — the one housed in former punk club CBGB — about the Hendrix collection.

Why do a Hendrix line right now?
First of all, nobody’s ever done anything with Hendrix other than t-shirts, and the family contacted me about doing something special — something that was an elevated product and done right. The clothes are ripe forever, Jimi’s more relevant now than ever for me.

The accessories are especially pitch-perfect. What was the process of refining the designs?
It was very easy. When you have an icon like Jimi to be inspired by and in your mind you lived through all of that and say, what would be worth doing that is representative of that? We’re not trying to imitate exactly what Jimi wore, it’s more, what would he wear in 2014. The accessories were fun because they’re what I dreamed of. I dreamed of Jimi carrying this bag — some sashes we already sold out of, but the shoulder bags. I love this guy [picks up belted hip bag] — I love the whole idea of having a little side bag that I can put my wallet and keys in. Every picture you see of me for the next year, I’ll be wearing this. [Laughs]

I never really thought about doing anything for Jimi until they asked me about it, though. It was never part of the family’s DNA to do these kinds of projects, but the minute we were asked, I was like yes, it’s right up our alley, it’s a natural project. It’s very limited — all the pieces are individually numbered — we wanted it to be very special, very exclusive.

His estate is notoriously tight with his image. Were you surprised when they reached out?
I was more immediately honored, and I knew I wanted to do it very respectfully. He is my number one music icon, and a lot of peoples’, so you know, you don’t want to fuck with that the wrong way. But we’re not trying to be 1960s. Everything is about the fit.

So, important question: what’s your favorite Hendrix song?
Ohhh, there’s so many. “Purple Haze,” “Fire,” of course I love “All Along the Watchtower,” but there are also some not so commercial songs but I mean, everything off of Are You Experienced? It’s my most-listened-to-music. I never get tired of it. We’re listening to it now! 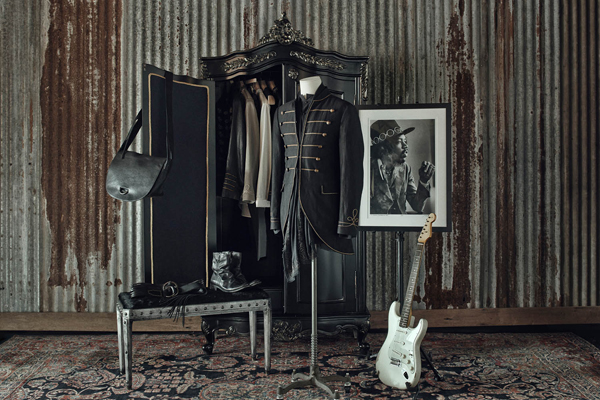