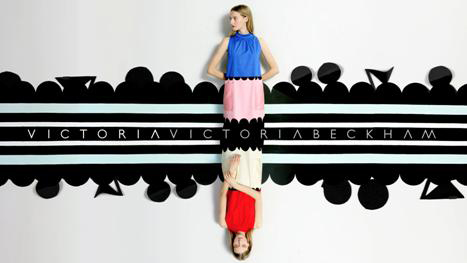 Victoria Beckham’s half-decade fashion empire thrives where many celebrity vanity projects fail: her clothing and accessories perform well at retail, are critically respected and don’t rely on the former Spice Girl-turned-designer’s “Posh” image to generate sales or hype. DVB, Beckham’s line of chicly rendered dresses, mirrors her own sophisticated sensibilities but continue to stand on its own design merits. Not by chance, it’s a label that also thrives on exclusivity, with prices often creeping over the $1,000 mark and, in one extraordinary case, skyrocketing to a whopping $29,000 for a super luxe handbag. But as her public and domestic image trends back down to earth, Beckham has created a place for accessibility within her empire, launching a new line, Victoria.

Described as both “a seamless progression” from her main line and “NOT a second line,” Victoria’s initial styling and marketing cues seem comparable to those of the fiercely loved British label Luella. That bodes well for a new market. Though Luella is currently on hiatus, its “cute but strange” aesthetic remains relevant, peppering the wardrobes of quirky fashion plates the world over, including M.I.A. To promote the launch of Victoria, Beckham hired 27-year-old director Quentin Jones to capture the brand’s quirky vibrancy on film.

The result, which you can see below, is indeed both cute and strange, and also brimming with classic music video motifs: cats, neon prismatic and mirror effects, and retro pop art direction. And, of course, some cunning little dresses. Fans of Beyonce’s “Countdown” video may find something they like here – maybe even to wear.