Tom Wolfe, the brilliant, zeitgeist-channeling journalist and novelist who could absorb fascinating subcultures within American life and transform them into electric prose, died Monday in a New York hospital. He was 88.

His agent, Lynn Nesbit, confirmed the author’s death to the New York Times, adding that he had been hospitalized with an unspecified infection.

Starting off as a reporter in the late 1950s, Wolfe quickly developed a nonfiction style that borrowed from the tenets of literature, delivering dynamic, character-driven pieces that would help give birth to a movement known as New Journalism. Whether profiling One Flew Over the Cuckoo’s Nest author Ken Kesey and his hippie pals the Merry Pranksters or America’s first astronauts, Wolfe had a dramatist’s gift for the telling detail and for crafting page-turning suspense. Inventing household phrases like “the Me Decade” and “the Right Stuff,” he eventually set his sights on a novel, using his journalistic talents to produce a deeply researched and utterly absorbing portrait of 1980s New York with the blockbuster 1987 book The Bonfire of the Vanities. His very presence was as striking as his writing, always appearing in public in his snazzy white three-piece suits and sporting an aristocratic manner that made him as memorable as the colorful individuals he chronicled. “Never try to fit in; it’s sheer folly,” he once advised. “Be an odd, eccentric character. People will volunteer information to you.”

Born in March 1931, Thomas Kennerly Wolfe Jr. grew up in Richmond, Virginia, holding onto his genteel Southern accent all his life. Attending Washington and Lee University, he studied English literature – there was no writing major – and edited the school newspaper’s sports section, along the way co-founding the college’s literary magazine Shenandoah. After receiving his doctorate at Yale, he worked as a reporter in Springfield, Massachusetts before moving to The Washington Post and then landing at the New York Herald Tribune, whose brash reporting style was summed up by its motto: “Who says a good newspaper has to be dull?” While there, he wrote for the paper’s Sunday magazine, which would later become New York magazine, an upstart rival to the more refined New Yorker.

But Wolfe’s first major breakthrough came in 1963 with a piece he pitched Esquire about Southern California’s world of custom cars. After doing the reporting, though, he panicked about how to write the piece. On the advice of his editor, he sent over his typed-up notes, and the vivid, stream-of-consciousness observations became “There Goes (Varoom! Varoom!) That Kandy-Kolored Tangerine-Flake Streamline Baby,” one of the landmark documents in the formation of New Journalism — a flashy, giddy prose style whose champions, including idiosyncratic writers like Hunter S. Thompson, were charting the country’s changing, turbulent mood during the Sixties.

The techniques Wolfe brought to “Kandy-Kolored” – you-are-there portraiture, inspired digressions, obscene amounts of exclamation marks and italics – would be his trademarks in subsequent works, perhaps most memorably in his 1968 nonfiction book The Electric Kool-Aid Acid Test, which didn’t just profile Kesey but also the LSD counterculture at large. (Wolfe himself didn’t partake in the hallucinogen. “I felt it was really far too dangerous to take a chance,” he said in 2016, “and they didn’t try to pressure me.”) 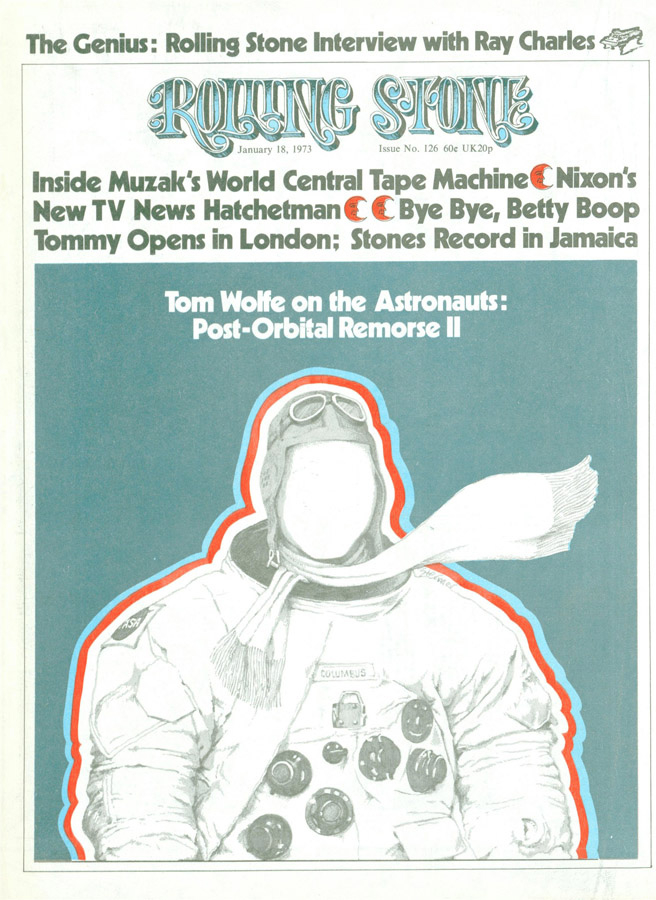 Wolfe always dove into unique ecosystems in order to present a macro view of American life. 1979’s The Right Stuff, which started as a series of pieces in Rolling Stone about the Mercury Seven astronauts, became a commentary on the country’s can-do spirit and the breadth of its ambition. No matter the topic, Wolfe learned quickly that trying to blend in with his subjects actually hurt his reporting — pretending to know more than he did kept him from learning the basics of the worlds he was embedded in.

“People really don’t want you to try to fit in,” he said in a 1980 interview with Rolling Stone. “They’d much rather fill you in. People like to have someone to tell their stories to. So if you’re willing to be the village information gatherer, they’ll often just pile material on you. My one contribution to the discipline of psychology is my theory of information compulsion. Part of the nature of the human beast is a feeling of scoring a few status points by telling other people things they don’t know. So this does work in your favor.”

In that same interview, he mentioned that he was considering writing his first novel. “I’m doing something that I’ve had on my mind for a long time, which is a Vanity Fair book about New York, à la Thackeray,” he offered, later adding,            “[N]ovelists themselves hardly touch the city. How they can pass up the city, I don’t know. The city was a central — character is not a very good way to put it, but it was certainly a dominant theme — in the works of Dickens, Zola, Thackeray, Balzac. So many talented writers now duck the city as a subject. And this is one of the most remarkable periods of the cities.” 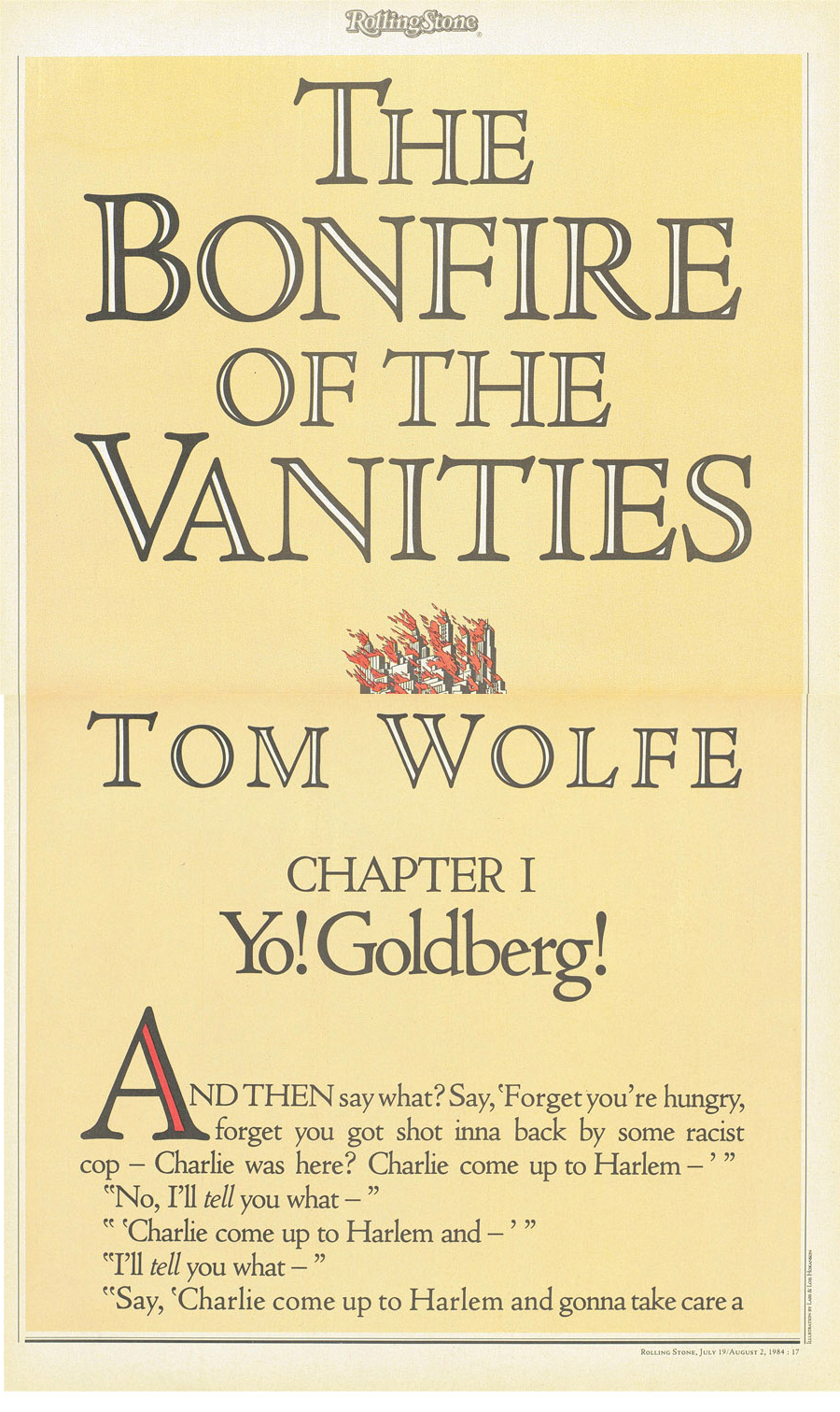 After years of research and reporting, Wolfe achieved his lofty goal by publishing The Bonfire of the Vanities, an epic, swaggering tome that began as installments in Rolling Stone. The book introduced the world to Sherman McCoy, a wealthy and morally corrupt bond trader who, in another lively Wolfe turn of phrase, was a “Master of the Universe” during Wall Street’s giddy Eighties boom. Receiving glowing reviews and enjoying phenomenal sales, The Bonfire of the Vanities tackled not just New York but also racism, masculinity, economic inequality, a broken justice system and the tabloid press — all the while being wickedly funny and unexpectedly moving. It was quintessential Wolfe: knee-deep in the messy vibrancy of American life but sharply insightful about the country’s contradictions and shortcomings.

“When I was writing that book, it was with a spirit of wonderment,” he confessed later. “I was saying [excitedly], ‘Look at these people! Look at what they’re doing! Look at that one! Look at that one!’ It was only after I finished and read it over that I see that there is a cumulative effect that leads to [a dark reading of the book].”

Wolfe continued to write in subsequent decades, earning good reviews and more terrific sales for his 1998 follow-up novel, the National Book Award-nominated A Man in Full. (This time, the rich setting was Atlanta.) But he never again quite captured the pulse of the times as seismically as he had with his previous work. Along the way, he also accumulated famous detractors, such as novelists John Updike, Norman Mailer and John Irving, who accused The Bonfire of the Vanities of being a bastardization of the novelistic form. In his inimitable, strutting, flamboyant style, Wolfe responded by writing a mocking piece called “My Three Stooges,” criticizing them for failing to do any research for their own recent books, which left their work feeling sterile. “The American novel is dying,” he declared, “not of obsolescence, but of anorexia. … It needs novelists with huge appetites and mighty, un-slaked thirsts for … America … as she is right now.”

Wolfe’s reputation also took a hit after he loudly supported George W. Bush, saying in 2004, “You are considered twisted and retarded if you support Bush in this election. I have never come across a candidate who is so reviled. Reagan was sniggered at, but this is personal, real hatred. … I would vote for Bush if for no other reason than to be at the airport waving off all the people who say they are going to London if he wins again. Someone has got to stay behind.”

And yet, his impact as a chronicler of cultural shifts remains untarnished. (Just one example: It was Wolfe who first mentioned a burgeoning musical form known as hip-hop to original Rolling Stone publisher Jann Wenner.) And beyond being kaleidoscopically vibrant, Wolfe’s volcanic prose inspired other writers to set aside formality in order to find their own voices and get at the truth of their subjects.

“Many people are excellent letter writers,” Wolfe explained in 1975. “But the same persons tend to freeze when writing for publication. We censor out our emotions and best phrases so as not to reveal too much of ourselves. I simply learned not to censor out the things that run through my mind as I write.”