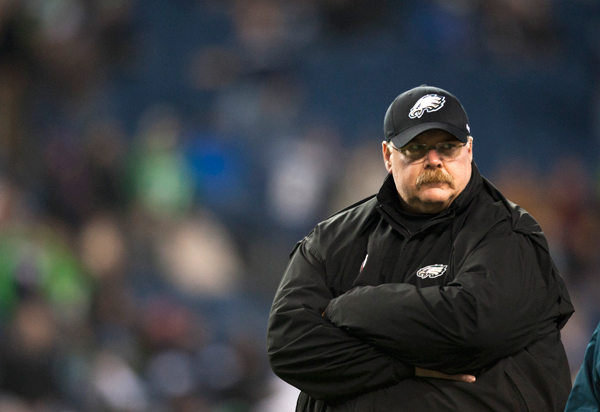 The 2011 NFL season will be remembered for many things: the Packers’ run at perfection, the Drew Brees-Aaron Rodgers-Tom Brady three-headed assault on Dan Marino’s passing record, Tim Tebow and the Divine-Intervention Broncos.

But what Gridiron Posterity should really remember about this year is how extraordinarily bad the coaching has been. By the time the dust settles on 2011, we’ll likely have seen more head coaches fired for more horrifyingly inexcusable, genuinely game-losing last-minute brain farts than have ever been seen in NFL history.

Three head coaches have already been canned this year, and at least half a dozen more have put themselves on the hot seat with surreal end-of-game decision-blowing episodes, and the weird thing is that not all of them have been overwhelmed sideline rookies: Several NFL veterans, and even one or two coaches with Hall of Fame résumés, have flunked tests that nine out of 10 loudmouth drunks in Starter jerseys at your local Buffalo Wild Wings would have passed with ease.

The job of an NFL head coach is a unique executive position in the American business landscape. The person running an NFL team is expected at once to be a PR-friendly face of a billion-dollar company, a master of a kind of geeky game theory that’s understood only by a small tribe of overgrown adolescents, and an inspirational battlefield general who must play a variety of roles, from social worker to father figure to parole officer, for a small army of oversexed millionaires.

On top of all that, though, the head coaching job is a starring role on America’s highest-rated TV programs. Even the coaches who are ex-players and used to the bright lights suddenly notice that audiences are grading them not for their athleticism but for their brains – and this realization can cause even the most savvy ex-jocks to freeze like a four-year-old at his first school play.

This year’s most celebrated example of that phenomenon is obviously the Cowboys’ Jason Garrett, who will almost surely be more remembered as the first coach in NFL history to ice his own kicker, in the Cowboys’ crushing midseason loss to the immortal Kevin Kolb and his Arizona Cardinals.

But Garrett wasn’t alone. A parade of experienced head coaches helped build the Tebow legend with similar late-game freeze-ups. Miami’s Tony Sparano started things by inexplicably going for two up two scores early in the fourth quarter against Tebow. Afterward, Sparano flaunted his grasp of basic mathematics by claiming that “I mean, you go up 15 points in the game, it turns it into a three-score game, really.”

The Jets’ Rex Ryan followed up Sparano’s incredible gaffe by calling an all-out blitz near his own 20-yard line (every drunken Jets fan in America screamed, “Noooo!”) that allowed Tebow to scamper for a game-winning touchdown. But the worst in the Tebow series was San Diego’s Norv Turner, surely the most clueless and uninspiring figure ever to be given three head coaching jobs, a man who stands on the sidelines every Sunday wearing the hopelessly defeated expression of a husband being shown videos of his wife walking into a motel with her personal trainer.

Armed with one of the best QBs of the generation (albeit having a lousy year), Turner in overtime against the Broncos instead put the game in the hands of his worst unit, his offensive line, calling three straight runs to set up a long field-goal try that the entire country knew was going to be a miss. Denver won on the next possession.

There have been lots of other unaccountable decisions. Philadelphia’s increasingly rotund and dazed-looking Andy Reid, down two touchdowns, punted from Buffalo’s 37 on a fourth-and-four, without a doubt the pants-wetting wuss-bunny move of the year. Then he continued his bizarre history of poor clock management by cheating himself out of a first-half field goal against the Bills.

It’s hard to pinpoint why there are so many errors now – it could be we’re just noticing them more. Certainly, rule changes have turned the game into Eighties NBA-style fast-break basketball, magnifying even the smallest clock-management mistakes. Offensive holding is basically legal (the standard seems to be that there’s no flag unless even Dan Dierdorf can see the hold), and the wide receivers are all nine-foot mutants whom you can’t breathe on without getting a penalty – so if you’re up six with a minute left and you punt it deep in today’s NFL, even John Skelton or Tim Tebow instantly rips downfield to break your heart.

It wasn’t like that 25 years ago, when the safe end-game play was to kick it deep and let Bobby Hebert or Tony Eason try to complete five passes in a row with Dexter Manley punching him in the spleen; if you muffed a timeout, no big deal. But nowadays the worst offensive players run around as free as puppy-bowl contestants, and 40 lost seconds more often than not loses you the game. In other words, teams simply can’t survive Norv Turner coaching anymore. You need to think down to the second, like NBA coaches.

Or maybe there’s just something in the air this year, and God knows what it is. But bet on this: There will be a lot of new hires before 2012.