Last year in Rolling Stone we called 2014 “the biggest year in transgender history,” citing landmark legal victories, as well as an unprecedented level of visibility in television, music, film and fashion. This year should have been bigger. It was, after all, the year of Caitlyn Jenner, who singlehandedly turned “transgender” into a household term overnight. But as with any civil rights movement, backlash is an inevitable consequence of progress. This year has seen an unprecedented level of violence against transgender people, with 21 reported homicides so far. It was a year of painful contrasts and uneven gains.

So this year we’ve selected the five best and five worst trans moments of 2015, in an attempt to capture the ambivalence that many trans folks feel about being under the cultural spotlight with little in the way of protections.

Laverne Cox on 'OITNB' and Representing the Trans Community

The good: Progress toward transgender inclusion in the military.
Some 15,000 transgender people are already serving in the military, even if they cannot do so openly. The ban on trans inclusion will likely remain in place into 2016 but, given all the progress that took place in 2015, it can’t last much longer. In February, President Obama and Secretary of Defense Ash Carter announced their support for open transgender military service. And, in case there was any doubt that transgender people can be capable soldiers, the American Medical Association concluded in June that “[t]here is no medically valid reason to exclude transgender individuals from service.“

The Pentagon fell in line the next month, essentially ending the practice of discharging or denying re-enlistment to transgender troops. As of December, the ban on enlistment technically remains in place and transgender veterans still struggle to access appropriate health care, but this year will be remembered as the tipping point for transgender troops.

The bad: Houston’s non-discrimination act (HERO) is voted down.
In 2009, Houston made history by becoming the largest U.S. city to elect an openly lesbian mayor, Annise Parker. In 2015, it made history again by becoming the most populous city in the U.S. without LGBT legal protections. The Houston Equal Rights Ordinance (HERO) was a sweeping piece of nondiscrimination legislation pertaining to employment and public accommodations that covered a wide range of characteristics including sex, race, ethnicity, disability, sexual orientation, gender identity and pregnancy. The city council approved it in 2014, but the Texas Supreme Court forced the city to put it up to a popular vote this November.

The proposition’s opponents, including local pastors and former Houston Astros player Lance Berkman, turned the HERO debate into an ugly anti-transgender smear campaign, claiming that the bill “would allow troubled men who claim to be women to enter women’s bathrooms, showers, and locker rooms.” The bill failed 61-39 percent, proving that the myth of the transgender bathroom predator is still effective, despite a complete lack of evidence to back it up.

The good: Caitlyn Jenner’s Diane Sawyer interview.
It’s difficult to overstate the importance of Diane Sawyer’s groundbreaking sitdown with Caitlyn Jenner. Known to millions of Americans as a gold medal Olympian and the face of Wheaties, Jenner’s Eighties icon status gave trans issues an unprecedented limelight in the media. After months of speculation, Jenner announced what many had anticipated: “I’m a woman.”

“I am going to change the world,” she declared. “My whole life has been getting me ready for this.”

Caitlyn Jenner hasn’t done so yet, but it’s not for a lack of trying. The interview broke viewership records for 20/20, boasting 16.9 million viewers, and her July Vanity Fair cover put her coming out on every newsstand in America.

Caitlyn Jenner also celebrated a hallmark year by winning the Arthur Ashe Courage Award at the ESPYs, while Glamour named Jenner one of its “women of the year.” That’s putting it lightly: 2015 was the year of Caitlyn Jenner. 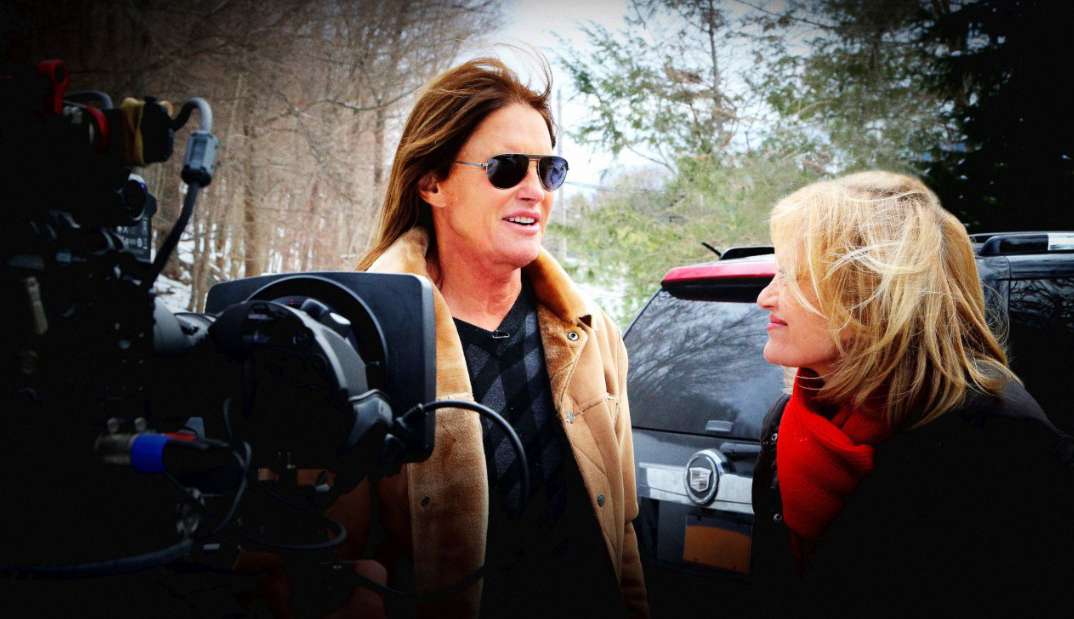 All of these costumes breathed new life into the damaging misperception that transgender women are “men in dresses.” Spirit tried to defend the costume, calling Jenner “the most important real-life superhero of the year” and claiming that it “celebrates her.” Jenner told Matt Lauer she thought it was “great” and not offensive “at all,” but her take on the topic almost didn’t matter. To the extent that Jenner became a stand-in for all transgender women in the public imagination, the costume encouraged people to see trans identity as a costume rather than a reality.

The good: The White House names its first trans staffer in response to criticism.
Three years ago, Vice President Joe Biden called discrimination against trans people the “civil rights issue of our time.” But while the nation’s highest offices had recognized the plight of transgender Americans, the White House had yet to actually hire a trans employee until this year. In August, Raffi Freedman-Gurspan, who previously worked for the National Center for Transgender Equality, became the director of outreach and recruitment for the West Wing’s personnel office. A statement from the White House argued that her story is central to the administration’s principles of diversity, inclusion and justice. “Her commitment to bettering the lives of transgender Americans, particularly transgender people of color and those in poverty, reflects the values of this administration,” Valerie Jarrett, a senior adviser at the White House, said.

Hiring a trans woman of color was an important move after President Obama controversially shut down a trans activist in June. Unfairly labeled a “heckler” in media reports, the activist, Jennicet Gutiérrez, was protesting the administration’s immigration policies. Two months after the incident, the appointment of Freedman-Gurspan, an adoptee from Honduras, was an indication that Gutierrez’s concerns were finally being heard.

The bad: Republicans voice opposition to trans rights.
Pick a Republican presidential candidate, and there’s a good chances they said something boneheaded and bigoted about transgender people this year.

Former Arkansas Gov. Mike Huckabee said he wished he could have passed himself off as trans in high school so he could “shower with the girls.” Ben Carson called for the creation of a “transgender bathroom” because “it is not fair for them to make everybody else uncomfortable.” Donald Trump made a bizarre joke about the genitals of a transgender beauty pageant contestant, while New Jersey Gov. Chris Christie laughed about vetoing a transgender birth certificate law on talk radio. Meanwhile, Texas Sen. Ted Cruz claimed the federal government is “trying to force [schools] to let boys shower with little girls.”

These aren’t just outrageous things to say. They are prominent examples of the irresponsible rhetoric that fuels transphobic policies, and in a year in which statements exactly like these led to the repeal of historic gains for trans Americans, they cannot be tolerated.

The good: Transparent and Laverne Cox show how far trans representation has come.
Last year marked a watershed moment for trans representation on TV: Actress Laverne Cox broke the glass ceiling for trans actors at the Emmys, receiving a historic nod for her work on Orange Is the New Black. That show celebrated its third season on Netflix in 2015, while Cox continued to break out on both film and television. She had a well-received supporting role in the acclaimed Lily Tomlin comedy Grandma, and was cast as a transgender lawyer in CBS’s upcoming Doubt; that will make her the first transgender person to star in a network TV show.

In addition, Amazon’s groundbreaking family dramedy Transparent won five Emmys, including Best Actor for Jeffrey Tambor. That award made Tambor the first individual to win an Emmy for playing a trans character on TV, but the even bigger win was the veteran actor’s speech. A year after Jared Leto was widely criticized for ignoring trans issues while accepting an Oscar for Dallas Buyers Club, Jeffrey Tambor — who plays Maura, a late-life transitioner beginning to come out to her family — dedicated his award to the transgender community. “Thank you for letting us be part of the change,” he said. 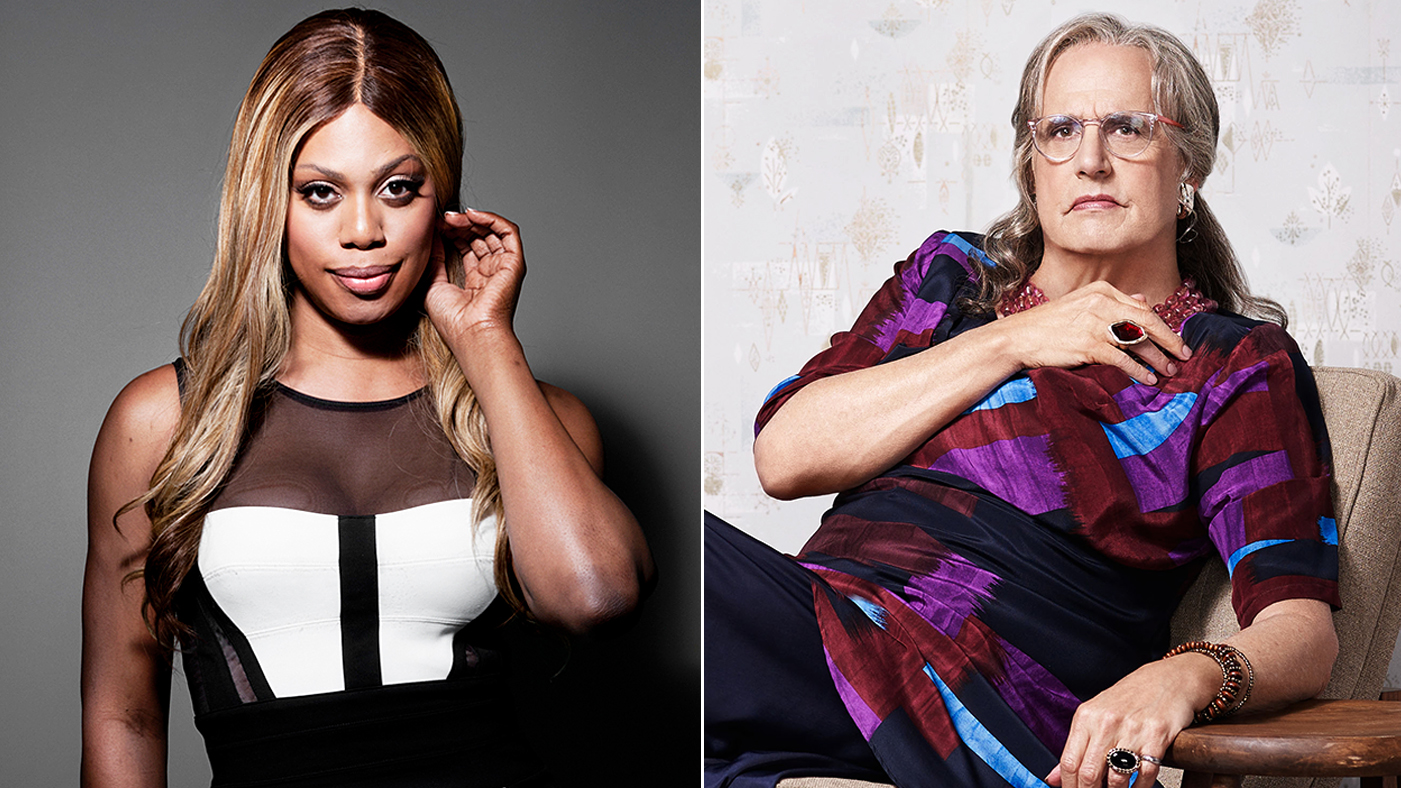 The bad: The Michelle Rodriguez-Tomboy controversy showed how far we have to go.
But when it came to trans representation in the entertainment industry, 2015 also indicated that Hollywood still lacks crucial education and understanding of trans issues. In October, GLAAD criticized the upcoming Michelle Rodriguez thriller, Tomboy, A Revenger’s Tale, for its “sensationalistic” depiction of transgender issues. The film is about a hitman kidnapped by an evil surgeon (Sigourney Weaver), who forces him to undergo gender-reassignment surgery. Directed by Walter Hill, the film is due in theaters in 2017.

But Rodriguez’s disappointing response was actually even worse than the movie’s more than problematic logline. The Fast & Furious actress misgendered Caitlyn Jenner, while also getting her name wrong: “Thank Kris Jenner for becoming who he became.”

The good: More millennials are accepting of trans people than ever.
If Hollywood is slowly becoming more accepting of trans issues, young people are following suit. When it comes to transgender and non-binary people, numerous surveys have shown millennials to be the most tolerant generation in history. In February, a Fusion poll found that 50 percent of millennials consider gender to be a “spectrum,” believing that “some people fall outside conventional categories.” Meanwhile, statistics from the Public Religion Research Institute showed that a record number of millennials — 7 percent — identify as LGBT, three points higher than the overall population.

A number of success stories spotlight millennials’ inspiring acceptance of their trans peers. This year, Denair, California, senior Anry Fuentes became the first openly transgender cheerleader in her high school’s history, while 17-year-old Landon Patterson was named Missouri’s first trans homecoming queen. Patterson stressed that while making history is great, it’s the support of her community that matters most. “To have my students and friends vote for me just really makes me feel welcomed and loved for who I am,” she told Fox’s Kansas City affiliate.

The bad: The trans murder rate is also at an all-time high.
There have been 21 reported murders of transgender people in the U.S. so far this year, the highest that figure has ever been. Most of the victims were young transgender women of color. They were shot, stabbed, burned, beaten and run over. As if their violent deaths weren’t tragic enough, local media outlets frequently misreport and sensationalize these murders, using incorrect pronouns and previous names to describe the victims. Their suspected killers, often boyfriends or other men who had relationships with them, can still claim in every state but California — where the “trans panic” defense was banned last year — that their actions were the the result of discovering the gender identity of their partner. Their loved ones were left heartbroken and looking for answers. Said one friend of murdered transgender teen Mercedes Williamson, who was found buried near the home of her alleged killer’s father, “I want to know why you did it. I want to know why you took her. Why?”

Whatever progress has been made in 2015, it is marred by the fact that too many transgender women of color are not alive to see it, and that it will take years for those who survive to feel its effects.