A little over a year ago, a mentally ill Dallas-area man named James Lance Boulware, angry over losing custody of his son, bought an armored van on eBay, marketed as a “Zombie Apocalypse Assault Vehicle.” The van had gun ports under each of its blacked-out windows. Just after midnight one Saturday morning, with a few homemade pipe bombs and a semi-automatic rifle in-hand, he drove the van to the headquarters of the Dallas Police Department and started firing at squad cars. Many hours later, the cops, with the aid of specialized weaponry, disabled the van and killed Boulware, spending much of the day dealing with the explosive devices he left behind.

One of the strangest things about Boulware’s bizarre and brief reign of terror in Dallas is how little attention it warranted by that Monday. Having happened in the wee hours of the weekend, it fell into a news hole. And Boulware’s failure to successfully shoot any of the police he targeted made it easier for people to shrug it off. Something about the situation, as surreal an event as you could imagine happening in an American city, had become normalized, unworthy of sustained general interest just two days later.

Sick of Police Shootings? America Asked for Them

We’ve all become accustomed to mass shootings, but Boulware’s specific anti-police plot wasn’t even particularly unusual in Texas: Some eight months earlier, an anti-government crank named Larry McQuilliam went on a shooting spree in downtown Austin. After firing a hundred rounds into government buildings and the headquarters of the Austin Police Department, and a botched attempt to set the Mexican Consulate on fire, he was dispatched by one cop’s lucky shot before he could hurt anyone.

And in 2010, another loner named Patrick Sharp attempted to set off an ammonium nitrate bomb in front of the headquarters of the McKinney Police Department, north of Dallas. The bomb failed to detonate, but he then fired 163 shots at responding officers before he was killed.

All commentary to the contrary notwithstanding, there is nothing particularly surprising about Thursday’s attack in Dallas. It was inevitable. Eventually, someone was going to get it “right.” Micah Xavier Johnson, thanks to his military training, knew what he was doing, targeting and dispatching police officers with ruthless efficiency. Footage from the attack showing Johnson weaving in and out of pillars and shooting one officer from behind is a brutal testament to what powerful weaponry in skilled hands can do in the right environment, against even well-trained and armed opponents. It was also, in its own way, a powerful rebuke to the strange logic that governs gun politics, and gun culture, in Texas.

The modern mass shooting was born three hours south of downtown Dallas, at the University of Texas in Austin, in 1966. Another veteran, an ex-Marine sharpshooter named Charles Whitman, climbed the university tower and started picking off students. Whitman, like Johnson, benefited from being a hell of a lot better with a gun than his opponents, and had significant tactical advantages — in Whitman’s case height, and in Johnson’s chaos and the presence of crowds.

In 1966, a lot of Texans owned guns — most often bolt-action hunting rifles, of limited martial utility. The police, short of arms themselves, couldn’t figure out what to do about Whitman. So civilians grabbed their guns and started taking potshots at the tower. For gun enthusiasts, that part of the Whitman story — the defense of the UT campus by an ad-hoc citizen militia — has become a legend in its own right. Some say the random fire helped keep Whitman pinned down, and the body count with it. But the chaos came at a cost — it kept Whitman’s victims, like Claire Wilson, the pregnant 18-year-old who was Whitman’s first target, from getting help earlier than they could have.

In the intervening decades, violent crime has plummeted around the country: Most Americans are less likely than ever before in their lives to be a victim of any kind. But guns, and the cult of self-defense, play a more prominent role in American life than ever before. As the intense psychodrama and horror of the mass shooting has become more and more embedded into American skulls, more people look to guns as a shield. For them, guns represent life, not death. Carrying a gun gives the bearer an immense feeling of power and privilege, a feeling of agency. When the end comes for me, the feeling goes, I’ll be ready.

Last year, the Texas legislature expanded gun rights in Texas in two significant ways: legalizing the carry of handguns openly in public places, where before only concealed handguns were permitted, and legalizing the carry of concealed handguns on college campuses. Much of the justification for expanding these rights has been the idea that more guns in more places will mean more chances to stop shooters like Micah Johnson. During hearings for the two bills, lawmakers told and retold the story of the men who shot at Whitman — while, uncomfortably, Wilson repeatedly retold her story of bleeding out during the ensuing chaos.

But the most significant change taking place in the state isn’t in the law — it becomes harder to logically justify minor restrictions on handguns when guns are already everywhere — but in the culture. The increasing visibility of high-powered firearms, and state governments’ embrace of the ad-hoc militia principle, bodes ill for everyone, and not just because research shows more guns equals more gun deaths — accidents, suicides, murders — but also because the events in Dallas show some of the risks of that cultural shift.

First, take Mark Hughes. Dallas police erroneously made Hughes, briefly, the most wanted man in the country, but the open carry of long guns, like AR-15s, is legal in Texas — and it always has been. But that didn’t used to be a right people exercised much. Not too long ago, were you to march up and down a Texas street carrying military-grade weaponry, you would have been considered mentally aberrant. 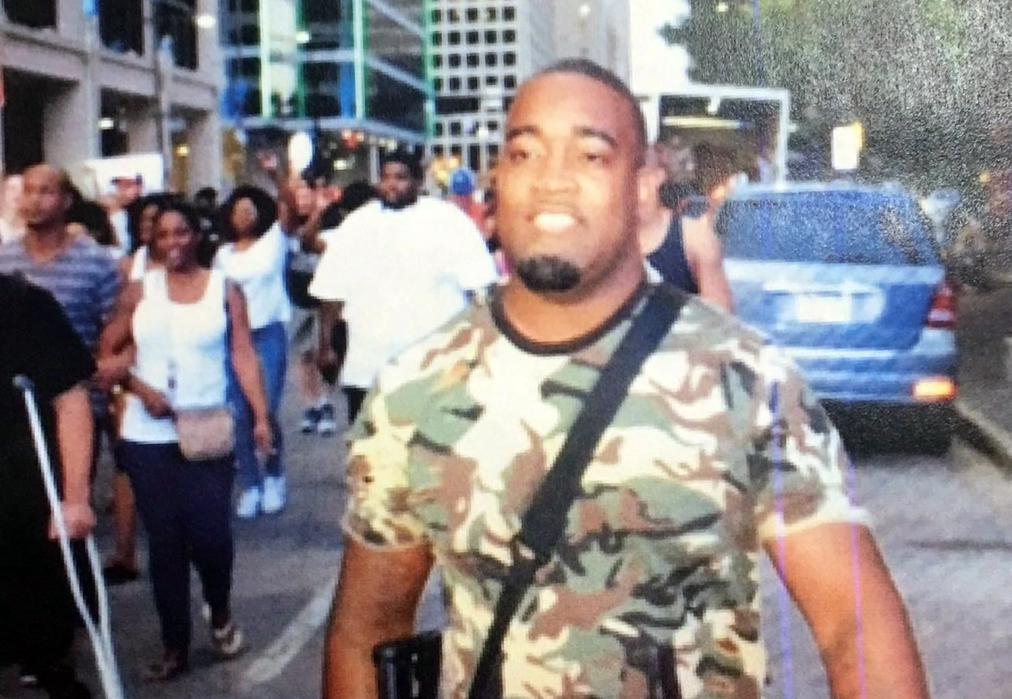 That, too, has been slowly normalized. So-called “open-carry demonstrations” have become a fairly routine part of civic life in Texas: People, mostly young men, materialize in public places with long guns over their shoulders, usually unloaded, to flex their “rights.” Mostly they revel in the feeling of power and attention it gives them, but the presence of guns is never a value-neutral proposition: They’re sometimes used to intimidate. On several occasions, open-carry groups have showed up just outside the meeting places of gun-control advocates — just to hang out, they say. And when a Black Lives Matter group marched in Dallas in 2014, a small group of open-carry guys showed up with rifles to chaperone them, then later told conservative outlets they had prevented a riot.

So when shots rang out on Thursday, the Dallas Police Department, in the panicked scramble to find the shooter, had more false positives to eliminate. Though they erred in calling Hughes a “suspect” on Twitter — he’s lucky to be alive after that — the presence of any visible weapons at the march clearly added to confusion in the shooting’s aftermath. Open-carry protestors often show up where many people are: At political conventions, rallies and festivals, like South by Southwest. Gun enthusiasts often talk about the dangers of “gun-free zones,” but Johnson shows that for the smart mass shooter, civilians carrying guns can serve as decoys.

But what about the ability of carried weapons, when loaded, to protect? Speaking of gun-free zones: Johnson, of course, could not have picked a more heavily armed part of Dallas to start shooting. There was a thick concentration of police officers downtown already due to the march, and Dallas’ police HQ was just a few blocks away. The officers hunting him down in the initial phase weren’t civilian hobbyists — they were trained to do this. Many were vets, like Johnson. And he was still spectacularly successful.

On August 1st, on the 50th anniversary of the UT Tower shooting, it will become legal for licensed permit holders to carry handguns on the campus of state schools in Texas. The new law was sold heavily on the idea that students with guns could help prevent something like the Virginia Tech shooting, or the massacre at Umpqua Community Collage, or the killings at the University of California at San Bernadino. Last year, an open-carry group held a “mock mass shooting” at UT, complete with fake blood, to advertise that idea.

The idea that some teens who have taken a four-hour class could stop a sophisticated attack was always a pretty ludicrous proposition, but it seems even stupider after Thursday. We’ve collectively decided not to curb ownership of the chosen weapons of mass shooters. We’re putting guns in more places, and letting more people flash them, with the idea that guns can cancel each other out, like a subtraction problem: bad guy with gun + good guy with gun = no problem.

But of course, a handgun is not equivalent to a high-powered rifle in the hands of someone truly skilled, and it can never be. College students with handguns could not have stopped Whitman, nor would they have stopped Johnson.

Will Thursday’s bloodletting cause Texans to hit pause on our collective project? Probably not. As Gary Wills wrote after Sandy Hook, for the devoted, guns cannot fail, they can only be failed: by people who don’t carry enough of them, by the politicians who set the rules, by the fearful public. There is nothing wrong with guns that cannot be fixed by what is right by guns, etc., etc. It is a safe bet that the state legislature, next year, will be looking at new ways to make firearms more visible — probably, as they did last year, over the objections of the police officers they now so fervently laud.

Where Boulware, McQuilliam and Sharp failed spectacularly, Johnson succeeded beyond his wildest dreams, blazing a path for the next shooter. So, open carriers, enjoy your Glock; they’re fun to shoot. And enjoy the sense of power you get from toting your AR around downtown. But when the bad man comes — if he comes for you, and he comes correct — your guns will not save you.