On Monday evening, students cramming at Bird Library at Syracuse University, a private university in upstate New York, received a strange and terrifying file via Airdrop. The file, which was also posted on a forum for Greek life on campus, contained the violently anti-Islamic manifesto of the Christchurch shooter, who massacred more than 50 worshippers at a mosque in New Zealand earlier this year. “We must secure the existence of our people and a future for white children,” the message attached to the manifesto said.

The posting of the white supremacist manifesto came at the tail end of a number of what students and faculty have described as a tense and frightening time, following a slew of racist and anti-Semitic incidents on campus, including a swastika being drawn in the snow, racist graffiti drawn on campus buildings, and members of a campus fraternity yelling racial slurs at a female student of color. Though federal and state law enforcement officials have been called in to investigate, classes have not been suspended, and officials have released little information about any potential suspects.

“Perhaps the biggest reason this string of incidents is so scary is because there’s so many unknowns,” says Sam Gelfand, a 22-year-old SU sophomore. “[We] don’t know if it’s one person, several people, if it’s a group, if it’s white supremacists, if it’s a horrible attempt at a joke, if it’s someone trying to get finals cancelled…I could go on and on. We don’t know who, or what, we’re up against.”

For the past few days, campus activists have sharply criticized what they claim is the administration’s ineffectual response to the harassment on campus; they have also prompted a student-led sit-in movement, which has been occupying the campus’s Barnes Center, the university’s new student-wellness center, for almost a week. Many students have said they are too afraid to leave their homes, prompting many faculty members to cancel classes in solidarity. “Tensions are really high,” says one 21-year-old student of color, who asked to stay anonymous for fear of reprisal from the administration or harassment from white supremacists nationwide. “They want us to go to class and perform at our highest, but I couldn’t imagine sitting inside a lecture hall knowing I could be harmed at any moment. People are scared.”

Yet SU faculty members and students of color, most of whom spoke on the condition of anonymity, say that the events of the past few weeks are far from isolated incidents. For many students of color on campus, the events of the past few weeks — compounded with what they see as an inadequate response from the administration — feel very much like history repeating itself. Racism on campus “is not a new thing,” says Dr. Jenn Jackson, an assistant professor of political science at SU, who has vocalized her support for the student activists on social media. “[And] these issues that are arising, I think the administration would do well to consider these not incidents or random events but systemic patterns on campus.”

According to a timeline released by NotAgainSU, the incidents on the Syracuse University campus began on November 7th, when racist graffiti targeting Asian and black students appeared in the bathrooms of Day Hall, a freshman dorm on campus; the bathrooms also appeared to have been vandalized. According to the black student publication Renegade Magazine, the chief of the Department of Public Safety (DPS) and other SU administrators held a meeting for residents, telling them not to post any photos or videos of the incident on social media. Some students ignored that request and images of the graffiti and vandalism spread throughout campus. Additionally, students who spoke to Rolling Stone criticized the administration’s response to the incident, claiming that DPS failed to write up a report of the incident as a campus safety alert until Monday morning, rather than immediately after the incident.

“[Administration officials] scream transparency, and they scream their main priority is student safety, but they’re contradicting that because it took so long for them to tell us,” another student of color told Rolling Stone. (When reached for comment, a representative for the university forwarded a statement from Chancellor Kent Syverud. Syverud did not address any of the specific details of the incidents of the past few weeks, but acknowledged that “one clear conclusion from discussions over the past days is the need for better communications and transparency about programs, resources and other efforts that are already in place or underway.)

Many students of color were furious about the administration’s response to the incident at Day Hall, particularly in light of similar events targeting the black community that had happened over the past few years. Last winter, three students of color were attacked by four white passers-by, with one of the assailants reportedly using the n-word. Many students criticized the initial DPS report of the incident, which failed to mention central details of the attack, including the fact that it may have been racially motivated.

The previous year, in the spring of 2018, video footage surfaced of pledges at the engineering fraternity Theta Tau performing “skits” in which they used racial and ethnic slurs to describe black, Jewish, and Latinx people. While the fraternity members were suspended, many students at SU believed the video was exemplary of a wider issue on campus. “I wish I could say that this is behavior that is isolated to Greek life, but it’s not,” one student told the campus newspaper the Daily Orange. “This is an issue with the underlying bigotry that exists at this university.” They were also outraged by the university’s handling of the controversy, particularly Chancellor Kent Syrverud’s absence at a forum intended to address student complaints, prompting the hashtag #WheresKent. Syverud responded by permanently expelling the fraternity and thanking the protesters, as well as “everyone who has emphatically rejected bigotry and hatred.”

“We have a lot of work to do, and concrete steps are more important than any words I can speak today,” he said in a campus-wide email.

Frustrated by what they see as the administration’s history of inaction, last Monday black campus activists held a student forum to air their grievances and formulate a call to action, which gave rise to the sit-ins and the #NotAgainSU hashtag and collective. Those participating in the Barnes Center protests formed a list of demands intended to build a safer environment of students of color on campus, including mandatory diversity training for new hires and staffers and instituting a zero-tolerance policy for harassment, vowing to occupy the Barnes Center until the administration agreed to meet those demands.

Following the graffiti incident at Day Hall, however, the hate speech on campus continued unabated. On November 14th, more buildings were vandalized with anti-Asian graffiti, and a swastika was drawn in the snow outside student housing. Last Saturday, it was reported that a student had yelled a racial slur at an African-American student as they walked past an academic building; hours later, a member of the fraternity Alpha Chi Rho allegedly accosted a black female student, reportedly using a racial slur to refer to her. (Though the national chapter of Alpha Chi Rho has denied involvement, the administration has since suspended all Greek life social activities for the remainder of the semester.) A Mexican-Jewish professor also received an anonymous email containing anti-Semitic hate speech, including a threat for her to “get in the oven where you belong.” 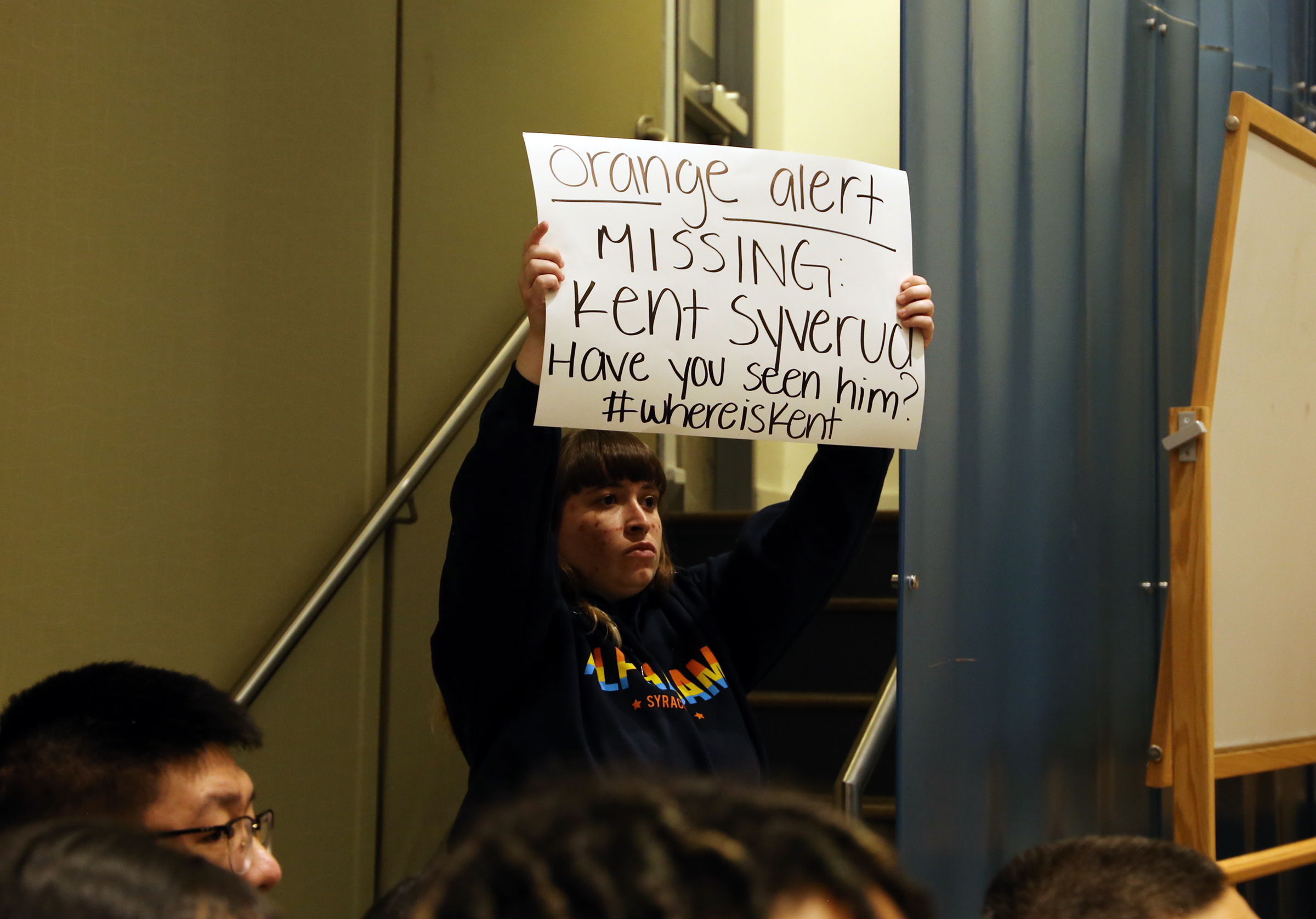 A student calls out the absence of Chancellor Kent Syverud during a forum led by Asian American and Asian International students in the Gifford Auditorium at Syracuse University on November 15th, 2019. Photograph by Jessica Tran

In response to these incidents, the university has taken some steps toward increasing security presence on campus, encouraging students to use escorts while walking alone and ramping up patrols around campus buildings. Syracuse police chief Kenton T. Buckner said in a press conference that the FBI and the state police were also investigating the manifesto, though they had so far determined it posed “no specific threat” to SU students of color. Many faculty members and students of color, however, have said this is not enough, accusing the administration of dismissing their safety concerns and underestimating the pervasive sense of anxiety and fear on campus. Of particular note was the administration’s decision not to cancel classes, instead encouraging students to avail themselves of security escorts while navigating campus. “They’re maybe prioritizing business as usual and maintaining the status quo over understanding what it feels like for students to try to navigate this type of environment,” says Jackson. Even Gov. Andrew Cuomo weighed in, accusing Chancellor Syrverud of failing to handle the hate speech on campus “in a manner that reflects this state’s aggressive opposition to such odious, reckless, reprehensible behavior.” (In his statement, Syrverud referred to the recent incidents as “deeply troubling.”

Above all else, the students of color at Syracuse want to make clear that the actions of the past few days are not just in response to the manifesto, or any of the other racist or anti-Semitic incidents preceding it. Rather, the goal is to bring attention to what they believe is the administration’s inadequate response to diversity issues on campus. (The student body at Syracuse is overwhelmingly white; 60% of the student body is white, while only 7% is African-American, according to Forbes.) “The sad truth here is that minorities are lucky if they only have one traumatic experience on this campus and I’m tired of sitting and yelling at the administration to do something about it,” one student of color said. On Wednesday, the student activists at Barnes will have been there for a week; at 5:00 p.m., they plan to meet with Chancellor Syrverud to await his official response to their demands. How he chooses to respond could potentially bring an end to the sit-ins, but it likely won’t bring an end to the lengthy history of students of color feeling uncomfortable or unsafe on campus.

“By calling these things incidents and random events, we don’t acknowledge this is part of a culture,” says Jackson. “And it undermines the experiences of those most marginalized who have to carry the burden.”
Natalli Amato contributed reporting.