Sydney Loofe had hit it off with a woman from Tinder, and the second date seemed safe enough. But for Loofe, that second date would also be her last.

Two people were charged on Monday with the murder of Loofe, a 24-year-old woman from Lincoln, Nebraska whose body was found dismembered in garbage bags and thrown into a field in December. Bailey Boswell, 24, and Aubrey Trail, 51, are currently in custody in nearby Saline County, awaiting trial for first-degree murder and the improper disposal of human remains.

Loofe was last heard from via a Snapchat selfie with the caption “Ready for my date,” before going out with Boswell on November 15th. Friends and family were immediately concerned when Loofe failed to show up for work at Menards – a Midwestern chain of home-improvement stores – her car still parked in the driveway of her home. Her mother, Susan Loofe, reported her missing on November 16th. The first of Loofe’s remains were discovered on December 4th.

Loofe’s friend Terra Gehrig was the last one to hear from her directly. Gehrig told the Wichita Eagle that Loofe had “texted me and told me about the date she had [and] how great it went and she was excited to go on another date with her again Wednesday night.”

When the case first broke last fall, news of the “Tinder murder” launched a burst of coverage regarding the safety of dating apps, and Tinder was quick to issue this statement: “We are deeply saddened by this horrific tragedy. Our thoughts and prayers are with the victim’s family and loved ones, and we are fully cooperating with law enforcement in this investigation.” When reached for comment by Rolling Stone, Tinder declined to comment further at this time.

According to a signed affidavit obtained by Rolling Stone, Loofe and Boswell communicated via Tinder roughly 140 times leading up to the night of Loofe’s disappearance. It also states that the last of those messages came from Boswell at 6:45 pm, alerting Loofe that she was outside the residence.

Gehrig insisted it was a habit of Loofe’s to use caution before heading out to meet a potential matches. “She usually always sent a picture of the person that she was going on a date with,” Gahrig told reporters. “She’d let us know whether it was going to be at her house, their house or in public.”

According to Alex Vasquez, an expert in the safety of online dating apps, and founder of the website Urban Dater, he agrees it’s best to be cautious before going somewhere you’ve just met, especially online. “It doesn’t necessarily matter how much information you give to a person at first,” he says. “I think an important part of using these social-media dating apps is understanding how easily the information you put out there can be used to research you. You’re not going to get to know someone through messaging alone. Just isn’t going to happen.”

In March of last year, Quartz published an investigation into the safety of online dating apps including Tinder, stating in a report that although “the FBI collects data about so-called romance fraud and sexploitation, data about physical assault linked to dating sites is scant.” When asked if there are any practices in place to track dating-app murders, a representative from the FBI’s Omaha Division, Huston Pullen, told Rolling Stone that “At this time, we are not in a position to answer.”

While the data may be slight, Tinder-related murders have in fact happened in the past. In December 2016, a 26-year-old woman in Mexico City went missing after having gone on several Tinder dates with a guy her age. Her bones were then found in a trash bag at his home, and he was accused of dissolving her body in hydrochloric acid after refusing to have sex with him. Just this April, a man in Winnipeg, Canada, was stabbed by two women and an 18-year-old boy after connecting on Tinder. All three assailants are currently facing charges of robbery, assault, and extortion. In 2014, a New Zealand woman fell off a balcony while allegedly trying to escape the violent advances of a man she’d met on Tinder. According to CNN, prosecutors alleged that he choked and trapped her. He was initially charged with manslaughter, but acquitted in 2016. 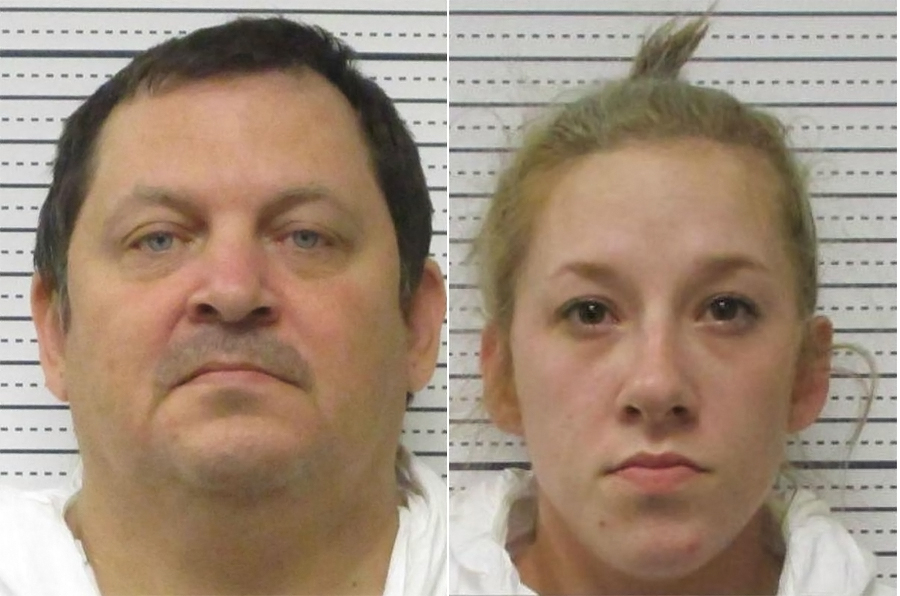 Sydney Loofe was, according to a signed affidavit, dismembered with tools the couple bought at Home Depot. However, it took authorities almost eight months to gather enough evidence to officially charge Boswell and Trail. The pair, who lived together in Wilber, Nebraska, about 40 miles southwest of Lincoln, fled the area once police tracked the last GPS coordinates of Loofe’s cell phone to a cellular tower near their apartment in Wilber, Nebraska.

Police obtained a warrant to search their basement apartment after the building’s landlord reported, according to the affidavit, that “a strong odor of bleach” emanated from downstairs. It was quickly determined that “portions of the walls of the apartment been wiped down in an effort to clean them.” The affidavit alleges that Trail strangled Loofe to death with an extension cord.

With police on their tail, Boswell and Grail began uploading a bizarre series of crass videos onto social media, insisting they were innocent, and that the police were trying to “crucify” them and that they were “chasing them around like dogs.” Boswell even admitted to having been with with Loofe the night of her disappearance, as well as their previous date the night before, yet insisted that although they’d “hit it off,” she “hadn’t seen her since.”

Federal agents eventually found Loofe and Trail in a hotel near Branson, Missouri on November 30th, and brought them back to Nebraska on an unrelated fraud indictment. With the suspects in custody, police found an additional, disturbing clue: footage of Boswell and Trail inside a Home Depot in Lincoln, Nebraska on November 15th. The affidavit states that, “at approximately 10:35 AM, on that date, Aubrey Trail and Bailey Boswell are seen purchasing the tools and supplies believed to have been used in the dismemberment and disposal of Sydney Loofe. It should be noted that Sydney Loofe was alive at that time, and began her shift later that day at Menards.”

The tragedy is that Sydney Loofe didn’t just disappear after one date with an unknown person. As she told Gehrig, she thought the initial meeting with Boswell went great, and willingly agreed to go out with her a second time.

“In spite of all the heat it gets from people, everyone keeps going back to online dating platforms like Tinder,” Vasquez said to Rolling Stone. “They’re easy to use and help to promote a very specific fantasy, depending on what you’re looking for. But part of safe dating is understanding that how the information you put out to represent you can also be used to research you. Even if you’re really smart about online dating and doing all the right things, and checking the boxes, there are still bad people with worse intentions out there and they’re going to try and take advantage and outsmart you.”