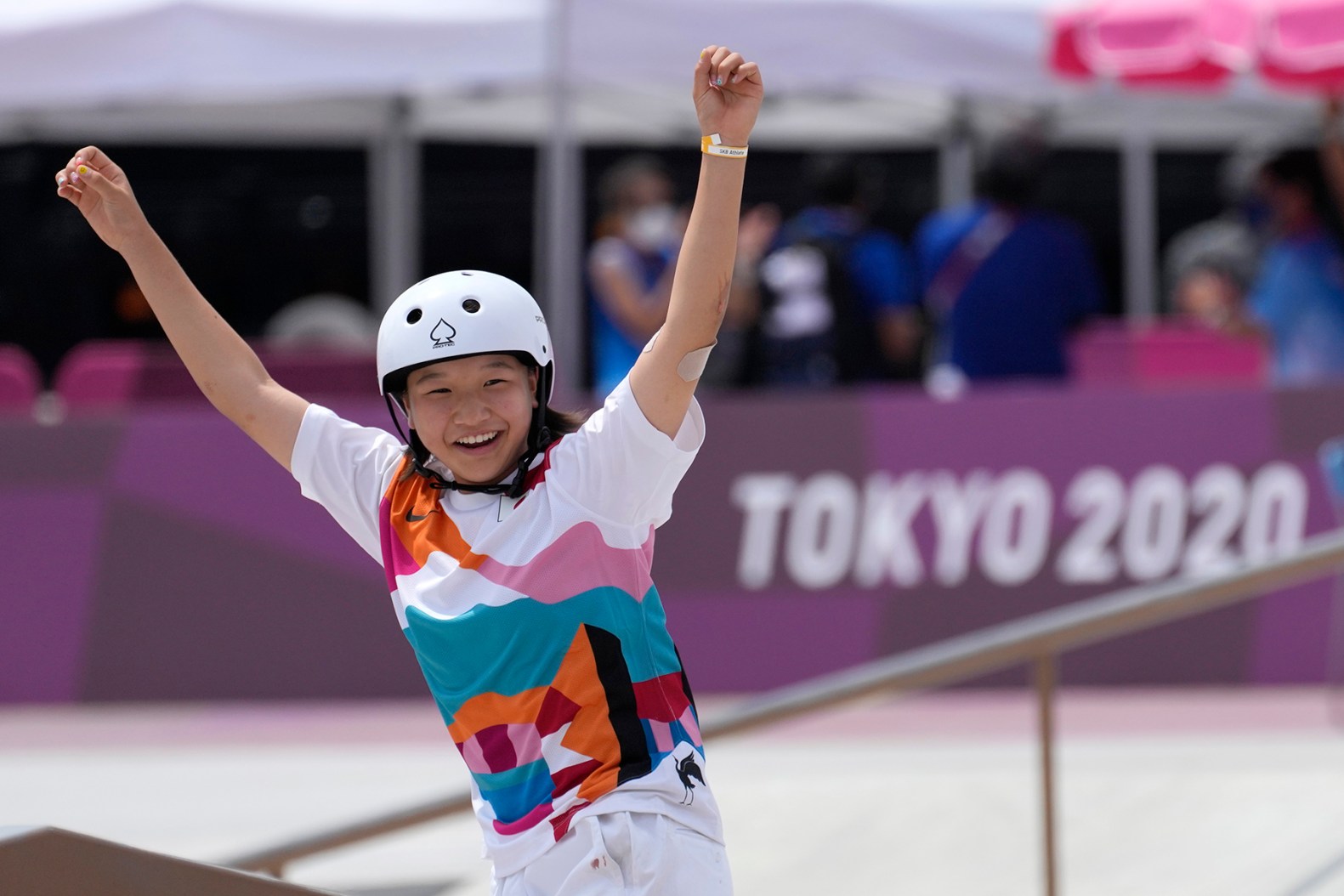 Japanese skaters won three of the six medals in Skateboarding’s Olympic premier, with Yuto Horigome, 22, and Momiji Nishiya, 13, both taking gold in the street competition. Beside Nishiya on the podium Monday afternoon was another 13-year-old, Brazil’s Rayssa Leal, who took silver, and fellow Team Japan member Funa Nakayama, 16, who got the bronze.

Many of the skaters most heavily favored to medal did not make it to the podium, or, in some cases, even out of the qualifiers.

The format for the street competition borrows from contemporary skateboard contests, with a panel of judges awarding scores based on trick complexity, use of obstacles, and execution. Each skater did two 45-second runs, and then five single-trick attempts. The former demonstrates flow and consistency, similar to a floor routine in gymastics. The single “Best Trick” portion is for harder, more daring attempts, frequently on the biggest obstacles — think vaulting in gymnastics. The three lowest scores are dropped, and the four remaining scores add up to each skater’s ultimate ranking. Unlike gymnastics, the scoring system recognizes that falls, slams, and bails are a par for the course, and thusly factored into the tabulations.

Street is one of two skateboarding events in this year’s Olympics. The other, Park, is focused on transition skating in a large cement bowl sprinkled with obstacles for extra flair and nuance. Many casual skateboard spectators might be surprised there is no competition on a vert ramp, but the Park setup is more in line with what’s popular and accessible in contemporary skating, and will allow for a little more variety than a traditional vert competition.

A Skateboarder Quit the Olympics to Come Out As Trans. A New Doc Shows His Journey

In the men’s competition on Sunday, the field of 20 skaters in the qualifiers was winnowed to just eight after four heats. In the finals, most of the skaters repeated the exact same 45-second runs they’d executed in the qualifiers, making for repetitious viewing, even if it was of maneuvers as technically complex and physically dangerous as Frenchman Aurélien Giraud’s hardflip backside lipslide down a 12-stair handrail (a very, very hard trick that has what is technically referred to in skateboarding as “a high slam factor”). The Best Trick attempts were a little more interesting, particularly as competitors started taking bigger risks to improve their standings.

Team USA’s Nyjah Houston, 26, was heavily favored in the contest, given not only his talent for grinding very tall and very long objects, but the consistency of his victories in global skateboard competitions for several years now. He is known as a skater who performs well amid the pressure and rigid structure of comparable events. But even after a lot of technically masterful big-rail skating, Houston slammed several times in a row during the Best Trick section and couldn’t catch up to peers who rolled away from comparably tough feats. He finished in 7th.

Houston’s teammate, Jagger Eaton, was the only American to medal in the street competition. He bopped his head along to music in between runs, an earbud falling out and skittering away on at least one fall. Even though music was piped into the sprawling concrete street course, almost all the skaters wore headphones, sliding phones in and out of their pockets as they hyped themselves up.

The women’s Street contest on Monday was less technically impressive, but much more fun to watch, in large part because there was more of the joy and camaraderie that marks skateboarding outside of the structured contest format. Skaters hugged, cheered, and dapped one another more frequently and vigorously as the competition heated up. The Philipines’ Margielyn Didal, in particular, took some of the hardest slams of the day, but also appeared to be having the most fun, limping off the course only to be dancing and laughing minutes later.

Several of the top-ranked women skateboarders who were expected to medal got knocked out in the qualifiers, including American Mariah Duran, 24, and Brazil’s Pamela Rosa, 22, and Leticia Bufoni, 28.

Alexis Sablone, 34, was the only American to make it into the finals, squeaking out of qualifiers to round out the top eight. Sablone is beloved by fellow skaters, and one of the few Olympic competitors with abundant credibility among the legions of non-professional skateboarders who make up the activity’s vast subcultural and commercial base. Sablone is a real street skater, and threw enough adept kickflips into her runs to get within striking distance of the podium. But her final attempt in the Best Trick section — kickfliping into a backside 5-0 grind (a hard, dangerous trick with a solid slam probability) down an eight-stair ledge was a bust. Sablone took fourth place.

That made her the oldest of all the street skateboarding finalists — and more than double the age of the oldest women’s medalist, 16-year-old Nakayama. Because of their minor status, all three of the women’s medal winners were required to wear helmets when they competed. Thirteen-year-old Brazilian prodigy Rayssa Leal, who came to social media prominence skateboarding in a fairy costume when she was still in single digits, took silver, dancing joyously and beaming an adolescent smile full of braces in between runs. Even though the stadium surrounding the street course was almost entirely empty, the stacked roster of talented Brazilian skateboarders cheered vigorously for her from the stands.

Nishiya, just a few months older than Leal, won through a mix of consistency, style, and boldness. Her 45-second runs were dense with hard tricks stitched together with a confident flow through the park: dipped backside smith grinds, long boardslides, flawless bigspin front boardslides down handrails. She took many of her most difficult moves from those runs and upgraded them onto bigger obstacles in the Best Trick section, slamming hard enough to bloody her elbow at one point, which a coach casually flushed with a bottle of water on the sidelines. As if to prove a point, with her victory all but assured, she used her last Best Trick attempt to charge off a kicker ramp and throw a massive gap to lipslide down an eight-stair handrail, a daring use of obstacles nobody else had tested up to that point in the competition. She rolled away clean, pumped and smiling, leaving spectators wondering, “What else can she do?”

The women’s Park competition is on August 4th, the men’s on August 5th.