The Satanic Temple is threatening legal action against Netflix for the use of a Baphomet statue strikingly similar to theirs in the new series The Chilling Adventures of Sabrina. The Temple’s co-founder and spokesperson Lucien Greaves tweeted Sunday that their monument design is copyrighted, and that the show “appropriated” it. He also tweeted images of the two statues side-by-side, “for purposes of comparison.”

The new show, which premiered this month and stars Kiernan Shipka as a young Sabrina the Teenage Witch, a reprisal of Melissa Joan Hart’s iconic Nineties role, has been well-received by audiences and critics so far, beyond this dispute.

When a Twitter user suggested that the show’s use of the icon could be considered free publicity, Greaves replied, “Having one’s central icon associated with human sacrifice in an evil patriarchal cult is hardly good exposure and hardly a frivolous complaint. Fighting this bullshit is the heart of ‘the cause.’”

“The show’s creators did not utilize a generic Sabbatic goat that is commonly used in many occult circles, such as the image created by Eliphas Levi, but instead created an identical and easily identifiable replica of TST’s statue,” Greaves tells Rolling Stone. “Unlike most imagery associated with Satanism, the unique Baphomet statue designed and built for TST is copyrighted, which grants the creator exclusive rights to determine whether, and under what conditions, this original work may be used by others.” 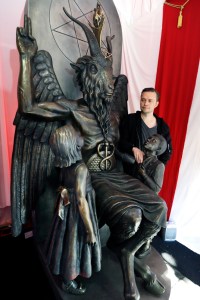 Lucien Greaves stands next to a 9-foot statue of the goat-headed idol Baphomet at the international headquarters of the Satanic Temple in Salem, Mass., 2016.

“Given the show’s utilization of the Baphomet statue to represent an evil cannibalistic cult, a perception falsely associated with Satanism even in modern times, TST would have denied its use to the show creators,” he says. “Not only does it contradict what Baphomet represents, we owe it to those who identify with us to not allow this image, and by extension them, to be represented in this way.”

In a copy of the demand letter sent to Netflix and Warner Bros., provided to RS by the Temple’s legal consultant Stuart de Haan, they asked that the company: “By November 9, 2018, please (1) take down any advertisements that features the likeness of the Baphomet monument; (2) take down and refrain from any use of the likeness from the ‘Chilling Adventures of Sabrina’ or any other works; and (3) produce an explanation behind the origins of the monument as used in the ‘Chilling Adventures of Sabrina.’” The demand also notes that this matter could ideally be resolved without litigation, if they’re willing to comply with these requests.

“My client is struggling to overcome centuries of stigma surrounding their religious symbolism,” de Haan explains in the letter. “My client has expended considerable efforts in the design and creation of their particular expression of Baphomet, the goat-headed deity represented by this monument. This statue is an original work and, until now, has been associated exclusively with The Satanic Temple all around the world. This has deep religious significance to my client’s organization.”

The Satanic Temple has been at the center of high profile legal battles and controversies in the past, most recently claiming that Twitter’s failure to take action against an account that advocated setting fire to the Temple’s headquarters was religious discrimination, and before that creating After School Satan Clubs to protest the presence of Evangelical afterschool programs at public schools. (The Satanic Temple is not to be confused with the original Church of Satan, founded in 1966 by Anton LaVey. The two organizations have publicly feuded and denounced each other.)

Sources at Netflix declined to comment on their use of the Baphomet image, noting that no official claim has been filed as of this time.