“If it ain’t fucking cool, I don’t need it,” explains RZA, iconic producer and rapper. Fortunately, plenty of projects have been enticing to the Wu-Tung Clan member lately: this year, he produced standout tracks for Kanye West and Jay-Z’s Watch the Throne and worked on two films (his own kung-fu epic, the upcoming The Man with the Iron Fist, and Quentin Tarantino’s Django Unchained) while contemplating Wu-Tang’s next moves.

As we announced this summer, RZA also has developed Chambers, an upcoming headphone series with audio brand WESC. Emphasizing their deeply dynamic – even collaborative – listening experience and attractive design options, he considers the line “a step towards filling the void” that he says plagues the digital listening experience. Rolling Stone recently caught up with the artist in Los Angeles to discuss Chambers, the importance of Wu-Tang Clan’s style contributions and more.

Do you think the technology we use to listen to music has transcended the importance of the music itself for most consumers?
I wouldn’t say it’s transcended it, but it’s definitely a sign of the times. Look: we like cool shit in America. We’ve all got the iPhone, the iPad and the iPod. Somehow my son is making calls from his iPod touch, I can’t even keep up with it. (laughs) I don’t have a problem with how consumed we are in our personal technologies, but I do have a problem with the way music sounds that way. It sounds shitty, because it’s compressed.

Do you think people notice the compromised listening experience?
Well, it’s like a seedless orange. If that’s all you’ve ever eaten, you won’t know how the real thing tastes. Which is a shame. Kids today won’t know how powerful music can sound from MP3s alone unless they go out of their way to experience it. Plus, it’s scary how disposable our libraries have become. My buddy just gave me an iPad with 30,000 songs on it, and I appreciate that gift, but the Al Green library suddenly doesn’t play anymore. At Thanksgiving, I was like, “Yo, fire up Al,” and my friend said, “Oh, Al don’t work no more, baby.” Just like that. (laughs)

How would you like to see the digital model improve, at least aesthetically?
I think what I’m doing with my new headphone series, Chambers, is actually a step in the right direction. I wanted the iPod generation to still enjoy a strong sound, and I wanted it to feel special and unique and stylish. I put a lot of thought into making that happen. Again, if it’s not cool, I’m not interested. And I think that’s how everyone thinks now. These are meant to make digital sound great, but if you happen to listen to vinyl with these – always the best! – you might actually orgasm.

With so many competing musician-mandated headphones on the market, how is Chambers cooler?
I’ve provided modern options based on your needs and style. I wanted a pair of headphones that was loud enough for a DJ – a pair that could kind of isolate you so you can focus in. Sonically, I wanted the premium version to be something you could mix to as a producer. So I have a specialty deluxe variety, as well as the general street version, which still have a kick. 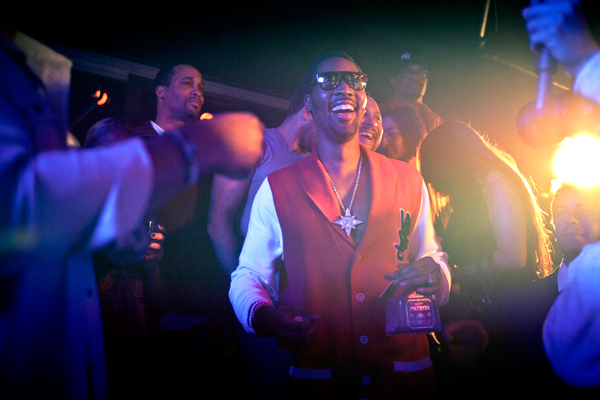 What do you think is the Chambers headphone series’ most unique feature?
You can daisy chain between devices, which is very cool and unique and ideal for DJs. You can put two, five, or twenty of these together and not compromise sound quality. This way you can play a sick song for your buddy and listen to it together, which is an idea I stole from my girl! She always wants to listen in, check out what I’m doing. It’s part of our culture of sharing, so it only makes sense for us to update our devices to be able to do that.

How does your fashionable side come through with the project?
The whole look of the headphones is fun and fashionable – there’s even lights on the side just because it looks cool. I also was inspired by the colors of the favorite things in my life, and my friends’ lives, for the palette. I thought black matte would be cool – it’s the “goth” choice, while the blue ones you can wear with your Nikes, which a lot of dudes do. I have friends from all walks of life, and I absorb how they present themselves. Everything I do reflects something I live.

Will you be releasing more editions?
I’m still tweaking these. They actually hit stores properly in 2012, so there’s time. I would like to add a DB or two bass switch. It would be great to have that option, but it’s surprisingly hard to get that right with a pair of headphones that isn’t battery-powered. And I hate battery-run headphones!

Do you remember your first personal player?
(laughs) Yeah, I had a fucking Walkman. Secondhand. It served me well for many years. I even had the yellow shock-resistant one, so it was “sporty.” And actually, I like to think the headphones I’ve designed are kind of sporty.

Changing tack a bit, Wu-Wear was pioneering for a hip-hop clothing brand. Clearly, many subsequent labels took cues from its successes. Any plans to revive that project?
Funny you ask. We’ve actually been talking about [that] – my brother Oli Grant has been talking about reviving it sometime soon, and I will leave it up to him to make that choice. I definitely used to be really involved with it, down to some of the more subtle style decisions. I was the one who introduced the drawstrings on our pants, since I personally could never find a belt to wear and wanted to create options around that. And I have some new ideas about how to dress skinny guys like myself. We’ll see where it all goes. But for now, please enjoy my film.

What can we expect from that project — and Tarantino’s?
I can’t talk about his just yet, but you’ll be learning more about my own film very soon. I’m planning some special projects around it. And you know, I’m thinking it’s been awhile since I’ve made my own music and I miss it. I want to give a nice piece of music to the world again. Stay tuned!