Puerto Rico: What's Going On, How You Can Help - Rolling Stone
×

A week after Hurricane Maria made landfall directly over Puerto Rico, the death toll stands at 16 and millions suffer from loss of power and running water.

The Category 4 hurricane – the first to hit the island since 1932 – sustained 150 mph winds and poured over 30 inches of rain across the United States commonwealth. The storm forced at least 15,000 people into shelters, destroyed structural and housing infrastructure, shut down electricity, disrupted the distribution of gasoline and medicine and limited food and water supplies. One of the most immediate threats comes from a crack in the Guajataca Dam, a 90-year-old structure that holds 11 billion gallons of water in the northwestern corner of the territory.

Puerto Rico Governor Ricardo Rossello continues to ask Congress to approve an aid package for the 3.4-million population, who are indeed American citizens. On Tuesday, Rossello told the Associated Press that he spoke “as recently as last night” with President Donald Trump about the storm’s effect on the island and is “confident the president understands the magnitude of the situation.”

Federal agencies and military assess infrastructure damage on Puerto Rico
Maria is weakening as she moves north on the Atlantic coast. But her wrath has already devastated Puerto Rico. Down in San Juan, the capital and largest city on the island with a population of 400,000, Rossello told the Washington Post that he joined U.S. National Guard troops on Sunday to assess flooding and deliver water, food and medical supplies.

Meanwhile, the Federal Emergency Management Agency and other federal groups, such as the Department of Health and Human Services, have been on the island since the storm landed. On Sunday, FEMA said in a press release that six federal Urban Search and Rescue task forces were deployed to the U.S. Virgin Islands and Puerto Rico “to rescue and render aid to distressed survivors in the region.” Also, the Department of Defense deployed helicopters for rescue flights, as the U.S. Coast Guard were en route to operate nine vessels off the islands.

On Monday, Pentagon spokesman U.S. Army Col. Rob Manning said in a statement that the FEMA and the DoD are in the Caribbean “to conduct 24-hour operations, aggressively conducting search and rescue operations, bringing additional essential commodities to the islands and restoring power at critical facilities with generators and the fuel needed to power them.” Also, Manning said the DoD deployed the U.S. Marine Corps and U.S. Navy teams on Puerto Rico “to conduct route reconnaissance, clearance of main roads and clearance of the airfield and associated taxiways.” The USS Kearsarge Amphibious Ready Group completed eight medical evacuations and 123 airlifts and delivered 22,200 pounds of supplies and cargo to the islands. The Navy worked with the Coast Guard to reopen the port of San Juan. 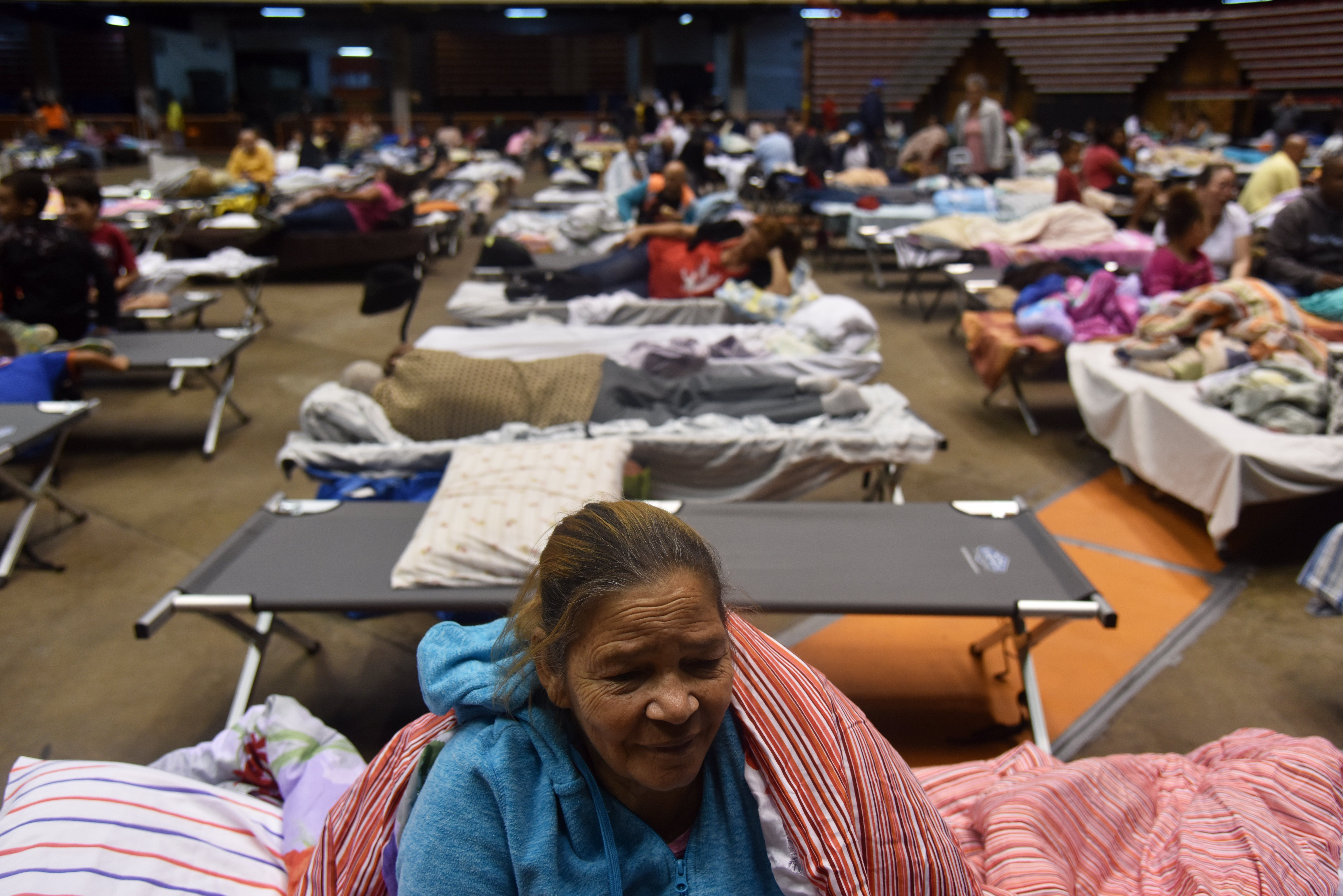 Hurricane Maria destroyed power across Puerto Rico
President Trump said that the hurricane had “totally obliterated” Puerto Rico and destroyed its electrical grid. When Hurricane Irma hit the island it shut down 70 percent of the power – then Maria hit to completely put the territory in the dark. Rossello and local officials predicted that it could take up to six months to resume electrical service, according to The New York Times. New York Governor Andrew M. Cuomo visited the island to meet island officials and discuss possibilities to restore electricity. “We expect three to four months at most for the whole island,” said Cuomo, who arrived with 10 generators, 34,000 bottles of water, 500 flashlights, and 1,400 cots and blankets.

Puerto Rico has limited gasoline
Gas stations on Puerto Rico are running out of gas and waiting on tankers to arrive onto the island, according to a NPR report on Tuesday. Hundreds of cars lined the roads for over six hours at a gas station 15 miles east of San Juan. People need to fuel their cars and generators, now the main source of power on the island. Officials said that the hurricane “disrupted” the distribution of gas, but didn’t create a gas shortage.

Puerto Rico struggles to maintain medical, food, and water
The Canovanas Medical Center in northeastern Puerto Rico is among medical hospitals that are 2-3 days out of losing medical supplies and medicine, according to CNN. Hospitals are treating patients but are limited on water and without water-powering air-conditioners.

Nearly everyone on the island remains without power and half the people don’t have water. On Tuesday, the Associated Press reported that power is still out at most food stores and restaurants across the commonwealth. SuperMax, Walgreens and Walmart reopened some stories across the island in the San Juan area and towns such as Caguas and Dorado. People are limited to using cash, since credit card transactions aren’t being processed at many stores and restaurants.

Overall, Puerto Rico suffered a loss of $780 million in agricultural yield from Maria, compared to a $45 million loss from Hurricane Irma three weeks ago. Officials said that the island, which imports about 85 percent of its food, will rely even more on imports following the storms. Rossello said the Coast Guard has been working to clear some ports, so the island can begin accepting ships carrying supplies. 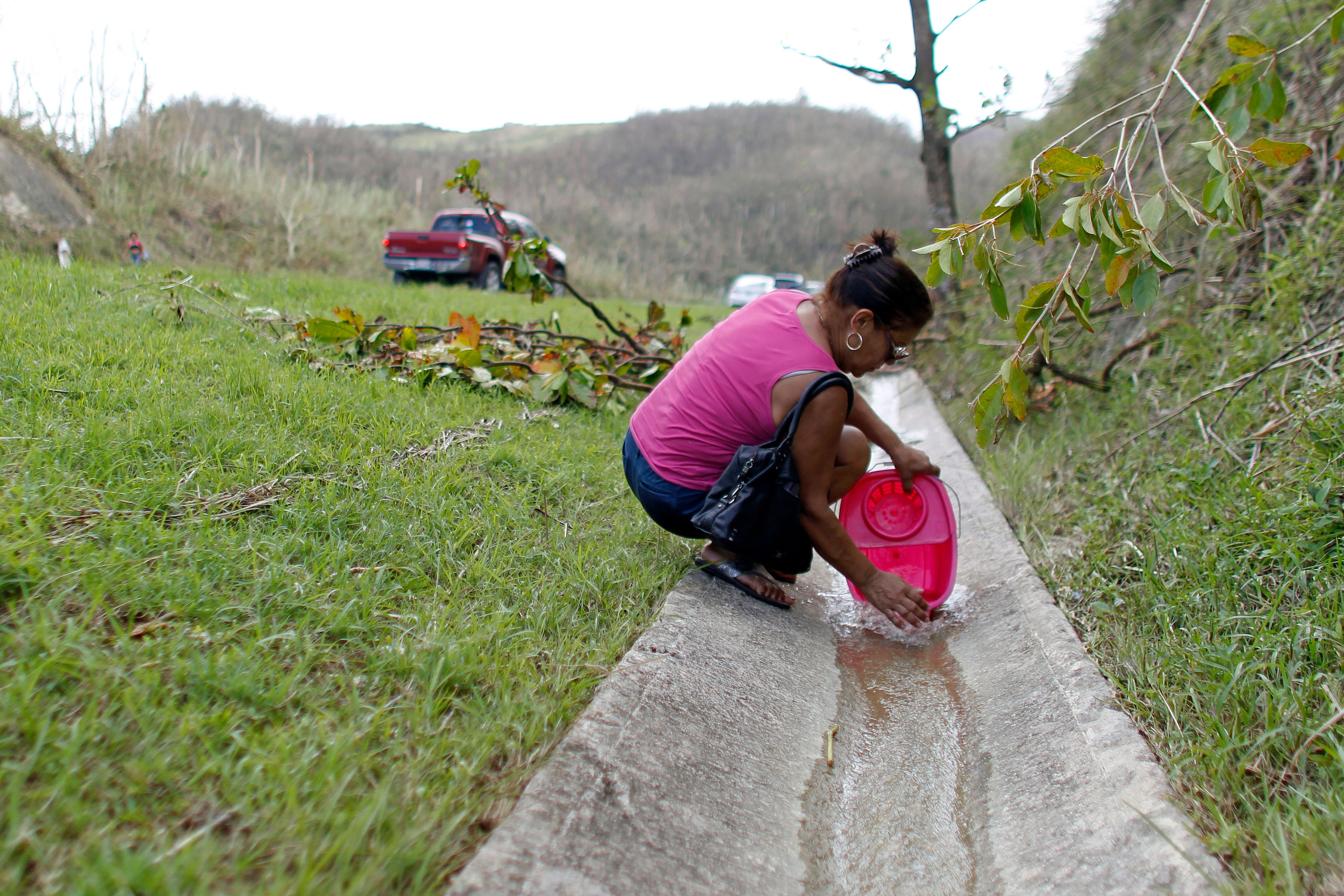 Potential dam failure in northwest Puerto Rico
The Guajataca Dam is in “imminent” danger of failing, according to the National Weather Service. Last week, the NWS San Juan posted a tweet: “Flash Flood Emergency for imminent dam break #LagoGuajataca continues. If you live along #RioGuajataca? evacuate.” Rossello said there was “significant damage” to the dam which developed a crack during the storm, according to The Associated Press. Rossello said that 70,000 people from the towns of Isabela, San Sebastian and Quebradilla were being evacuated from that area. Local officials said only 300 families were under threat. The U.S. Army Corps of Engineers has conducted a “preliminary inspection” of the dam and continues to work alongside Puerto Rico emergency managers in monitoring it.

People are searching for missing family members
The FCC estimated that over 95 percent of Puerto Rico’s cell sites are out of service. At least 1,360 of the island’s 1,600 cellphone towers are down and 85 percent of phone and internet cables are knocked out, according to The Associated Press.

The loss of cell and internet connections has pained people struggling to connect with family members on and off the island, according to the Los Angeles Times. People on the U.S. mainland are calling in reports of missing people to WAPA 680 in San Juan, as they continue to search for relatives via social media. The Facebook page Puerto Rico Maria Updates has searchers posting inquiries about their relatives.

The Puerto Rico Federal Affairs Administration has been offering help to searchers at 202-800-3133 or email maria@prfaa.pr.gov. People are registering and posting messages on the searchable American Red Cross Safe and Well page.

How to help Puerto Rico
Politicians and celebrities have extended their arms to help the people of Puerto Rico. On Monday, Jennifer Lopez announced that she and Alex Rodriguez are “garnering support” for donations and contributions. Lopez said she will be donating $1 million from the proceeds from her Las Vegas to charitable and NGO organizations. Cuomo added that the New York government built website, titled, “Empire State Relief and Recovery Effort for Puerto Rico”, as the state launched collection points where citizens can drop off donations statewide.

For readers interested in helping Puerto Ricans affected by Maria, philanthropic experts recommend donating to established charities. There are numerous organizations, including the local Unidos, by the Hispanic Federation, a relief fund going to community and civic organizations, and Unidos por Puerto Rico, an initiative from the first lady of Puerto Rico Beatriz Rossello; and the national All Hands Volunteers, which works with volunteers, and Direct Relief, which is working with local authorities to deliver medicine and medical supplies. Check out Charity Navigator and GuideStar to learn about individual charities and groups and learn how they will spend your donations.

Donate to the American Red Cross via text by sending a text message saying “REDCROSS” to the number 90999. Also, GoFundMe has a page for Maria. And on Google, search “Hurricane Maria,” scroll down, and donate to the Center for Disaster Philanthropy.