New York Times columnist Maureen Dowd will never forget her bad experience with a marijuana candy bar this year – and the eight-hour “hallucinatory state” it put her in – at least in part because the pot advocacy group Marijuana Policy Project won’t let her.

Earlier this year, the organization used a Dowd look-alike in billboards showing a redhead in a state of distress with the slogan: “Don’t let a candy bar ruin your vacation. With edibles, start low and go slow.” Now the Project has repurposed the image for its Christmas card. 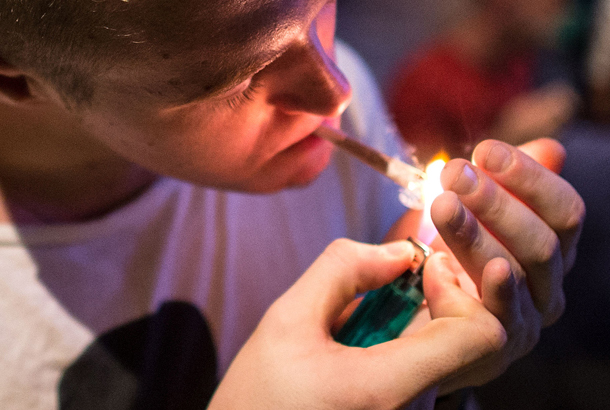 “We decided to go ahead and make her a Christmas-themed version, and we mailed it to her on Friday,” a rep for the organization told Washingtonian. “The message is just as important this holiday season as it was earlier this year.”

Willie Nelson: Obama 'May Be Happy' With Weed Legalization

The card shows the same faux-Dowd clasping her temple this time with a Christmas tree and fireplace sizzling in the background. The organization changed the slogan to say, “Don’t let a candy bar ruin your holiday” and at the bottom wrote “Merry Christmas” in seasonal script.

A Times spokesperson told Washingtonian that Dowd is on vacation. It is unclear whether or not she has received it.

One person who came to Dowd’s aid this year was weed connoisseur Willie Nelson, who told Rolling Stone that the columnist is welcome on his tour bus to talk pot anytime. Dowd took him up on the offer and ultimately called the red-headed stranger her “Marijuana Miyagi,” after their chat.

“Honestly, I don’t do edibles,” Nelson told her. “I’d rather do it the old-fashioned way, because I don’t enjoy the high that the body gets. Although I realize there’s a lot of other people who have to have it that way, like the children that they’re bringing to Colorado right now for medical treatments. Those kids can’t smoke. So for those people, God bless ’em, we’re for it.”