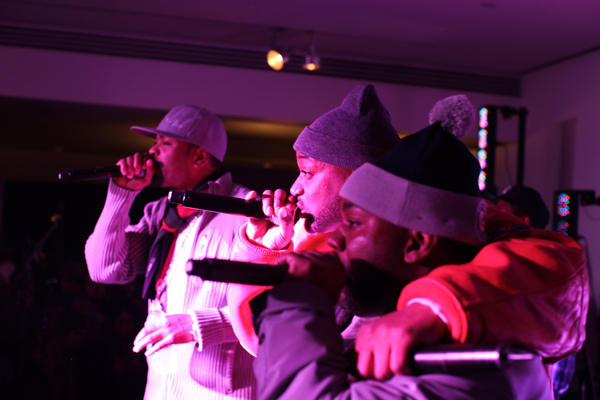 • New York Fashion Week kicked off yesterday with an unusual guest: Wu-Tang Clan. Well, three-eighths of them, anyway. Even with a skeleton crew version of the super-group present, Method Man, Ghostface Killah and Raekwon kept the feverish crowd at Milk Studios thrusting until 3 a.m.

• Just around the corner, the Kills played a supremely intimate show at the Top of the Standard Hotel. Though not officially on the Fashion Week grid,  illustrious guests like Alexander Skarsgard, designer Phillip Lim and models Lindsay Ellingson, Alexa Chung and Jessica Stam checked out the show. Rumor has it that Lindsay Lohan was also lurking. Alison Mosshart is now a redhead, as seen on the cover of Lovecat.

• Lana Del Rey, who is high on our Fashion Week front row radar, graces not only the Lovecat’s (alternate) cover but also the upcoming issue of The New York Times‘ T Magazine. In the feature, she reiterates the origins of her unconventional musical concepts and creative process and how her recent success comes as a pleasant shock.  “‘Video Games’ was a four-and-a-half-minute ballad,” she says. “No instruments on it. It was too dark, too personal, too risky, not commercial. It wasn’t pop until it was on the radio.” Inevitably, she also insists once again that her lips are au naturel.

• Fergie has signed a deal with Wet ‘n’ Wild cosmetics, serving as their first ever celebrity spokesmodel. WWD discuss how the singer’s “broad appeal” will work well for the cult drugstore brand, noting that her collaboration with MAC’s Viva Glam initiative brought in $3 million in profits. It turns out that Fergie has always been a fan of the cheap and cheerful makeup line: “In Hacienda Heights, there were a lot of beautiful chola girls. They wore Wet ‘n’ Wild. I would watch them put on their eyeliners and lip liners at school,” she says.

• Jennifer Lopez tells WWD she feels “picked on.”  She says, “It’s hard sometimes, I’m not going to lie. I try to stay away from the media as much as I can.” She also discusses life after Marc, her recent music projects, and new fragrance, Glowing.