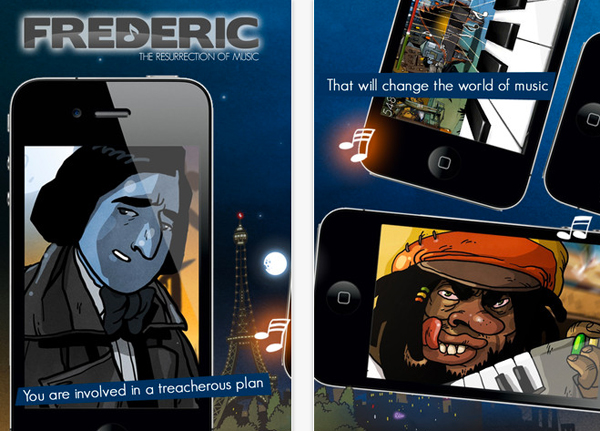 Topsy-turvy as music gaming’s fortunes have been lately, classical composers’ success as mainstream crossovers has been even spottier since Falco’s “Rock Me Amadeus” topped Billboard’s Hot 100 chart in 1985. This makes the growing popularity of the recently released downloadable rhythm game Frederic: Resurrection of Music, starring the 19th century Polish virtuoso Frederic Chopin as a playable character, all the more unexpected.

At odds with previous video game cameos such as Eternal Sonata (yes, they exist), the iOS app, compatible with iPhone, iPod Touch and iPad, eschews fantasy role-playing trappings to make music the central focus of play. Taking a nod from gonzo outings such as PaRappa the Rapper and UmJammer Lammy, the equally-offbeat tale begins with the pianist climbing from his grave with help from the Muses, then battling a succession of modern stereotypes. Enjoyed by tickling a touchscreen piano’s virtual ivories in time with cascading note icons and contemporary remixes of classical hits, the action is effectively divided into a series of standoffs against unlikely opponents. Don’t be fooled by simple mechanics, however: clearly designed under the influence of foreign substances, duels pit the Romantic icon against an increasingly bizarre range of opponents that includes DJs, leprechauns and reggae singers.

Set in an alternate future where the music industry is dominated by a handful of soulless labels, the underlying tale likewise dispenses with propriety and accuracy, casting the celebrated composer in the role of undead savior. Pairing cartoon videos and voice-overs with quirky comedic touches, its inexplicable turns span global hotspots including Texas, Ireland and Tokyo and multiple music styles such as chiptune and country. Cleverly, each step of the odyssey culminates in a melodramatic end-boss showdown. The net effect: interactive musical updates you can battle through that reimagine nine of his most popular waltzes, nocturnes and mazurkas by way of contemporary genres such as reggae and electronica.

Purists may bristle at the Adult Swim-ready aesthetic, many historical liberties taken and extreme makeovers that the musical arrangements have been given. But inherent ironies and short game length aside, the title’s user-friendly nature and oddly enjoyable spin on Guitar Hero‘s format may resonate well with casual observers. On paper, the work sounds absurd, and the story doesn’t disappoint, failing to provide many cohesive threads as its insane plot unravels. But what the touchscreen-ready offering lacks in clarity, it more than makes up for in insane personality and sly digs at pop culture.

Players interested in seeing how Chopin’s catalogue transfers to today’s era can currently sample the title for free. Alternately, you can skip the interactive acid trip entirely and download its soundtrack for $5.99 from iTunes.