Comic fans rejoice! Twenty-five years after Neil Gaiman broke through with his classic series The Sandman, DC’s Vertigo imprint is bringing it back in a limited run this fall. His seriously lysergic storylines – a writer who enslaves a muse to become a literary superstar or Lucifer himself turning over the keys to the gates of hell to become a beach comber – took monthly comics to new dimensions, reimagining the form while revering it at the same time. Gaiman sounds energized at the prospect of revisiting his creation. “When I was originally writing Sandman, this was a story that for one reason or another never got told,” he tells Rolling Stone. “But when we started heading towards 25th anniversary territory – which seems frankly completely barking mad, how the fuck did that happen? – we knew we had to do something. The new story arc will go back to the very beginning of the series and answer some basic questions raised in Sandman number one.”

At 52, Gaiman remains the polar opposite of the stereotypical comic-book guy. He’s lean, British, always dressed in black (“I started in my twenties, so I never would have to worry about matching colors,” he says) and endlessly cool.  He’s also extremely busy – in addition to The Sandman, he’s written dozens of books, from bestselling fantasy novels to the dark children’s fable Coraline. When we caught up with him, Gaiman was about to jet back to London to catch the debut of Tori Amos’s new musical. “We’ve been friends 22 years now,” he says. “I’m the the godfather of her daughter and she’s the godmother of mine.”

Why go back to the very beginning of the Sandman narrative after all this time?
Well, one pretty obvious question that nobody actually asked when the comic book came out was basically why was the Sandman so easy to catch. You start with issue number one and you have Dream of the Endless, one of the most powerful beings in the universe, and he’s caught by a little bunch of half-fake wizards pretending to do Aleister Crowley-esque black magic in their basement. They catch him and they don’t really even know what to do with him. But how did he get caught so easily? Why was he dressed for war?  Why did he have all this stuff with him? So you learn as The Sandman goes on that he was on his way back from a distant galaxy and tired beyond exhaustion.  And I didn’t get to tell anybody the story of what had happened.

Is that how you like to work?
Normally. Occasionally, it’s the other way around – I have ideas, brilliant tiny things that the big story needs to fit into.  But yeah, in this case, I knew the shape. The whole of Sandman was written like that: I had an idea of the shape of a story that I wanted to tell and the details grew in time. For me, the real fun of the thing was suddenly here is a story where I’ll go, “I need a character.  I just need somebody on this page doing this thing.” And I’ll make somebody up. And then as the story goes on, that person that I made up became incredibly important.

Was it hard to come up with new stuff every month?
I started to feel an enormous amount of sympathy and empathy for Charles Dickens, because he was doing the same thing – a serialized story. And I started reading Dickens in a very, very different way. While writing The Sandman I’d go, “Ah, this is part of the big plot that you absolutely know what you’re doing, and this bit is you going, ‘I’m not quite sure what I’m doing here, so I’m gonna busk a little bit. And this is you just bringing on a character and just going I know I’ll find a use for you somewhere down the line.'” These days, probably the nearest thing to it outside of comics would be serial television, if you had just had one writer.

I was just thinking that, like Matt Weiner writing Mad Men, or Vince Gilligan with Breaking Bad, where you’re producing hours and hours of material. . .
It’s more like what you’d be if you were Vince doing Breaking Bad with no writing team. But the one thing that TV has is the same thing wonderful thing that Dickens had, and same thing that I had – to be able to take stock of what you’re doing and what’s working as you go, to the point where you bring on somebody who was a little better than an extra and you go, “Actually, everybody really likes that guy and we like that guy!  Let’s bring him back and have him do something else.” And by season two he’s one of the stars and nobody actually remembers that he wasn’t even in the original outline. There were definitely things when I was writing Sandman that were like that. And in a peculiar way, there are moments when I’m writing Overture where I get to do little things that set up for later things that I wasn’t expecting.

Like what?
I loved bringing back the Corinthian. The joy of writing Sandman Overture is almost this weird feeling, like, “I wonder if these characters are still there in my head. I wonder if they still sound like themselves. I wonder if their voices are there.” And you go in and you go, “Yep! They’re there! That’s her. That’s what she’d say.”

Is the character sort of an idealized version of yourself?
God, I hope not. The only thing that I think is particularly funny is that when I was a young man with very normal hair, I was writing Sandman with huge, weird, crazy hair.  Now that I’m old I seem to have pretty much default crazy hair no matter what I do. I have this Einstein meets Robert Smith mashup haircut. The only things that I really noticed that I borrowed from me, when I was writing him, was the dress sense of somebody who figured out how to get on with life wearing black jeans and a black t-shirt. I said, “Here you go. You can wear black. It’s a nice color. It goes with anything.”

You called yourself critic proof in The New Yorker. Is that a good thing for a writer to be?
I think it’s just a thing.  You know, the context of that was that for most of my writing career, I was ignored. Nobody was looking. There was only one article in the mainstream that was ever written about Sandman while it was still going on, and it was Mikal Gilmore writing in Rolling Stone in the Hot Issue in about 1990. So Sandman wasn’t made by critics.  Nobody gathered around and went, “This is the thing you should be reading.” It was never imposed from above.  It was this thing that came up from below.

That’s kind of a nice thing though, isn’t it?
I think it’s lovely.  And I love the fact that Sandman is now regarded as this big, glorious, seminal, important thing. When I was writing it, it was this weird, monthly comic done by this British guy. Sandman was never considered a big critical hit and definitely never a commercial hit. Having said that if you took all the sales of all of the graphic novels since Sandman started coming – I did this in 2003, so that was 10 years ago – but at that point I think we worked out that each issue of Sandman would have had to have sold 3.5 million copies a month.

You’re life is so open and out there online, in terms of your marriage to Amanda Palmer. What, if anything, do you hold back?
Well I hold back – I have huge lines in the sand. Of course, the weirdest thing is getting married to someone whose lines in the sand are in completely different places. I had an incredibly embarrassing conversation late night last night talking to somebody who had been reading my wife’s blog in the early days of us getting together.  And they were saying, “Well, it was lovely seeing you and Amanda getting together. When she put up that thing on her blog about her getting that UTI, I knew you guys were having lots of sex!” My palm met my face, and I’m just going, “Oh, nooooooo, no! No! This is way outside my comfort zone! This is not something I ever wanted to know that people were thinking.”

Among your comic-writing peers, Grant Morrison has openly talked about drugs influencing his work and Allan Moore clearly has his occult thing.  Where does your inspiration come from?
Tea. Ridiculous quantities of tea. I’m such rubbish at everything. My wife, Amanda, describes me on occasion as a problem drinker, because halfway through my second glass of wine I go to sleep, and she’s like, “No! You’re meant to come alive and be loud and boisterous!” And I try, I just – that second glass puts me to sleep. And it’s been that way since I turned 30.  It’s not like this terrible aging thing.  I’m just rubbish.

It’s been said that you’re the rock star of comic books.  Did you ever thing that was a possibility?
It’s sort of like that moment in the first Muppets movie where they pick up a hitchhiking Gonzo, and they say to him, “What are you doing?”  And he says, “I’m going to Bombay India to become a rich and successful movie star.” And they say, “Why don’t you come with us?  We’re going to Hollywood to become rich and famous movies stars.”  And he looks at them and says, “Oh yeah. If you want to do it the easy way.” There’s something pretty gonzo about my entire career.

How so?
People go, “Well obviously you did this and you did that and you had Sandman and the novels and you’re a rockstar!” And you’re kind of going, “I just wanted to write comics and do my stuff,” and all the other stuff is fun I guess.  I’m really done with it.

So what motivates you at this point in your career?
There are too many stories I’ve not told. 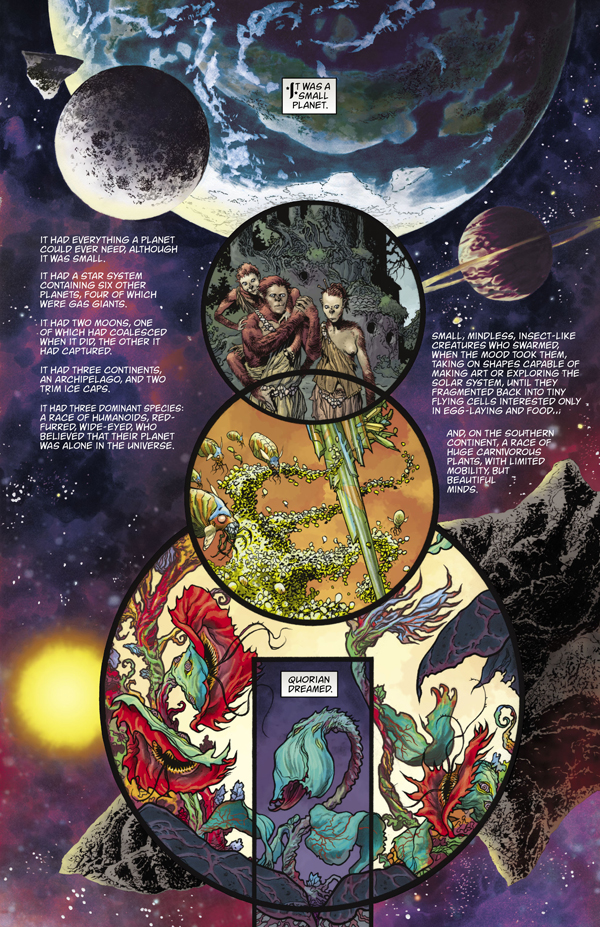