Halfway through our tour of the Museum of Weed, an interactive cannabis education hub that opened in Los Angeles this month, things started to get a little, well, heady. As Weedmaps’ Madeline Donegan, the executive director of the museum, passed us through an exhibit detailing California’s Compassionate Use Act and its impact on cannabis use to treat HIV/AIDS in the 1990s, a leopard print-clad influencer climbed into the rickety hospital bed that had been set up to recall the makeshift emergency rooms where AIDS patients were once treated, and began snapping photos of herself on her phone. Far removed from the once-perilous nature of the AIDS epidemic, the hospital room was treating an SOS of a different sort on this night: should an issue as complex and nuanced as the legalization of cannabis be made “cool” and “palatable” for today’s selfie generation?

Therein lies the main dilemma for the Museum of Weed, which seeks to trace the story of cannabis legalization through the years, from pre-prohibition uses of hemp and the counterculture revolution of the 1960s, to the current use of marijuana in medical research. With cannabis now legal in 11 states, including California where the museum resides, the once-fraught journey to get to where we are today is often skipped over, replaced by bright and cheery “Apple stores” of weed and flashy billboards that tell us what life is like with cannabis — but not what life was like before it was legalized.

The museum, which took over a 30,000-square-foot warehouse space in Hollywood, hopes to change that. The space features seven exhibits in total, each offering an interactive walk-through of important milestones and markers in the legalization journey. An eighth section, dubbed the “Plant Lab,” lets visitors get up close and personal with various strains of cannabis and different parts of the plant, exploring everything from cannabinoids to terpenes and their accompanying effects on the mind and body. The museum also houses a full cafe and gift shop, though actual sales and consumption of cannabis is prohibited. 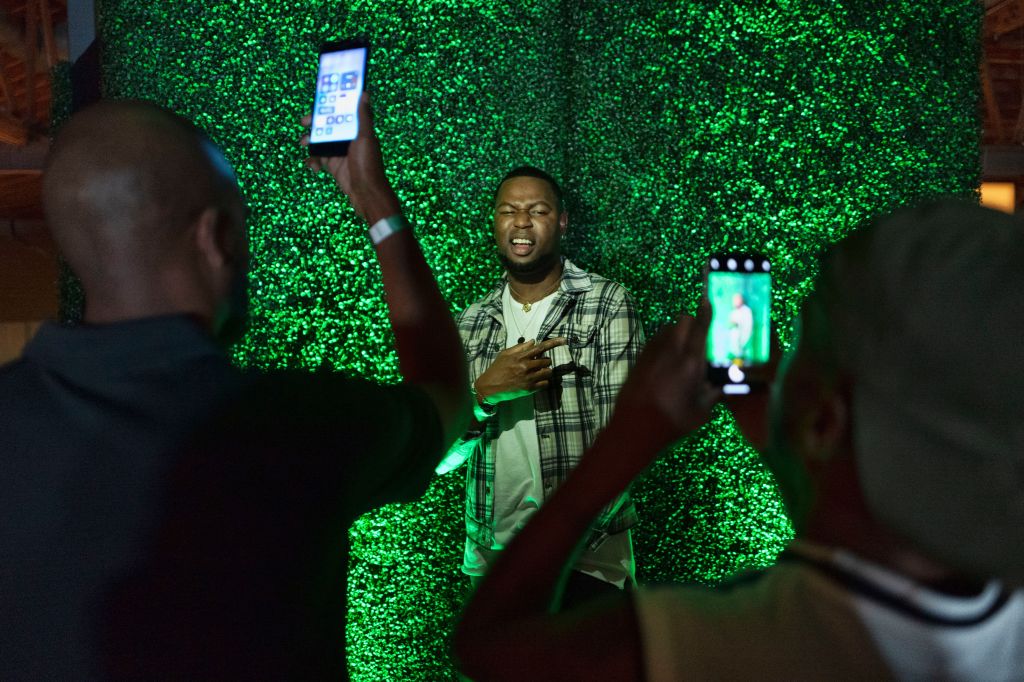 The space is the brainchild of the cannabis resource site and directory, Weedmaps, whose CEO says the goal is to use the museum as a conversation starter, to start changing the long-held perceptions and stereotypes surrounding weed.

“We wanted something that could reach a much broader audience to give them a deeper understanding of cannabis and the benefits it can provide,” says Chris Beals. “We not only want to grab people who are cannabis connoisseurs, but also people who are ‘cana-curious.'”

Exactly who Weedmaps is reaching out to, though, remains unclear. The museum opened the first weekend of August with a splashy launch party attended by red carpet-types like Ashlee Simpson and Vanessa Hudgens (Tommy Chong was there too because, duh). Saturday nights, in the meantime, are reserved for “VIP” guests (read: influencers) who get free reign of the space while enjoying an open bar, free food, and a live DJ.

On the night we checked out the museum, most of the guests made a quick walk-through of the exhibits before settling into the bar area, where the DJ spun late 1990s and early 2000s hip-hop (sadly, no Afroman, which seemed like a missed opportunity) and servers in marijuana leaf T-shirts passed out bites from what a press rep called, a “munchie chic” cafe. 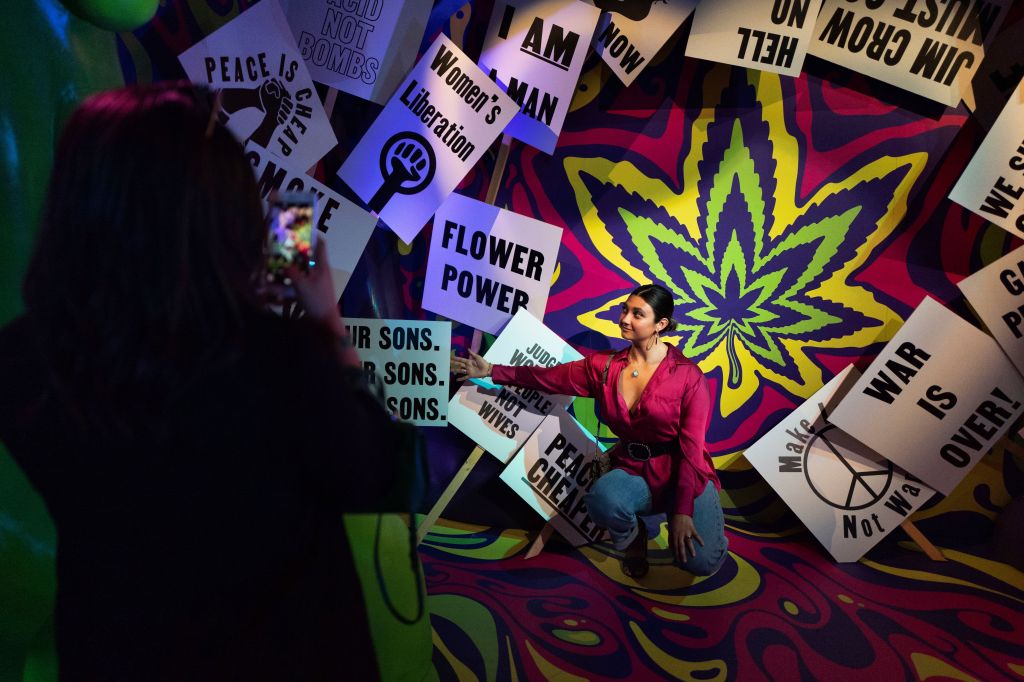 Those who did spend time in the exhibits flocked to the trippy and colorful “counterculture revolution” space for photos in front of a psychedelic marijuana leaf, whose fuzzy optical illusion of an outline made guests spin even without being under the influence. Others posed in the “90s stoner” room, alongside orange lava lamps and requisite posters of Dazed and Confused, and Half Baked. An “Entrapment” room detailed how government-driven propaganda during the Reagan years led to the systematic mass incarceration of minorities — but it also had Ikea-cized posters from the Republican president’s “War on Drugs.” Still, organizers say it’s not just about the photo ops.

While there are fun social media moments to be had, Beals says the exhibits also take a hard-lined view at how cannabis has often been politicized, showing how the AIDS epidemic drove California’s ballot measure to legalize medical marijuana, for example, and re-examining the motives behind Nixon’s introduction of the DEA.

While the push to legalize cannabis continues at the political level (Illinois became the latest state to legalize marijuana in June) Beals says there are also a number of social issues and criminal issues that have not been addressed — something he hopes the museum can help with. “We want to take the time talk about the effects cannabis can have on certain social and racial groups,” he says. “Certainly there’s a nostalgic element to marijuana, but there are also a lot of folks who are still in prison serving sentences for cannabis crime — and that’s a problem.” 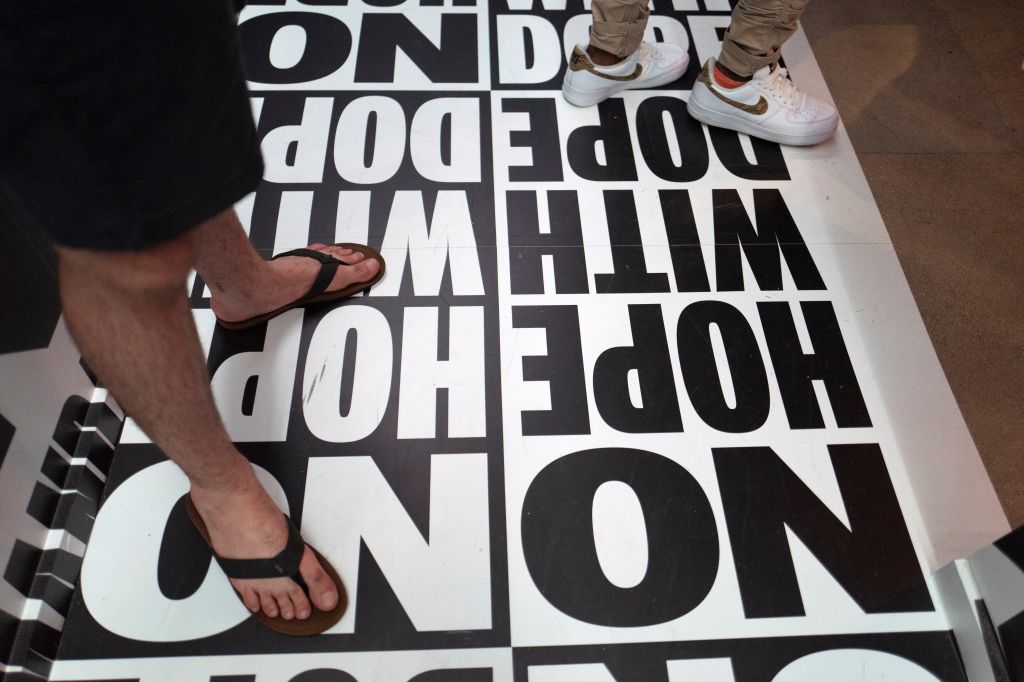 The museum is open through the end of October in Los Angeles. After that, Beals says there are plans to take the show on the road, with the team looking at locations in New York City, but also places that have taken more regressive views towards cannabis, including cities like Texas (where recreation use of cannabis is illegal) and Oklahoma (where a bill to legalize cannabis for medical use was just passed last year).

“I think the mainstream understanding of cannabis has shifted, but we’re still in the early stages,” Beals says. “For folks who grew up in the Eighties and Nineties, we’re still subconsciously conditioned to ‘say no to drugs’ and it takes time to shake that off.”

“Still,” Beals counters, “well over half of Americans approve of legalization, so approval is there and sentiments are changing.”

As for people who chalk the interactive gallery up to just another “Instagram museum,” Beals says he’s hoping visitors can look beyond the colorful displays and photo ops to find something a little more meaningful. “There are definitely some fun Instagrammable moments because the history is so colorful, but it’s such a serious topic that it does deserve some serious treatment too, given the context.”

Whether that message resonates with the audience is another story. As we were winding down our tour with Donegan, a crop-topped girl with long extensions was playing around with a display that demonstrates how different terpenes mix with THC and CBD to create different effects on mood and brain function. Her friend stood nearby live streaming their interactions to social media.

“This exhibit is meant to be a visual representation of how your brain and body reacts to different compounds and strains of cannabis,” Donegan began to explain. “Are you familiar with terpenes and the difference between THC and CBD?” she asked.

“No,” the girl with extensions replied, “but I think this is all really super cool.”