Bassist Matt Dresdner still remembers the first time he heard Mia Zapata sing, a few months before they started their band the Gits. It was in the spring of 1986 at an open mic event on the campus of Ohio’s Antioch College, where he and Zapata were going to school. “A bunch of students took turns getting up on stage and played their songs,” he tells Rolling Stone. “To me, everything sounded like Joan Baez or Phish. Then there was Mia. I don’t remember what song she opened with, maybe Bessie Smith, maybe something she wrote. Whatever it was, I was transfixed and overcome. I cried. It was raw, honest, to the bone and from the heart. No music or musician had ever affected me like she did that night.”

A charismatic and fiery performer, Mia Zapata had that effect on many people as the lead singer of the Gits. Emerging out of the Seattle music scene in the early 1990s, the Gits were known for their furious yet cerebral punk rock. With extensive touring on the West Coast touring and an indie debut album under their belts, the Gits at the time seem poised for greater exposure with national tour dates planned and a new record in the works. However, that momentum came to a tragic halt when on the early morning of July 7th, 1993, Zapata’s body was found on a deserted street; she had been assaulted, raped and murdered at the age of 27. Despite much media attention, Zapata’s murder was unsolved for almost a decade until her killer was finally found and convicted in 2004.

Twenty-five years after the crime, Zapata’s life and death still resonates with her close friends who describe her as talented, funny and caring. “I considered her my best friend,” says former Gits guitarist Andy Kessler. “She was really kindhearted and very empathic. It may have seemed to other people that she was not necessarily that way, but if you knew her then, she was really like that.”

Born on August 25th, 1965, Mia Katherine Zapata grew up in an upper-middle-class suburb in Louisville, Kentucky; her parents were media executives. According to the 2005 documentary, The Gits, her father Richard Zapata remembered her daughter as very shy and “the last person in the world who would call attention to herself.” In the fall of 1986, she formed the Gits with Dresdner, Kessler and drummer Steve Moriarty, all of them students at Antioch College. “She was always doing something, whether it was painting, sculpture, drawing or writing,” says Moriarty. “One thing she told me in college was how cathartic it could be to express yourself honestly through art, and that it was okay to express powerful emotions in songs.”

The Gits made an impression on fellow Antioch student Valerie Agnew, who later co-founded the Seattle punk band 7 Year Bitch. “Most good performers make you feel like they’re singing to you or understand your pain,” Agnew says. “That was [Mia’s] gift.”

In 1989, the Gits left Ohio and headed to Seattle, moving into a rundown home they dubbed The Rathouse. More than being the Gits’ practice space, the house was the center of a thriving music community that included acts like 7 Year Bitch and D.C. Beggars. “We didn’t fit in when we got there,” Moriarty recalls of those early years in Seattle. “So we had to form our own scene, play our own shows. I think we would’ve liked to have the attention of a record label and be one of the cool kids on the block. But we weren’t. We had to forge our own path.”

The Gits played played everywhere along the West Coast, sharing bills with Nirvana, Sublime, Beck and Green Day; they also toured Europe in 1991. The following year, the Gits independently released their debut album, Frenching the Bully, which made a little splash locally, according to Dresdner. By 1993, the Gits were finishing their second album and were slated to play their first-ever gig in New York City; as recalled in The Gits documentary, Atlantic Records made an offer to sign the Gits.“The band was getting better and better,” says Kessler. “The live shows seemed to be getting more and more intense. It was continually moving upward.” 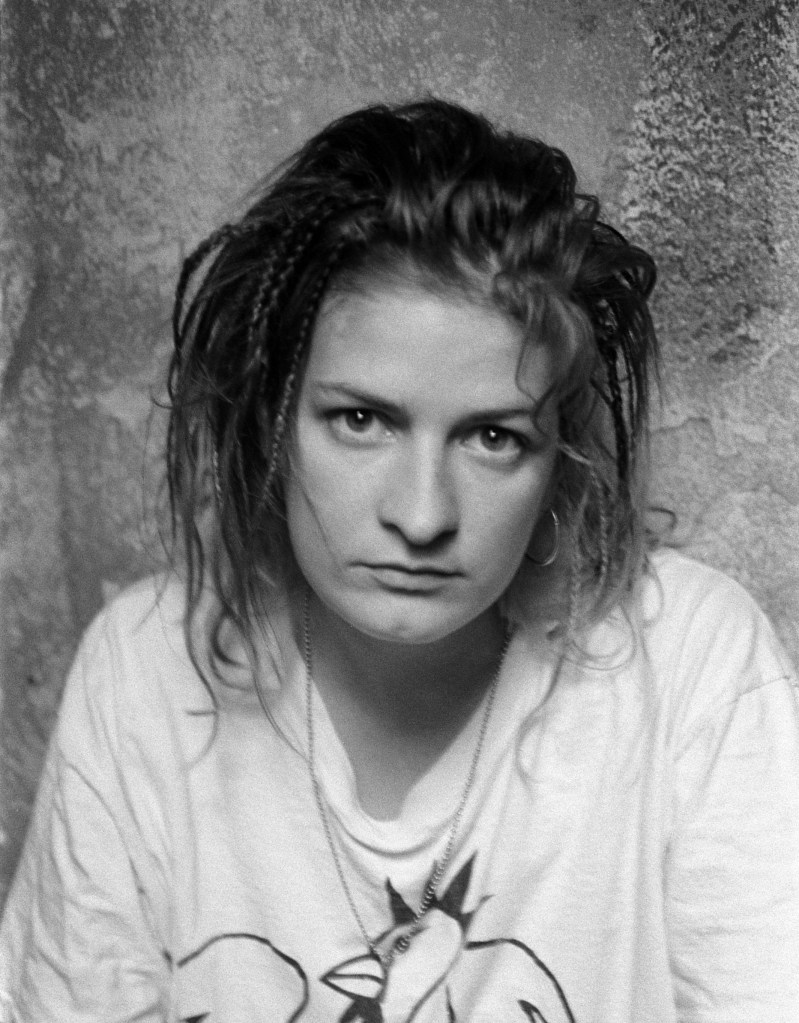 On the evening of July 6th, 1993, Zapata was out drinking with her friends at the Comet Tavern in Seattle’s Capitol Hill area; her friend Agnew recalls Zapata being in good spirits after she recently performed a solo show in Los Angeles. Zapata reportedly left the bar around midnight to look for her former boyfriend, Robert Jenkins, at a rehearsal space located in an apartment building about a block away from the bar. When he wasn’t present, Zapata went to a friend’s apartment in that same building, where she stayed until about 2 a.m. It was the last time she was seen alive.

It’s not known what Zapata did for the 80 minutes after she left the building; she may have either walked to a taxi stand or went to find Jenkins at another house. Then around 3:20 a.m., a prostitute walking in the Central Area, almost two miles from the Comet, noticed Zapata’s body lying on a deserted street. Efforts by medics to revive the singer were unsuccessful. It was later discovered that she was raped and strangled to death with the cords of a Gits sweatshirt she was wearing.

When Zapata didn’t show up for a recording session at the studio later that morning, concerned friends contacted the hospital and then the police. “Then somebody had the nerve to call the morgue,” Moriarty recalls. “And the M.E., who was a music fan and had seen the Gits, says, ‘It’s your singer. I’m sorry. You should get someone to come down and identify her.’ It was a lifelong traumatic moment.”

Zapata’s wake was held in Seattle, and she was buried in her hometown of Louisville, Kentucky. The shocking murder shattered the innocence and carefree vibe of the Seattle music community. “Mia’s murder put an unbreakable pall on our tight-knit community,” Dresdner says. “There was definitely a sense of fear and suspicion, based largely on the fact the police had no leads to find her murderer. I felt like everyone was coming up with theories and conspiracies about who killed Mia, with a lot of our close friends becoming suspects of SPD [Seattle Police Department] and/or the community. It sucked.”

Other than the drawstrings from Zapata’s sweatshirt as the murder weapon, there were no visible clues from the crime scene, including fingerprints and perpetrator blood or semen. And with no eyewitnesses who came forward, the case challenged investigators. “There was simply was not a lot of evidence at all,” says King County Judge Timothy Bradshaw, who handled the murder case as one of the prosecutors at the time. “It was every scenario we could possibly imagine. Nothing was narrowed.”

In the wake of Zapata’s murder, Agnew and other friends formed Home Alive, an organization devoted to educating women about self-defense. When it appeared to them that the case wasn’t moving forward, the surviving Gits members mounted local benefit shows with the participation of other bands to raise money to hire a private investigator; Nirvana was a special guest at one of those concerts. The other Gits also teamed with Joan Jett for some live performances and an album under the name of Evil Stig (‘Gits Live’ spelled backwards). “It was amazing to see how much support there was from a broad and unexpected swath of the music community,” says Dresdner. “We were immensely grateful to everyone who tried to help.” A benefit album, Home Alive, was released in 1996, featuring music by such artists as Nirvana, Pearl Jam and Soundgarden

While the private investigator produced notebooks full of information and evidence that were later handed over to the authorities, says Moriarty, nothing came out of it that led to the killer. And despite the publicity, the case went cold for almost a decade as Bradshaw and the Seattle homicide unit were still working on the investigation. Then a major break occurred in December 2002 when the Washington State Patrol Crime Lab ran a DNA check – based on preserved swabs of saliva collected from Zapata’s body nine years earlier – and came up with a match: Jesus Mezquia, a fisherman living in Florida. A Cuban who came to the U.S. during the 1980 Mariel boatlift, Mezquia reportedly had a criminal history that included robbery, kidnapping, and aggravated battery. His DNA sample was entered into a national databank following his conviction for possession of burglary tools. Upon further investigation, it was discovered that Mezquia lived in Seattle around the time of Zapata’s murder.

Shortly after the DNA hit, Bradshaw and the Seattle investigative team traveled to Miami and performed surveillance on Mezquia. The suspect was later detained by Florida authorities and interrogated by the Seattle investigators. Mezquia denied knowing Zapata, though he acknowledged he was in Seattle then. “He began calm and cooperative until being asked whether he raped or killed anyone in Seattle,” says Bradshaw, who notes that his first impression of Mezquia was his large physical build. “At that point he then stood, extended his arms and loudly declared, ‘See, I’m not shaking, I tell the truth.’ I filed murder first-degree charges immediately upon returning to Seattle.”

Mezquia was later extradited to Seattle to face trial. In court, Bradshaw dovetailed the facts of the case with that of Zapata’s personal character and music to the jury and spoke about the DNA evidence.

“The brilliant aspect of PCR DNA technology,” he now recalls, “is not only can you can render a profile with a minute sample, it’s also hardy. This is, for example, the technology they used to get profiles on mummies. I told the [jury] that there was no eyewitness…but there’s a new witness now and it’s that PCR result.” 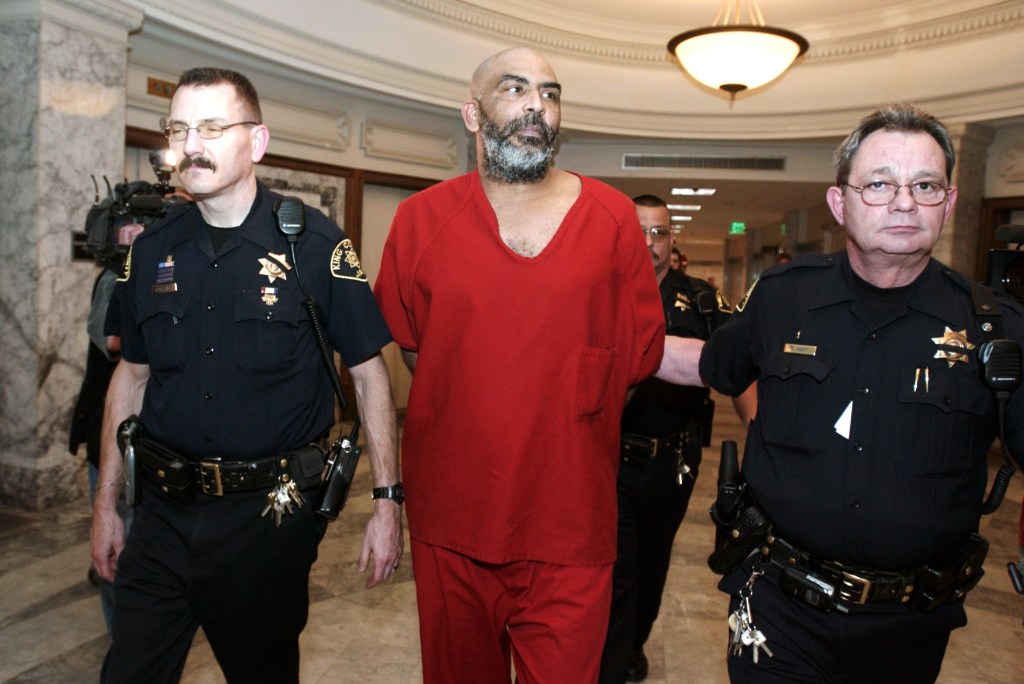 Jesus Mezquia, center, was sentenced to more than 36 years in prison for the Zapata’s rape and murder. Credit: Ron Wurzer/AP/REX Shutterstock

On March 25th, 2004, after deliberating for three days, the jury found Mezquia guilty; he was later given a stiff sentence by Judge Sharon Armstrong of 37 years in prison, exceeding the maximum amount because of the “particularly painful injuries” that Zapata suffered (An appellate court overturned that sentence in 2005, based on a previous U.S. Supreme Court decision, though Mezquia was later re-sentenced to serve approximately the same number of years). “It was very gratifying,” Bradshaw says of the guilty verdict. “The friends, family and band members who were in the courtroom – that’s what they’ve been waiting to hear. But you realize when a measure of justice has been achieved, there’s also this sadness that sets in. You realize that it’s not going to bring her back.”

The Gits’ second album, Enter: The Conquering Chicken, was released in 1994, followed by archival releases over the years. In 2015, the surviving Gits reunited for the first time in 20 years, with Rachel Flotard of Visqueen on vocals, to perform at a benefit show for Hammerbox bassist James Atkins, who had cancer before he died the following year. Even after 25 years, the death of Mia Zapata still lingers. “It’s always there,” says Moriarty, who recently launched a Kickstarter campaign for a book he is writing about Zapata. “It’ll have a major impact on my life forever. I have more faith in life, but I’m also weary and I understand darkness [in] human nature.”

Today her friends would prefer that Zapata be remembered more for her life and music than the murder. Agnew remembers Zapata’s unplugged performance of the Gits song “Social Love” that sums up who she was. “You hear her starting her song,” she says, “and then stopping, fumbling a bit, with a lot of humility, humor and bravery. Then she plays the song. She fucking devastates you because it’s awesome.