Like many Americans, Sarah Sole has complicated feelings about Hillary Clinton.

Sole wasn’t a painter yet when Clinton appeared to her in a dream, in 2007. “It was a sexual dream — a really good one,” she tells Rolling Stone, laughing. “I have lots of dreams [about] politicians. I had a meal with George Bush; well, I was eating, he wasn’t. I had several dreams with Obama — not sex dreams. Hillary’s the only one I had a sex dream of.”

The next morning she began work on “Pink Hillary,” painted from a photo that ran on the front page of the New York Times of then Sen. Clinton standing next to Chuck Schumer, wearing a startled look on her face.

Sole has characterized her fixation on Clinton as “libidinal,” but, she says, “when I think of libidinal drive for a politician, I think of Shepard Fairey’s HOPE poster, and all of the man-love for Obama.”

To her mind, the chief difference between herself and once-ardent, now disillusioned Obama supporters like Fairey is the fact that her feelings about Clinton are conflicted.

People like Fairey “would project the most sublime, personable, personal aspirations [onto Obama]. He was pure, he was wonderful, and so of course they’re going to be disappointed,” Sole says. “I don’t do that with Hillary. I like Hillary’s impurities.” 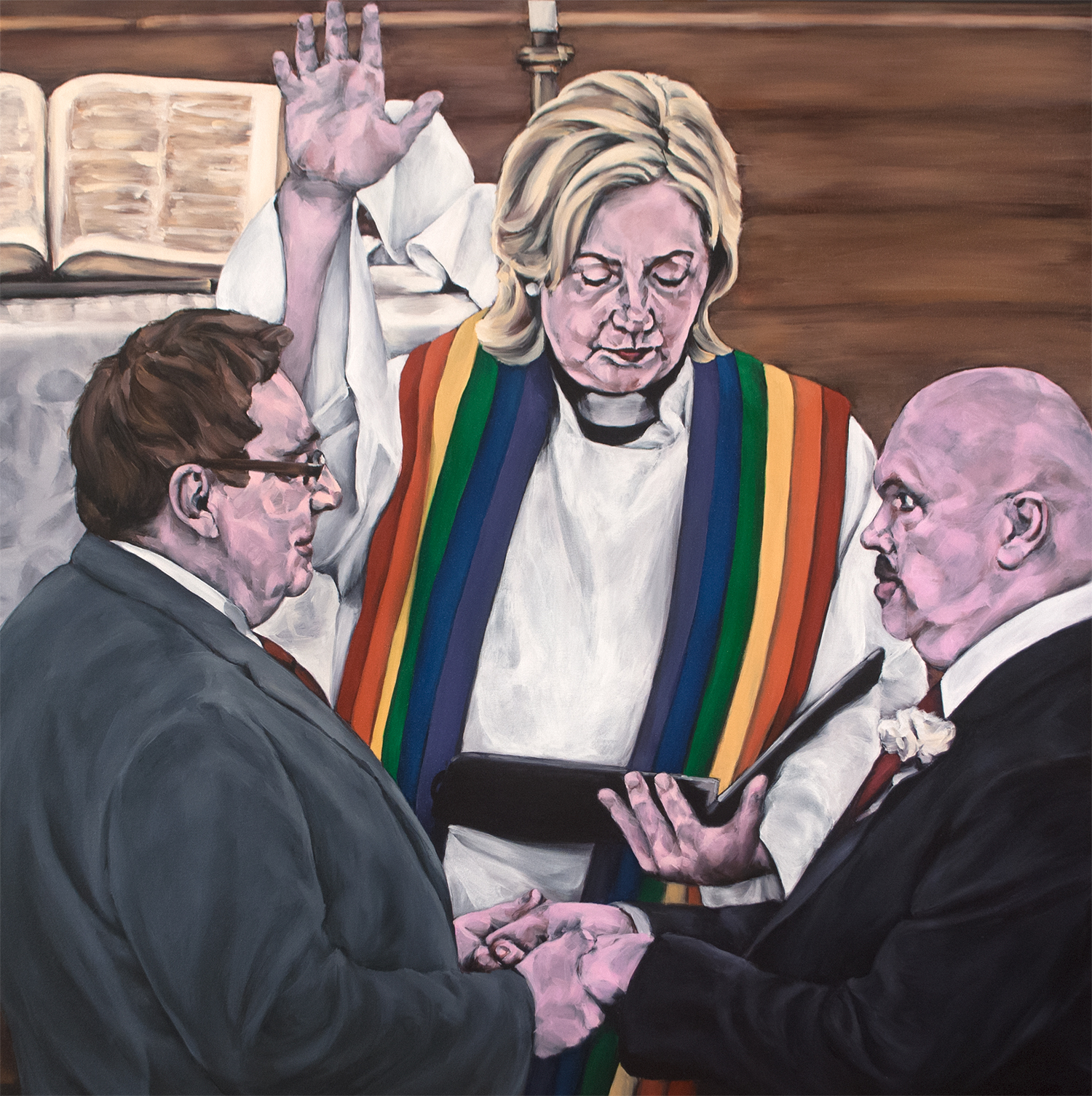 If Obama was the blank canvas onto which voters projected their hopes in 2008, Clinton is a million images laid over one another, any of which might be seized upon by supporters like Sole, or detractors like Doug Henwood, the author of My Turn.

No moment has distilled that better than when Henwood’s book cover was unveiled online in October, met by an avalanche of critical tweets and ponderous think pieces. As Henwood writes in an author’s note, the cover was assailed as “gross,” “disgusting” and suggestive of his own deeper “issues with women.”

Sole explains that the painting, “Red Gun,” is a play on a photograph of Natalie Wood that ran in Life magazine in the Fifties. “The gun is the phallic power, it’s sexual, but it’s not eroticizing violence — it’s eroticizing the idea of women with power, phallic power,” she says.

To Sole, it’s sexy. The sexiness of Hillary Clinton was what drew her in. “I just like her swagger. She’s got something very butch about her that I like. Part of the delight of Hillary was that I was attracted to her, physically,” she says. “And it was fun playing with that, even if I didn’t paint well enough to make her into a beautiful woman.”

Before she was painter, Sole was a mathematician. She grew up in New Orleans, and attended Rice University in Houston; she got a Ph.D. and did a post-doc, then snagged a tenure-track position at Wayne State University in Detroit. Sole spent a lot of time as the only woman in a room full of men, and she observed the dynamics in those rooms, before chucking it all and moving to New York to become an artist.

Her experience in academia informed her feelings about the election. “Politics and power dynamics between just men tends to be pretty predictable and shallow. Once you put women in the mix, things change,” Sole says. “If a woman has a lot of conviction, and she has vision, and she has courage, then she can go in and really rock the boat. I’m not saying Hillary is that woman. I have no idea about her vision. I actually have doubts. But I don’t doubt her courage.”

Like Clinton’s positions, Sole’s feelings toward her have shifted over time. For instance, Sole, a lesbian, is not bothered by the amount of time it took Hillary to reverse her position on same-sex marriage.

“There’s no doubt, to me, that she privately supported it, and was just waiting for the right time, to avoid the backlash,” she says. “And that’s a political calculation that I totally understand, don’t have a problem with.” 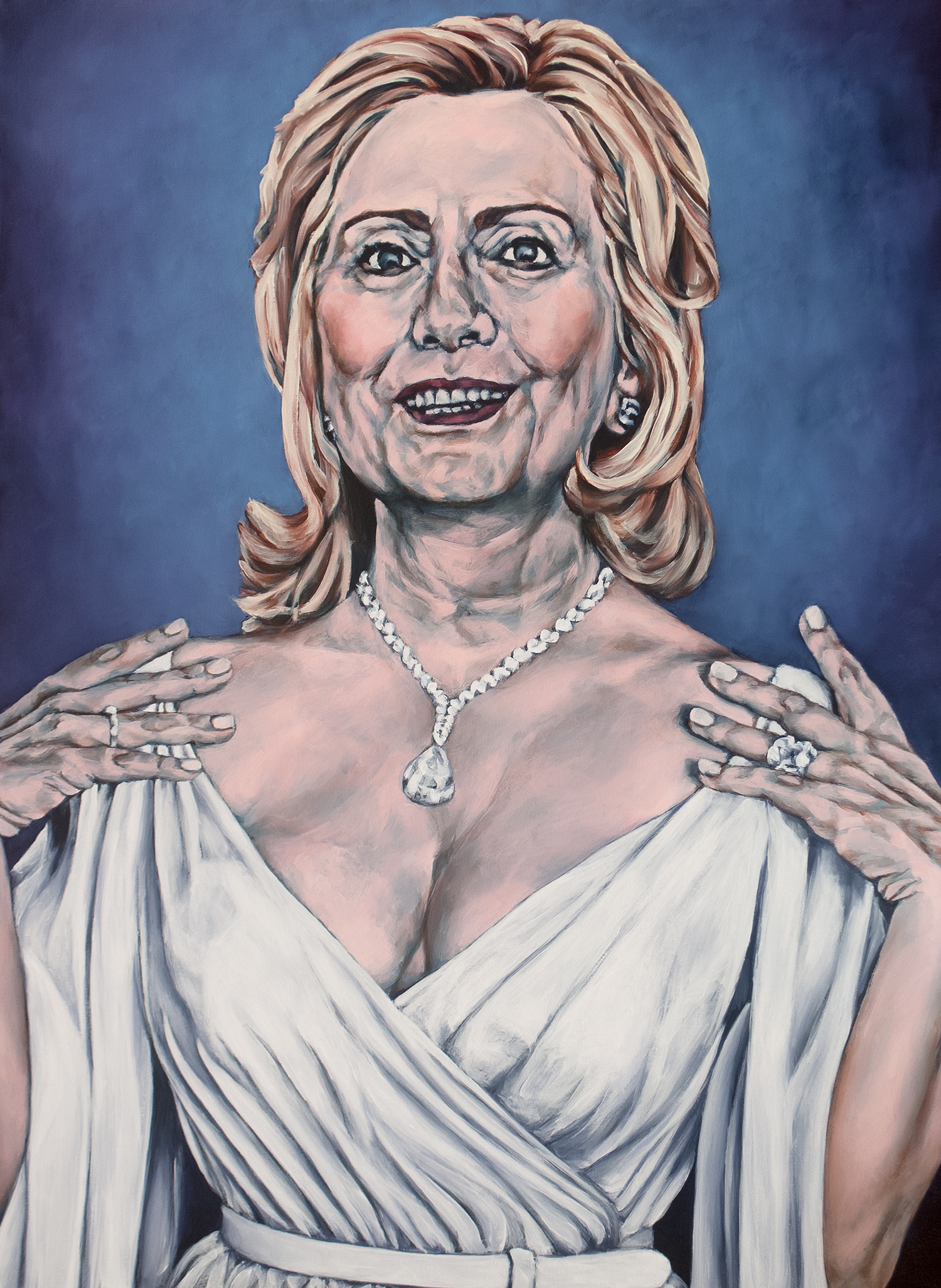 More troubling to her was the experience of watching Clinton as secretary of state during the Arab Spring. She recalls having a visceral reaction to the viral video of Clinton gloating about Qaddafi’s death. “I got to see her bloodlust on display,” Sole says. “It was repugnant. Absolutely repugnant.”

In 2010, Sole destroyed an original painting called “The Long Goodbye” that depicts her and Clinton locked in a kiss. “I tore that up in a fit of passion,” she says. At the time she was having “major doubt about what the fuck I was doing,” in art and in life more generally.

Sole’s “period of idealization” ended around that time, but her support for Clinton hasn’t wavered. That’s both Sole’s point, and her main criticism of Henwood’s book.

“I have no problem with a critique of Hillary based on her past actions,” Sole says. But she notes that Clinton has also expanded health care for children, and extended domestic partner benefits to Department of State employees. “She has done good things. Let’s not leave that out of the book.”

Sole had another dream about Clinton recently. In this one, Clinton is leaning against a brick wall, crying softly. Sole walks up and asks if she’s OK.

“I try and hold her, and she pushes me away, she says, ‘Fuck you!’ I was like, ‘What, what? Do you know who I am? I’m the one who paints you.’ And she started laughing, she’s like, ‘Oh yeah. Oh yeah.’ And then we start walking together, and she’s like” – referring to Sole’s paintings – “‘You know, one day I’m going to have to get one of those.'”