Back in 1992, Marvel Comics made headlines by revealing that Northstar, a Canadian superhero associated with Alpha Flight and the X-Men, was gay. Twenty years later, the character is back in the news as he is set to wed his longtime partner Kyle in Astonishing X-Men #51, in stores on June 20th.

“When gay marriage became legal in New York State, it raised obvious questions since most of our heroes reside in New York State. Northstar is the first openly gay character in comics and he’s been in a longterm relationship with his partner Kyle so the big question was – how would this change his relationship?,” says Marvel Comics editor-in-chief Axel Alonso. “Our comics are always best when they respond to and reflect developments in the real world. We’ve been doing that for decades, and this is just the latest expression of that.”

As an X-Man, Northstar routinely fights against bigotry, as he is a mutant, and mutants are the most feared minority group in the Marvel Universe. Astonishing X-Men writer Marjorie Liu looked to Northstar’s relationship with Kyle as a way to write an inspiring story about characters who feel like outsiders even among outsiders. “Here are two people, trying to live their lives – mutant and gay, black and gay – empowered in their own ways, but also fringe-dwellers,” says Liu. “And they’re making it happen. They’re living life on their own terms.  It doesn’t matter that it’s a superhero comic, the message is: You can do the same thing.”

Though Northstar has been in comics since debuting in Uncanny X-Men in the late Seventies, Kyle, a regular human and not a superhero, was created more recently, so Liu has been working on fleshing out his character. “I looked at relationships between police officers, soldiers, etcetera, and their spouses,” she says. “You have, for example, one partner who is always going off into dangerous situations, whose ‘team’ at work is an important, integral, part of their lives, and then you’ve got the person left behind. Like Kyle, who has a perfectly wonderful life, a great job, but is a human man who has to watch his partner go fight aliens or giant robots, or insane supervillains at the drop of a hat, and there’s nothing he can do to help. On a bad day, he might even be a target himself. So, thinking about Kyle in those terms, empathizing with him, I’ve had to mull the strains and stresses that being with Northstar would put on him, those parts of his life that he feels are lacking, what he wants long-term that he’s afraid he can’t have, and so on.”

These tensions will inform Liu’s Astonishing X-Men stories going forward, but Alonso says the couple will also have to confront homophobia from Northstar’s teammates. “Let me make it clear – this story begins with a marriage, but it ain’t over with the marriage,” he says. “We’d be doing the story a disservice not to reflect the controversy around it. While a lot of Marvel Universe characters will be attending Northstar’s wedding, not everyone is going to accept the invitation and not everyone is going to accept the validity of Northstar’s vows. At least one of Northstar’s team members is going to turn down the invitation, and that’s going to make for an interesting dynamic.”

You can click through to check out a preview of Astonishing X-Men Number 50, in which Northstar proposes to Kyle, here. The issue, illustrated by Mike Perkins, will be in stores tomorrow. 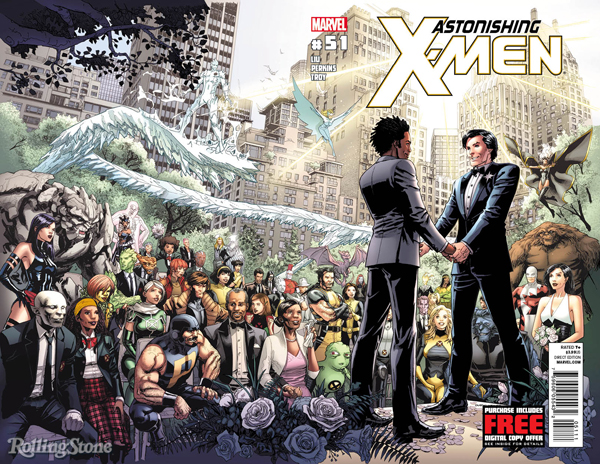