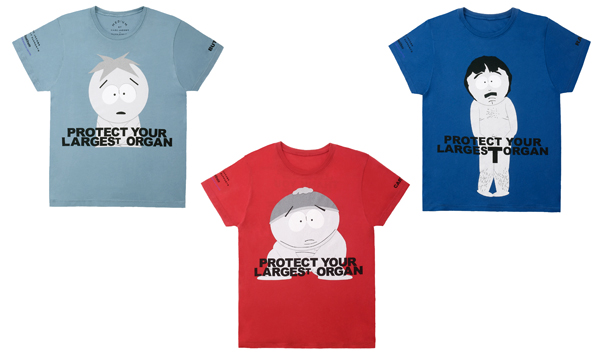 In November, Marc Jacobs became the first designer in history to be featured as a South Park character, a milestone he describes as one of the highlights of his life. “It is the greatest honor, I mean, way above and beyond the lifetime achievement award, beyond anything. To be immortalized on South Park, I can die a happy man,” he told New York.

Turns out, that surprising cameo wasn’t just playful parody but the beginning of a fruitful partnership. The designer is returning the favor to South Park creators Trey Parker and Matt Stone by choosing three of the show’s most famous characters to front his next “Protect the Skin You’re In” campaign. The initiative, which benefits the Interdisciplinary Melanoma Cooperative Group at New York University, has been fronted by Victoria Beckham, Naomi Campbell and Dita von Teese.

Eric Cartman, Randy Marsh and Butters “Leopold” Stotch appear fully nude on the shirts, with “Protect Your Largest Organ” emblazoned over the vital areas. The shirts retail for $35 online and at Marc by Marc Jacobs stores worldwide.

“Matt and Trey are just probably the two most brilliant people in the entire world, and it is definitely my favourite program on TV,” Jacobs said. “I have two of Cartman’s toys tattooed, one on each forearm – Clyde Frog and the other one is Rumpletumskin.”

Check out Marc Jacobs in doll form on South Park’s “1%” episode below: