Whereas his main line showing this week exalted beautiful decay and aging eccentricity, Marc Jacobs’ secondary line, traditionally less conceptual, was all about the young, modern and militant. Given the soundtrack – Front 242, Public Image Ltd. and the generally harsh, scrappy Eighties martial vibe it conveyed – it’s hard to imagine Jacobs’ view of Fall 2012 as anything but grim. But dressing for the apocalypse can be fun, especially with music with this aggressively good and clothes this snappy and convertible.

Red, white, black and blue – the colors that don’t run but do bleed – served as the emblematically charged palette. There were less military pea coats than you might expect, given the warlike tone to the collection. Instead, another uniform staple, drummer-boy hats (for the girls, too), served as the coalescing motif among the 58 looks. Reliably paired with bomber jackets, they also created an interesting juxtaposition when aligned with traditionally feminine attire. Even in bouclé, drop-waisted frocks, Jacobs’ youthful cast of men and women make for a fetchingly stern army. 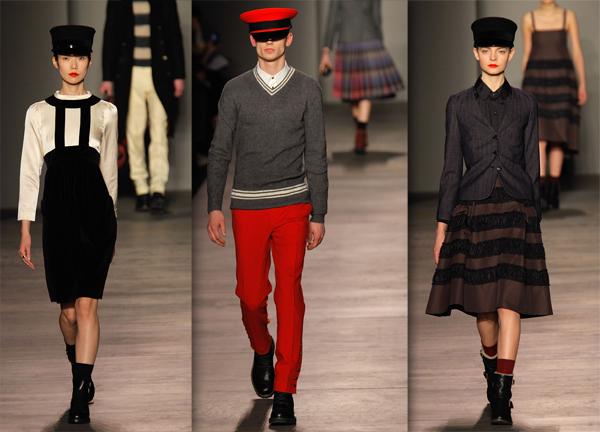