Fans of Making a Murderer might recall that one of the more damning pieces of evidence against accused murderer Steven Avery is that victim Teresa Halbach’s car was found in the Avery Salvage Yard, located on the same property as Avery’s home, where the murder allegedly occurred.

Halbach, a freelance photographer for AutoTrader, had driven her Toyota RAV4 to the property on October 31st, 2005 on assignment to photograph a van that Avery’s sister was selling. According to law enforcement, she and the RAV4 never left, because Avery – along with his nephew Brendan Dassey, who was convicted in a separate trial – raped her, murdered her and then burned her body. The RAV4, prosecutors claimed, was driven into the salvage yard, parked and then hidden near a row of trees, where it was found by two volunteer searchers on the morning of November 5th, approximately 36 hours after Halbach was reported missing.

At the time, Avery’s lawsuit over his 1985 wrongful conviction for rape — for which he served 18 years in prison — was on the brink of bankrupting Manitowoc County, Wisconsin. The former district attorney and the former sheriff were being sued as well, and a number of members of the had been deposed in the months and weeks leading up to Halbach’s disappearance. Because of this conflict of interest, on November 5th, a judge decided that Manitowoc County Sheriff’s Department (MCSD) was not to be involved in the investigation, instead handing the it over to the Calumet County Sheriff’s Office (CCSO), the agency that had first received the missing persons call about Hallbach.

Yet despite this attempt at separation, some MCSD officers continued to chip in on the case, though they were in theory supposed to be accompanied by CCSO officers. Their involvement, however, led Avery, his family and his attorneys to believe that MCSD police planted evidence – including his blood, the RAV4 key and maybe even the car itself – in order to frame Avery. (Police and prosecutors have long denied such accusations, and have accused the documentary series of unfairly presenting their actions and the case. CCSO did not return a request for comment for this story.)

The fact that Halbach’s car was discovered in the Avery Salvage Yard is indisputable, but how and when it got there has been a subject of contention. According to an article by freelance photojournalist and writer Jeff Klassen, someone with answers may have been around all along – living just 1,400 feet from where Halbach’s car was found.

Wilmer Siebert has lived near the salvage yard since the 1970s, near the entrance to the quarry road that runs behind the Avery property. There used to be an entrance to the rear of the Avery Salvage Yard down the road from his house. (This entrance, like several others, has since been blocked off, though the Avery family confirmed to Rolling Stone that those entrances were accessible in 2005.) Siebert told Klassen that he’s not interested in the attention associated with this case, but like many others, the documentary made him ask questions. And while he knows the Averys casually, there doesn’t seem to be a close personal relationship. In other words, Siebert seemingly has no reason to lie, though the veracity of what he remembers is another thing entirely.

Klassen interviewed Siebert, now in his 70s, on a recent visit to Manitowoc County; for the first time, Siebert spoke publicly about two separate incidents he says he witnessed in early November 2005. Siebert claimed that in early November, “days” before Halbach’s car was found in the Avery lot, he was sitting in his backyard and saw what he believes was a RAV4 driving down the quarry road, followed closely by a white Jeep. While he admitted to Klassen that he couldn’t be 100 percent certain it was her car, he remembers this vehicle was the same blue-green color as Halbach’s, and he hadn’t seen many RAV4s at the time, so the vehicle stuck out to him. The cars were going about 40 miles an hour, he said – faster than the usual for the road – though he wasn’t able to see who was driving either vehicle. Siebert explained that he saw the two cars headed up the road and out of sight, then, about a half-hour later, the white Jeep came back down the road alone. “Shortly after,” he said, “the lady found the car back there.” 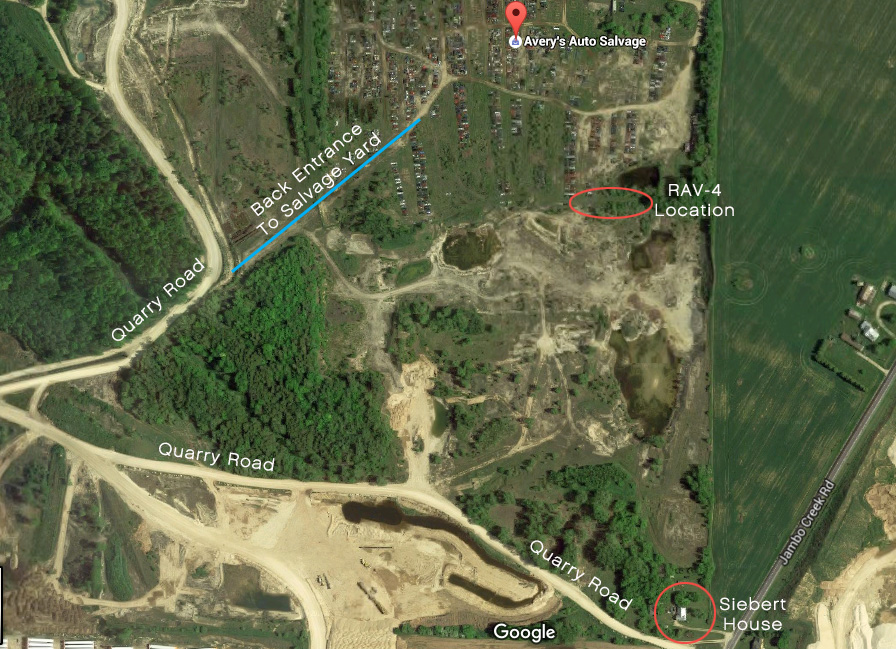 Siebert is referring to volunteer searcher Pamela Sturm, who, along with her daughter, discovered the RAV4 after searching the salvage yard for less than 30 minutes on the morning of November 5th, 2005. The lot is nearly 40 acres, and at the time there were nearly 4,000 cars. Halbach’s RAV4 was tucked near a patch of trees, about 1,000 feet from the main entrance where Sturm and her daughter began their search on foot.

“I needed a gas tank for a truck [once] and they gave me the row [that it was in] and what kind of truck it was and I didn’t find that truck in that short of a time,” said Siebert. “I don’t know how [the search party] could find that car that quick.” (“God showed us the way,” was how Sturm, a former private investigator and Halbach’s second cousin, explained it at Avery’s trial.)

If the blue-green car Siebert saw on the quarry road was indeed Halbach’s RAV4, that means the car left the property on or after October 31st. A CCSO flyover search of the Avery property conducted on the afternoon of November 4 found nothing, so this would mean that either the RAV4 and the white Jeep drove the car into the salvage yard and parked it there that evening or night, or it was parked somewhere else off the quarry road on an earlier date and then moved.

We know where Halbach’s RAV4 ended up, but what about the white Jeep? Critics of Siebert’s tale have pointed out that the “white Jeep” might, in fact, have been a light silver Suzuki owned by the Averys. On Reddit, where Avery’s guilt or innocence continues to be a hot topic, people have parsed how likely it would be to confuse a Suzuki for a Jeep, and whether, in certain lighting, silver could be perceived as white. Could what Siebert saw actually be point toward Avery’s guilt?

According to Carla Chase – Avery’s niece, Dassey’s cousin, and de facto spokesperson for the Avery family – the silver Suzuki was always kept up at the family’s cabin in Crivitz, Wisconsin – the same place Avery was when the RAV4 was found. “It was up in Crivitz all that time,” Chase tells Rolling Stone of the silver Suzuki, disputing the suggestion that it could have been the car Siebert saw on the quarry road. “It’s not licensed for the road. Al [Allen Avery, Steven Avery’s father] usually used it going back and forth to the neighbors’ in Crivitz and down to get the mail and stuff like that — it was a trot around vehicle for up at that property.”

Wilmer Siebert shared one other potentially troubling anecdote with Klassen from shortly after the murder investigation had begun. Police working the investigation – which, as seen in Making a Murderer, could have been from either CCSD, who were leading the investigation, or MCSD, who volunteered their own officer to help – barricaded the entrance and blocked off the section of the quarry road that goes in the direction of the Avery Salvage Yard, and Siebert said that the police asked for a heads up if he happened to see anyone trying to get past the barricades.

Late one night, Siebert told Klassen, he saw two MCSD vehicles driving past the barricade and into the Avery property alone. He asked his daughter Victoria to call the local police to alert them to the fact that someone had crossed the barricades; she did, and was told there was nothing to worry about. (Victoria Siebert confirmed the call to Klassen, and a dispatcher discussing the call can be heard on YouTube.)

Siebert told Klassen that a day after his daughter made that call, they heard on the news say that Halbach’s car key had been found on the Avery property. According to police, the key was found on November 8th, so if Siebert’s memory is accurate, he saw the cars drive past the barricade the night of the 7th. (Unfortunately, like so many pieces of evidence in the case, the calls to dispatch don’t have dates or time stamps for corroboration.) Siebert’s claim of seeing MCSD police driving onto the Avery property after November 5 would be an example of officers ignoring the judge’s orders to hand off the case, going onto the property and being involved in the recovery of the initial physical evidence linking Avery to Halbach’s murder – the car (November 5th), the key (November 8th) and the burned remains (between November 6th and 7th) – was found.

Only once during the police investigation, Siebert told Klasson, was he questioned by law enforcement – he says an FBI agent came by with a picture of Halbach and asked if he had seen her. He hadn’t. No one ever asked him directly about the RAV4, and he never thought to tell anyone. It wasn’t a complete secret, though; Siebert reportedly told his daughter, and at some point, the anecdote made it’s way back to the Avery family.

“The family had heard years ago that Siebert had supposedly saw two vehicles going in,” Chase says. “I know that Dolores had heard that he had come forward years ago, but when it was, I’m not positive. The family had gotten lots of little tips over the years, but it didn’t matter what was said because of course they didn’t believe the family, you know?”

Dean Strang and Jerry Buting embarked on a nationwide tour to discuss the Avery case and the surrounding issues. Watch here.