Next month, Santigold will release her latest project: a new, limited edition makeup collaboration with Smashbox Cosmetics, which features brightly colored eye palettes, snaky nail strips, gilded lip glosses and a magical Swarovski snake ring with a tiny mirror and lipstick inside. Inspired by the 2012 apocalypse and featuring original collage art designed entirely by Santi White herself, the collabo is Smashbox’s first with a musician. We spoke with Santigold by phone about the process of making her Smashbox collaboration and new projects (like a baby, which is due very soon!).

You’ve said that you chose the palette based on shades that could work on every skin tone. What was the process of doing that?
Lori Taylor Davis, Smashbox’s head makeup person, and I went to all these different places and bought and played in makeup all day. Then I said, OK, these are the colors that I’m interested in. They were like, “Well, we want something a little more wearable.” Like, what is wearability? That was the big question at hand, because it’s such a subjective question. There were a lot of different people on their team, and most were white except for me and Lori, who’s really light skinned. But everybody had different skin tones, like olive, some were pale, some were like, L.A. tan. So we had a good range of skin tones there. They wanted something neutral in each palette, so you could take it from having just a little shimmer to having something really powerful and strong. We all tried them to see which colors looked best with different skin tones, and I took that into consideration when choosing the final colors.

You had said that you need a deeper pigment onstage.
I just find that a lot of times with makeup what you see is not actually what you get, color-wise. Something will look great on a pencil but once you put it on, it’s disappointing, whether it’s the texture or the color. I want the color to look like it does on the package! Especially for onstage because I like my makeup to really carry from far away, whether it’s the people up front or, sometimes you’re on the jumbotron, and they come really close up on your face and you wanna have something pop so people in the way back can see what you’ve got goin’ on! I like colors that are part of the costume and part of the creative statement of the look onstage. And of course, we do a workout up there so we’re sweating the whole time, so we need something that actually stays. That’s been really important in choosing my makeup. I was like, I wanna make something that’s everyday, a pencil, easy. I was using a liquid eyeliner that you would literally have to wait five minutes for it to dry. So I was like, wouldn’t it be great if you had a pencil that looked that rich, that wet, and the color would stay that long, but it’s quick?

You also designed all the packaging. You were inspired by the Mayan Apocalypse?
Not exactly! We started this project in 2012 sometime and, you know, I’m always super into mythological tales of anything, and I found all this really interesting information about post-2012. Everybody was talking to me about oh, “the end of the world,” and I was like OK, but what really is it about? But all these ancient cultures were saying these things about 2012, not just the Mayans, where there was gonna be a big change on the earth. So I started doing more research, and there’s all kinds of stuff, Native American theories, especially the Hopi Indians, and a lot of it was about returning to this “golden age,” a post-apocalyptic golden age, where instead of everything being destroyed, balance is actually restored and the earth gets renewed. I thought that was a really beautiful and interesting idea, especially since everyone was going on and on about the destruction and end of the world.

Also, I’m really into like, aliens and stuff. So you think about the future and the balance, I think about coming to terms with the rest of the universe and the galaxies, so I was like, well obviously, aliens have to come! [Laughs] So I put that into some of the make-up names in a silly way, like the “Green Martian” eyeliner, or “El Dorado” is the name of the gold eyeliner. There’s also a snake deity that returns and is the symbol of this restored balance, and I thought that was a beautiful image that I could put into the artwork. 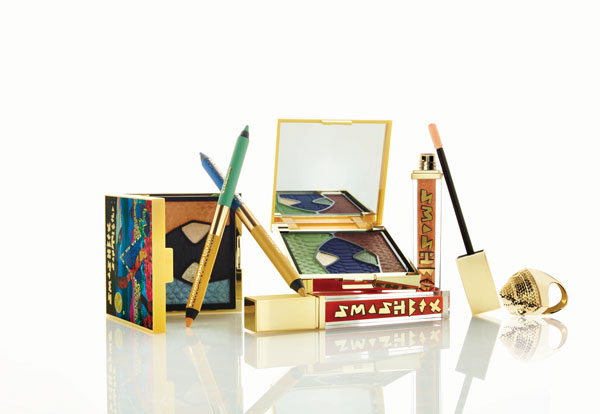 How did you make the artwork, did you do papercuts?
I did! I love doing collages, and it was really important to me to make it. In doing so you have to use some of your own pictures from life things, so the horizon is an actual picture I took at the top of Kilimanjaro. Everything in there is something from [my life], you know, a piece of fabric from one of my costumes or an old pyramid pencil sharpener I found in my house. It was really cool to piece it together because it was personal.

You’re kind of on a roll with collabos — you also just did a sock collection with Stance socks. Anything else coming up?
I have lots of ideas and things in the works but those are the only two.

And you’re about to have a baby!
That’s my latest collabo! I’ve never done it before but I’m getting really close, and it’s been a really exciting and fun experience so far.

Is it true that when you’re pregnant your creative juices are heightened?
Mmm, I don’t know! I think it just depends on what you have to get done! It’s been a really hectic time and there’s a lot of racing the clock to be productive. I’m sure it’s different for everybody and depends on the circumstances.

Are you working on new music?
I have been, yeah! It’s not as fast as it would be if I was just doing that, but I have been constantly doing music as well. It’s just such a different world than I started out in, musically, because now you do everything so fast and people need songs for this movie and this TV show and this commercial, and sometimes making music becomes this job, so it’s nice to have new outlets that you’ve never done before so that the creative process always feels fresh. Which is why I started doing some acting last year too [on The Office and Adult Swim], I just wanted to keep challenging myself. Not to say that music isn’t challenging, but sometimes if you don’t step out of it, it can feel not fresh. It’s great to do different things to create new perspectives that you can bring back to your next musical projects.