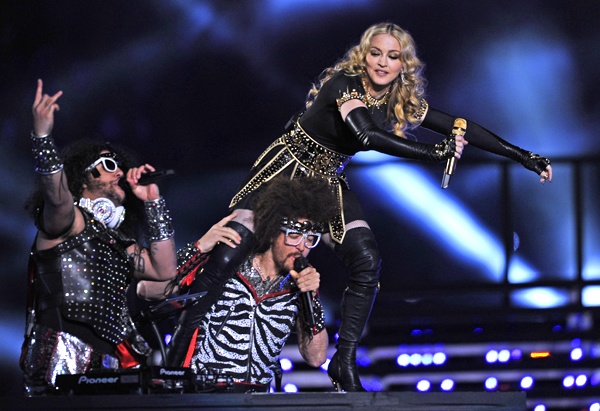 Only in Madonna‘s material world could headphones cost a million dollars. SkyBlu, one half of the party anthem-makers LMFAO, wore diamond-encrusted headphones valued at $1 million during his guest DJ appearance at the Super Bowl halftime show.

A special collaboration between Beats by Dre and London-based Graff Diamonds, the high-priced pair of headphones featured 114 carats of diamonds and were custom-built to match the extravagance of the Super Bowl show. Watch them get made in this video.

Besides the extra sparkle, SkyBlu’s pair had the same sonic technology found in all Beats by Dre headphones, which are tuned by the “million-dollar ears” of Dr. Dre and Interscope founder Jimmy Iovine, a Beats spokesperson told Rolling Stone.

For the halftime show, LMFAO remixed Madonna’s “Music” with their 21st century earworm, “Party Rock Anthem,” and joined the 53-year-old pop star on the floor to do the shufflin’.

By comparison, 50 Cent‘s new line of headphones cost only loose change. After negotiations with Sleek Audio fell through, 50 Cent created his own oversized, branded headphones. STREET by 50 cost $300 while SYNC by 50 work wirelessly for $400. The logo on the professionally tuned wireless headphones blinks every time they are synced to the transmitter.

Quick to capture the trend, Urban Outfitters also recently revealed a line of colorful and affordable headphones and earphones.