On May 13th, Doom – one of the most influential video game franchises ever – blasted back in all its bloody, heavy metal, demon-splattering glory. As the latest installment of the seminal first-person shooter, which debuted from id Software in 1993, the game’s arrival generated its usual fervor online. Gamers trashed the Open Beta in April, calling it slow and sluggish. Critics feared the worst when Bethesda, Doom‘s publisher, which acquired id in 2009, didn’t send out pre-release code for review. As gamer Hellstorm Archon posted on the forum Zandronum: “I’m just praying that this new Doom doesn’t suck.”

Fortunately, for Hellstorm and the generation who grew up on Doom, it doesn’t. Early reviews, particularly among the diehard PC gamers, have been positive. “Big arenas, lots of guns, waves of demons, and a generous helping of gibs,” as PC World put it in its four-star review, even though, as it noted at the end, “it may not be as influential as the original…”

Then again, few games are – as I chronicled in my book Masters of Doom, the story of Doom‘s original rock star co-creators, John Romero and John Carmack. The new Doom marks the first one without the participation of either of the Two Johns, who are no longer with id Software, the company they co-founded. First published in 2003, the book chronicles how Carmack and Romero rose from broken homes to create some of the most influential and controversial games of their generation. To me, it was a classic tale of gumption and innovation, and an inspirational one at that.

Reality Check: The Dizzying Rise of the Oculus Rift

So what grand new things have Carmack and Romero been up to since ? As you might expect, plenty. For Romero, the original rock star of the game industry, the past decade has been lower profile but highly productive – often in ways that many of his most ardent fans and critics might not realize.

When I last wrote about Romero, in the 2004 edition of Masters of Doom, he and id Software co-founder Tom Hall had moved to San Diego to work for Midway, creator of Mortal Kombat and other classic games. But before long he was back on his own again. In 2005, Romero moved to Silicon Valley and co-founded a new development studio, Slipgate Ironworks, a nod to the teleporters in Quake. When announcing his plans, he hit back against the gamers who still took him to task for his post-id shooter, Daikatana. “Hey, Daikatana‘s old, old news now,” he said at the time, “and the fact that everyone remembers that particular game instead of the dozens of other games I’ve made just shows how negatively slanted the media is – negativity sells.” He also hinted that gamers would likely be surprised to see what was coming from him next.

What came were massively multiplayer online games, or MMOs, a genre that was gaining popularity with the recently released World of Warcraft and had long been of interest to him. Romero folded his company into another he co-founded, Gazillion Entertainment, which struck a high-profile deal to develop MMOs for Marvel, and gobbled up Net Devil, the company behind another high-profile online brand, the Lego Universe.

Though the MMOs would have mixed success, Romero was soon pursuing new games – and a new relationship. Brenda Brathwaite was a veteran game designer, and one of the most influential women in what had long been a male-dominated industry. She and Romero had plenty in common, having seen the changes in the business over four decades.

The two began dating and, in 2010, co-designed Ravenwood Fair, a social game for Facebook – and probably the furthest game one could imagine from Romero’s most famous game, Doom. Ravenwood Fair cast the player as a warm fuzzy forest animal who had to whittle down trees and create a fair to attract other cutesy creatures – all the while warding off scary monsters in the woods. Though there were none of the bloody gibs or marauding imps that had made Romero famous, Ravenwood Fair scored big, with more than four million players its first month alone.

Romero and Brathwaite took their winning partnership further and married in 2012. The ceremony was at Disneyland on the Mark Twain ship, and officiated by Romero’s old id buddy, Hall. Brenda took Romero’s last name, and, together, they made game-making a family business. They co-founded their own company, Loot Drop, and brought Hall in to help design. Before long, the next generation of Romeros was getting in on the action too.

One day, Romero’s 10-year-old stepson, Donovan, suggested they make a game called Gunman Taco Truck. Romero arched his brow. “That’s a cool name, man!” he told the kid. They recorded Donovan making his pitch, which sounded like something Romero himself might have dreamed up at that age: It’s 2020, and you have to drive your taco truck across a post-apocalyptic landscape, blowing up mutant beasts and using their meat for tacos to help humanity survive. One of Romero’s other sons, Michael, was also working with the group, and they decided to work together to bring Donovan’s title to life. “Let’s just start making it as a family game,” Romero said. They funded it under their own development studio, Romero Games. The game was eventually picked up by Adult Swim for release in June 2015.

John Romero is also revisiting at least one game from his own youth: Dangerous Dave. While at Softdisk, the Shreveport-based company where he would later meet Carmack and Hall, Romero created the Dangerous Dave hero based on the local southerners in town. Little did Romero know that, long after he left Softdisk, Dangerous Dave carried on a life of his own.

Because the game ran fast on PCs at the time, it found a ready audience around the world – particularly, for no apparent reason, in India. “The game is bigger in India than Doom,” said Romero, who has been getting fan mail from the country for years. Sensing an opportunity, he bought the rights back to the game, and is now working on a mobile version of Dangerous Dave.

As for whether or not he might revisit some of the id games that made him famous, however, Romero isn’t so optimistic. “I don’t think it will happen,” Romero, who now lives in Ireland, told me. “Out of four of us that started id,” he said, “three of us talk to each other all the time.” He and Hall are still touch. In April, he announced that he was reuniting with id co-founder and artist Adrian Carmack (no relation to John) under their startup, The Night Work Games, to create a new FPS called Blackroom. But one of the co-founders remains on his own. Romero told me, “We never talk to John Carmack.” 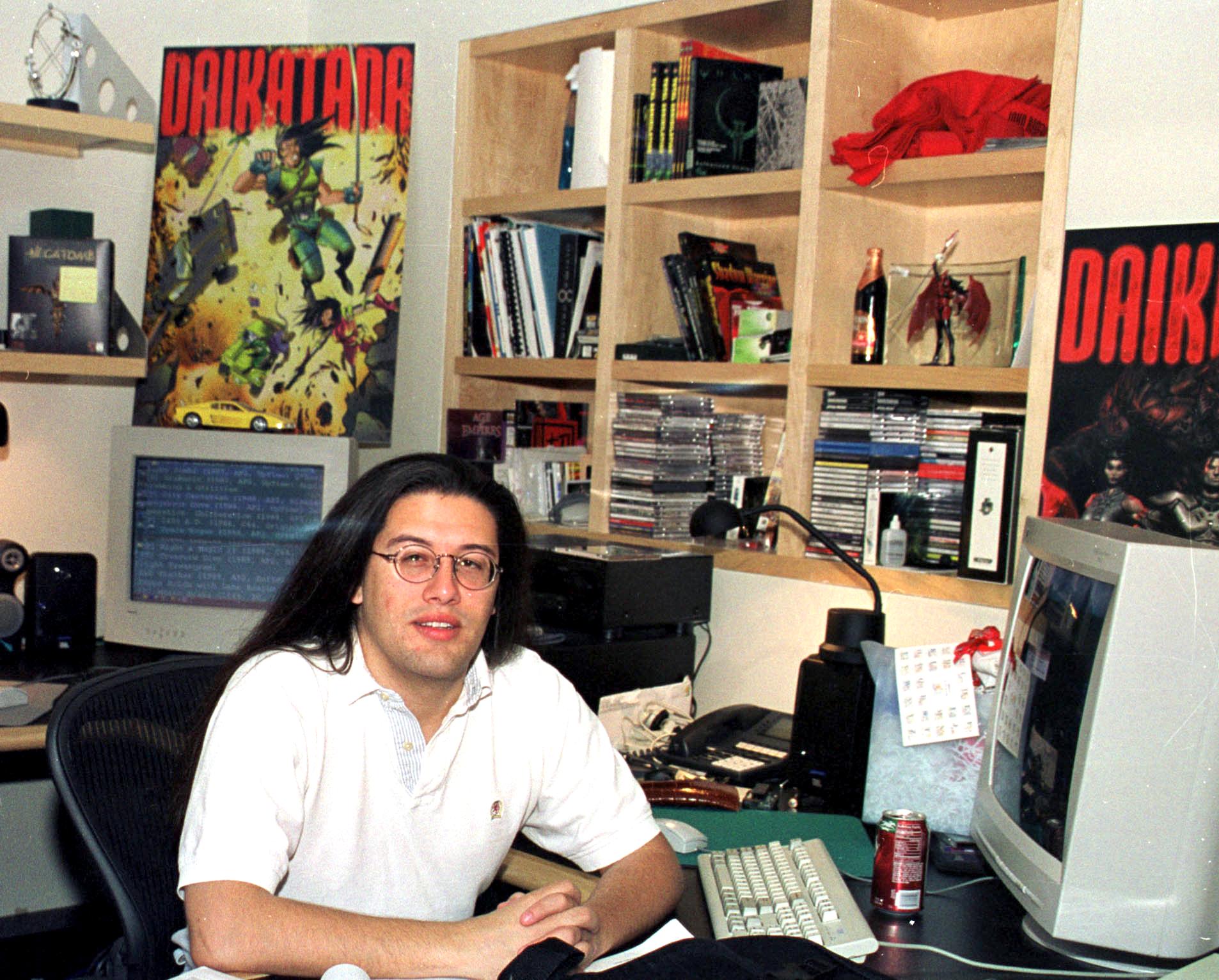 One afternoon 15 years ago in Mesquite, Texas, I was interviewing John Carmack when, once again, the conversation turned to one of his greatest passions: virtual reality.

Carmack had been fascinated by the idea since watching Star Trek: The Next Generation as a teenager, and imagining what it would be like to bring the show’s Holodeck to life. Since then, id’s games – with their fast action and first-person point of view immersion – had transported players deeper and deeper into Carmack’s own alternate worlds. But true virtual reality was still something he wanted to achieve. “It’s a moral imperative that we create this,” he told me at the time, referencing a line from the 1985 movie, Real Genius.

Little did he know there was a teenage whiz kid in California who, after reading Masters of Doom, took Carmack’s missive very much to heart. “[Carmack] said ‘it’s a moral imperative that we create this,'” Palmer Luckey, the founder of Oculus VR, told me several years later. “When Carmack has worked on technology in the past,” Luckey said, “when he has taken an interest in something, it always ends up being huge…to see him working on VR was reassuring. It was clear that this had a good shot at getting to lot of different people.”

In the years following Masters of Doom‘s publication, however, Carmack had other missions in mind. He’s since been immersed in many other projects: Doom 3 was released in 2004 to great acclaim. Id’s follow-up, Rage, followed, to mixed reviews, in 2011. Carmack was also busy building rocket-powered vehicles, hoping to create suborbital and, eventually, orbital spacecraft. And he was well on his way. In 2008, Carmack’s company, Armadillo Aerospace, won the $350,000 Level One X-Prize Lunar Lander Challenge, and, the following year, picked up another $500,000 prize.

But Carmack’s interest in virtual reality never waned. It was as much a technical challenge as it was, he says, “a noble goal.” As he explained to me recently, “I believe in this idea of building an infinite virtual world people can immerse themselves in…it’s something that has one of the largest upsides for humanity in general: the ability to simulate things that are limited in reality and distribute them to people who might not have them otherwise.” One day in early 2012, he read about a young guy in California who was posting online about VR headsets he’d created. The man’s name was Palmer Luckey. As Luckey later told me, when Carmack emailed him asking if he could buy one of the headsets, Luckey didn’t hesitate to send his hero a sample. “You’re John Carmack,” Luckey recalled thinking, “you can get whatever you want.” 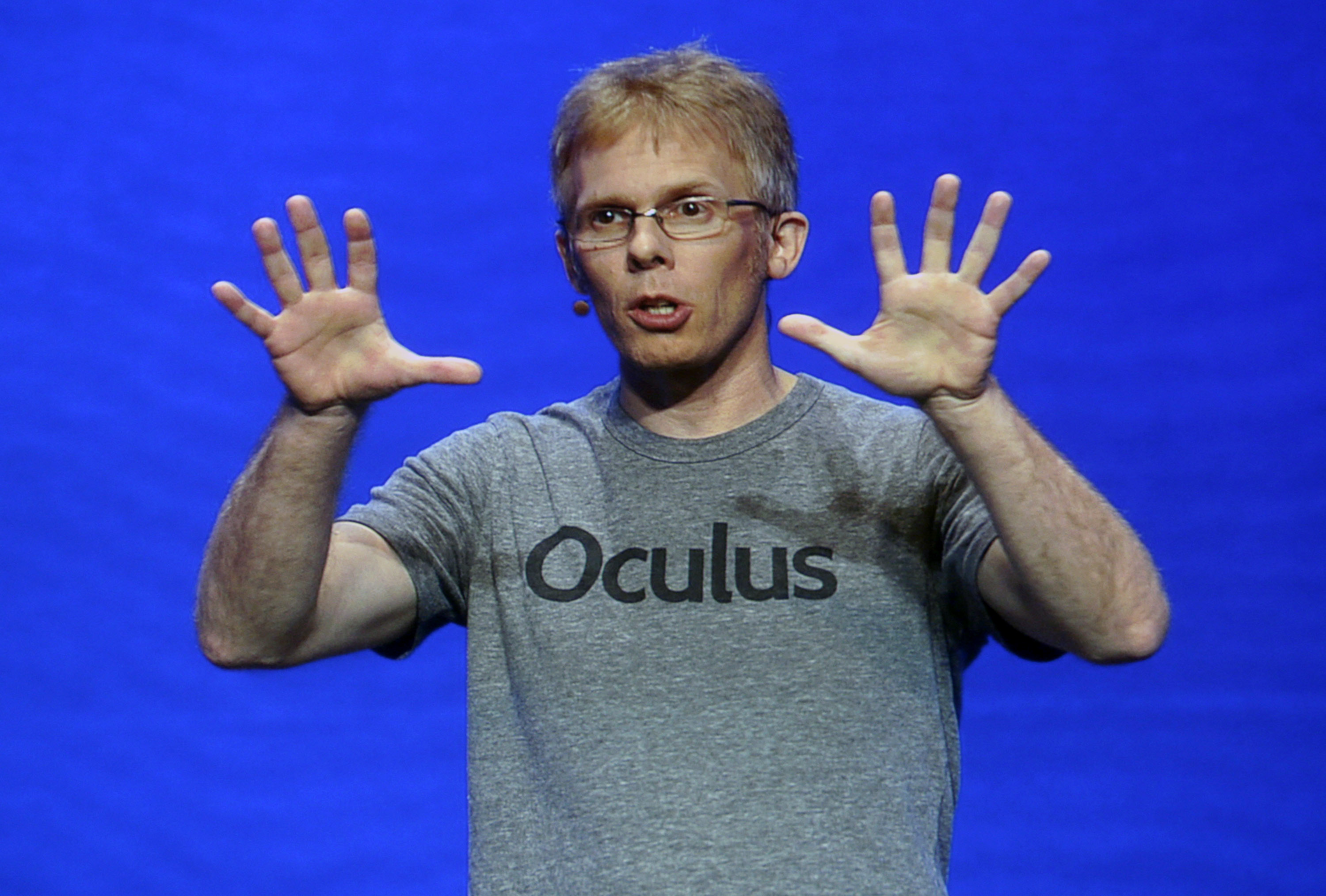 And what Carmack wanted, he soon realized, was to work on VR full-time. Technology like Luckey’s, Carmack realized, had finally hit the point of making his old dreams a real possibility. “It’s not like we arrived,” he told me, “but we have a tool that’s fundamentally more powerful than anything we had in that previous generation.” In November 2013, Carmack decided not to divide his time any more; he resigned from id Software (which had been sold to the company Zenimax in 2009) to become Oculus’s full-time chief technical officer. “It’s exactly the right place for me to be,” Carmack said.

As Carmack works on Oculus’s first commercial release, expected in early 2016, he’s not looking back on his days at id Software – or the people, such as Romero, whom he collaborated with along the way. Though Carmack has no hard feelings against his former partner, he’s more interested in the present. “I consider myself a remarkably unsentimental person,” he tells me, “I don’t look back on the good old days. The good old days for me are right now.”

While Carmack and Romero have gone separate ways, there’s one thing they still share: their legacy. Both have told me they often get approached by fans, including aspiring game developers, who want an autographed copy of Masters of Doom and who tell them how much they were inspired by their story. “I think what’s inspiring is that they see themselves in us,” Romero said. “We’re just two normal guys and we just spent a lot of time on computers…it makes them believe they can do it.” And, as they each told me recently, their source of fuel remains the same as when I was writing the book years ago. “It’s just working hard,” Romero says, “and making games.”

Carmack agrees. Like Romero, it’s not just the next generation of gamers who inspire him, it’s the ones in his own house: his kids. Though his own play time had been waning, having children has reignited his interest in games. Carmack tries to encourage them to appreciate that the opportunities now are as great as ever. “You can still go out and do something which may set some standard for how things evolve in the coming decade or two,” he says, “I’m still certainly proud of our effort.”

This is an adaptation of the foreword to David Kushner’s audiobook collection Prepare to Meet Thy Doom, a compilation of true gaming stories covering many facets of America’s biggest entertainment business: the video game industry.