Laci Peterson Murder: What You Need to Know - Rolling Stone
×

In March 2003, America changed the world’s geopolitical landscape irreparably when President George W. Bush and company led us into a war in Iraq. But among the increasing anxieties about weapons of mass destruction and the Axis of Evil, another face became a fixture of 24/7 news cycle: A beautiful, white, smiling 26-year-old named Laci Peterson.

Peterson went missing on Christmas Eve 2002 while she was eight months pregnant with a son she had named Connor. Throughout early 2003, her disappearance dominated the TV news right alongside the hunt for Saddam Hussein. The tragic story established a cast of characters who covered tabloid magazines for years, including Laci’s handsome husband Scott Peterson, Scott’s mistress, and a gaggle of celebrity lawyers. The tangled drama proved that even with other, more serious problems in the world, Americans had a bottomless appetite for true crime.

Menendez Brothers: Everything You Need to Know

Now, A&E will revisit this heartbreaking tale with the first in a six-part docuseries, The Murder of Laci Peterson. The program retraces the story that gripped America nearly 15 years ago and features interviews with members of Laci and Scott Peterson’s families, Scott’s mistress, neighbors, law enforcement, lawyers including Mark Geragos and Gloria Allred, talking head Nancy Grace, and Scott Peterson himself, from San Quentin State Prison in California.

Before you dive back into the story that captivated—and distracted—millions, here’s what you need to know about Laci Peterson’s disappearance and death. 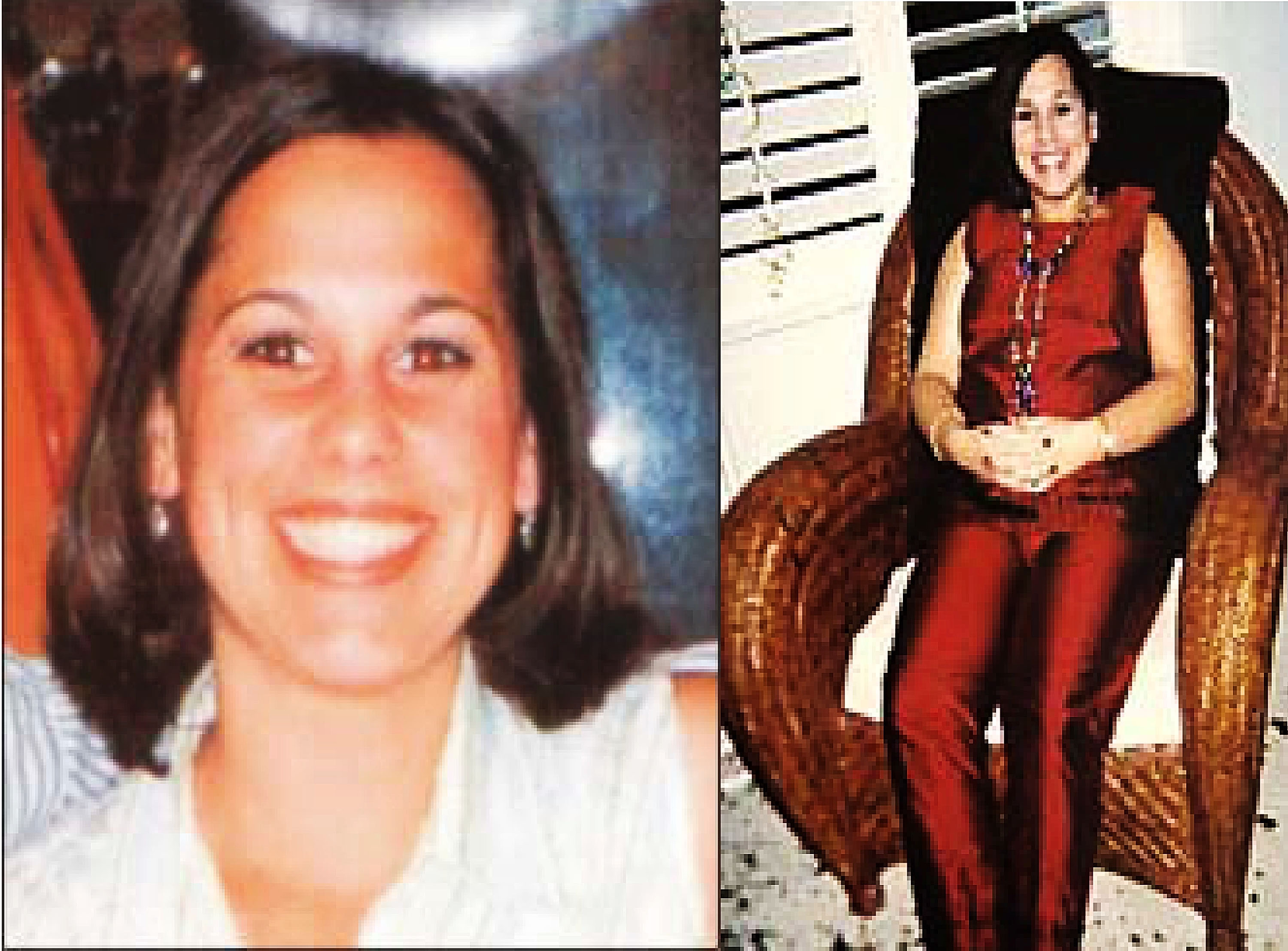 Laci Peterson went missing on Christmas Eve
On December 24th, 2002, Scott and Laci Peterson woke together at their home in Modesto, California. After eating breakfast and watching some TV, Scott left to go fishing while Laci took the couple’s dog for a walk. Later that day, a neighbor found their dog, still wearing a leash, wandering in front of the house by himself.

Scott Peterson told police he first drove to his nearby warehouse to send emails and retrieve his boat, which he brought to Berkeley Marina. Indeed, the evidence – timestamped emails and a receipt from the marina – backed him up. After about 90 minutes of fishing, Scott said, he returned his boat to the warehouse, went home to an empty house and showered.

Scott told investigators that he assumed Laci had gone to her mother’s house. He called his mother-in-law, looking for his wife. Half an hour later, Laci’s stepfather called 911 to report that she was missing.

Scott Peterson was an early suspect in the investigation
Scott Peterson first met Modesto police on the day Laci went missing at a nearby park, where she was known to walk to their dog. Police suggested going back to couple’s house – the first of many “tests” placed on Scott to gauge his reactions. As Laci’s husband, Scott was immediately on police’s radar as suspect, given the fact most acts of violence are committed by people known to the victim.

Police gave Scott opportunities to be forthcoming with information and, it was implied, demonstrate his innocence. But he failed most of these “tests.” For example, when interviewed by police on the first night Laci was missing, he declined to take a polygraph test (and continued to refuse to take a polygraph test going forward). In the following days, police said Scott did not ask them many questions and seemed unconcerned about the investigation’s progress. You know, not how a husband and father-to-be should behave in this circumstance.

Police noted Scott’s strange behavior, such as how he couldn’t remember the kind of bait he’d used when he supposedly went fishing that morning, or what he prioritized during the investigation. “His major concerns were not Laci,” one detective told People in 2005. “His major concerns were his car door hitting his other car door in the driveway, or me taking a picture of this boat in his shop, or getting a receipt for the pink slipper and sunglasses the tracking-dog people used for Laci’s scent.”

Detectives also gave Scott Peterson another test on the day after Christmas, when they executed a search warrant at his home. Once again, Scott was hesitant to cooperate with the police in ways that might prove his innocence – like taking a polygraph test – but he seemed more concerned with protecting himself. It was more strange behavior from a man who supposedly had nothing to hide. 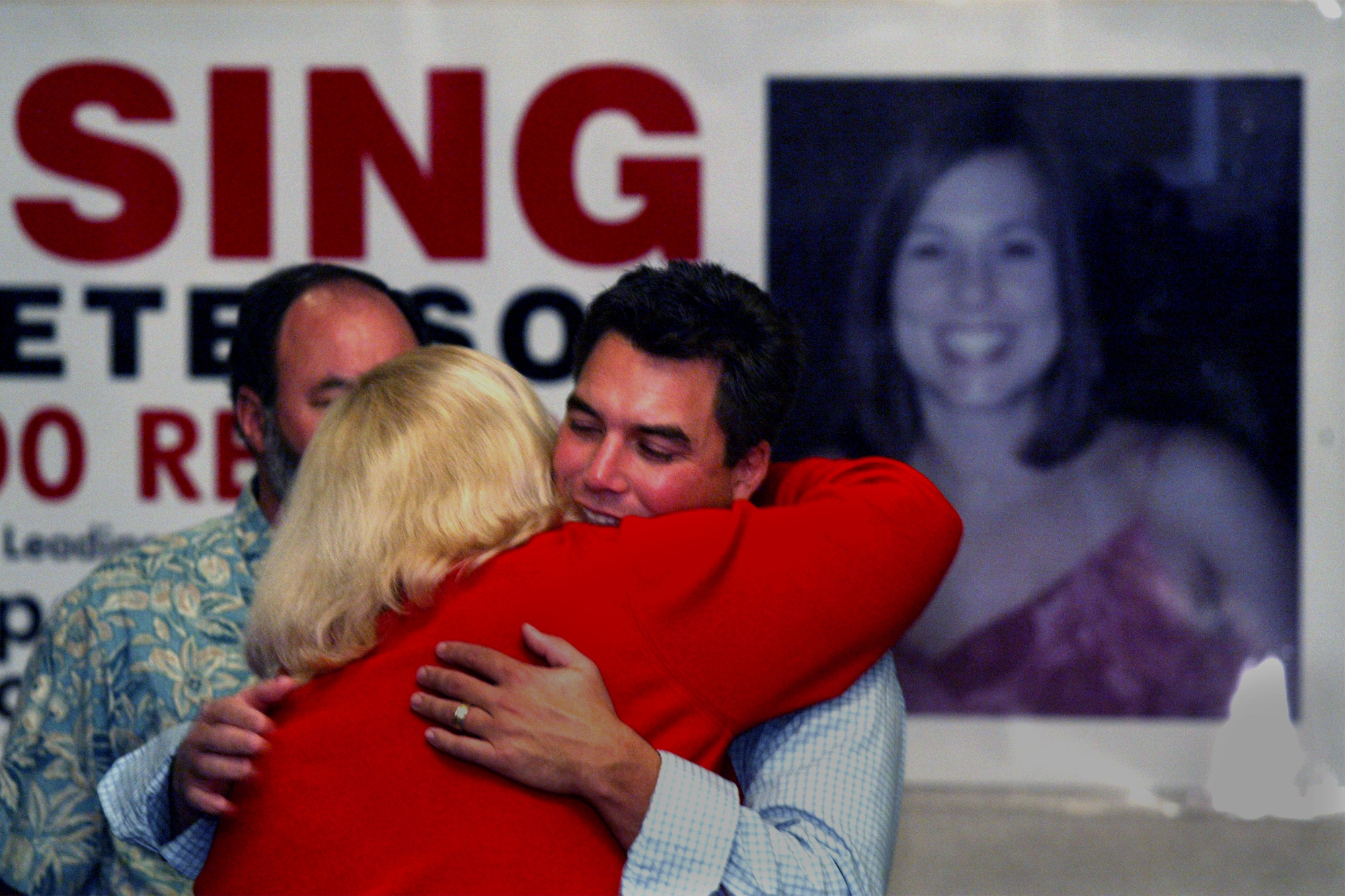 The media quickly jumped on the story
A missing pregnant woman is newsworthy enough, but it was the police search of the Peterson home after Christmas that tipped off the media to the seriousness of the investigation into Scott Peterson. All of a sudden, the handsome, charming husband was a viable suspect – and that was a much sexier story.

National news networks immediately began to camp out on the street, lunging at Scott any time he entered or exited his home and exasperating his neighbors with their noisy trucks and lights. Police, and eventually lawyers for both sides, began to use the media to leak information – both rumors, like one that Laci had been murdered by a Satanic cult, and facts like how he was hiding a mistress, to sway public opinion.

Scott Peterson seemed suspiciously aloof – and the public caught on
From the moment of her disappearance, the Rocha family – Laci’s mother, stepfather and brother – repeatedly spoke to the media in the teary-eyed manner viewers have come to expect from loved ones in crisis. The family publicly supported her husband and defended his innocence.

The public’s view of Scott Peterson was a different story.

On December 31st, 2002, the town of Modesto held a public vigil for Laci and Connor. Scott declined to speak at the vigil, but he was in attendance. And so were photographers who captured him in two damning photographs that haunted him throughout his eventual trial.

In one picture, Scott bends down alongside his niece to set down a candle, a big smile across his face. In a second picture, he is standing with some people and laughing. By any measure, this behavior at a vigil for his missing wife and unborn child looked bad.

Some explained Scott Peterson’s demeanor as simple aloofness. There is, after all, no guidebook on how to behave when one’s eight-months-pregnant wife goes missing. Quickly, though, media scrutiny – particularly Grace, who had a bulls-eye on Scott from the beginning – lead the public to turn on Scott. He wasn’t solemn enough. He wasn’t panicked enough. He was good-looking, charming and, it turns out, lying.

Scott had a hidden relationship on the side – and had told his lover his wife was dead
Scott Peterson did something else during Laci and Connor’s vigil as well: he called his secret girlfriend.

Amber Frey, massage therapist and single mom, was introduced to Scott by a friend in November 2002 and began a romantic relationship. In early December, around the same time they were photographed at a holiday party together looking cozy, Scott told Amber his (then very-much-still-alive) wife had died and this would be his first Christmas season without her. Police later wondered if Scott’s admission to Amber of a dead wife was tantamount to confessing to a premeditated murder.

On December 30th, 2002, after seeing a newspaper article about Laci’s disappearance, Frey called a tip line and immediately began working with the police to pull whatever useful information she could out of her boyfriend and secretly record it. (In all, she recorded over 29 hours of phone calls with Scott Peterson.) The next day, Peterson told Frey he ringing in the New Year in Paris with friends. He was actually at Laci’s vigil.

Neither Scott, the Petersons nor the Rochas knew the police were aware of Scott’s affair or that Amber Frey was recording their phone calls. Then, in mid-January 2003, police learned that The National Enquirer had in its possession a photograph of Frey and Scott and intended to publish it. On January 24th, Frey – shaking like a leaf – revealed herself a press conference and confessed that Scott Peterson had told her she was single.

From that moment forward, the Rocha family turned on their son-in-law. So, too, did the small army of volunteers who had been looking for Laci.

In late January 2003, Peterson’s Good Morning America interview with Diane Sawyer went so disastrously that it calcified the public hatred against him. For one thing, he lied to Sawyer when he said that he had told police about his affair the day Laci went missing. (He told police their marriage had been fine.) He also told Sawyer that Laci knew about his affair with Amber and was “OK with it,” a statement which just about threw Nancy Grace into a fit. Most damningly, Scott referred to his missing wife in the past tense, saying Laci “was” amazing. 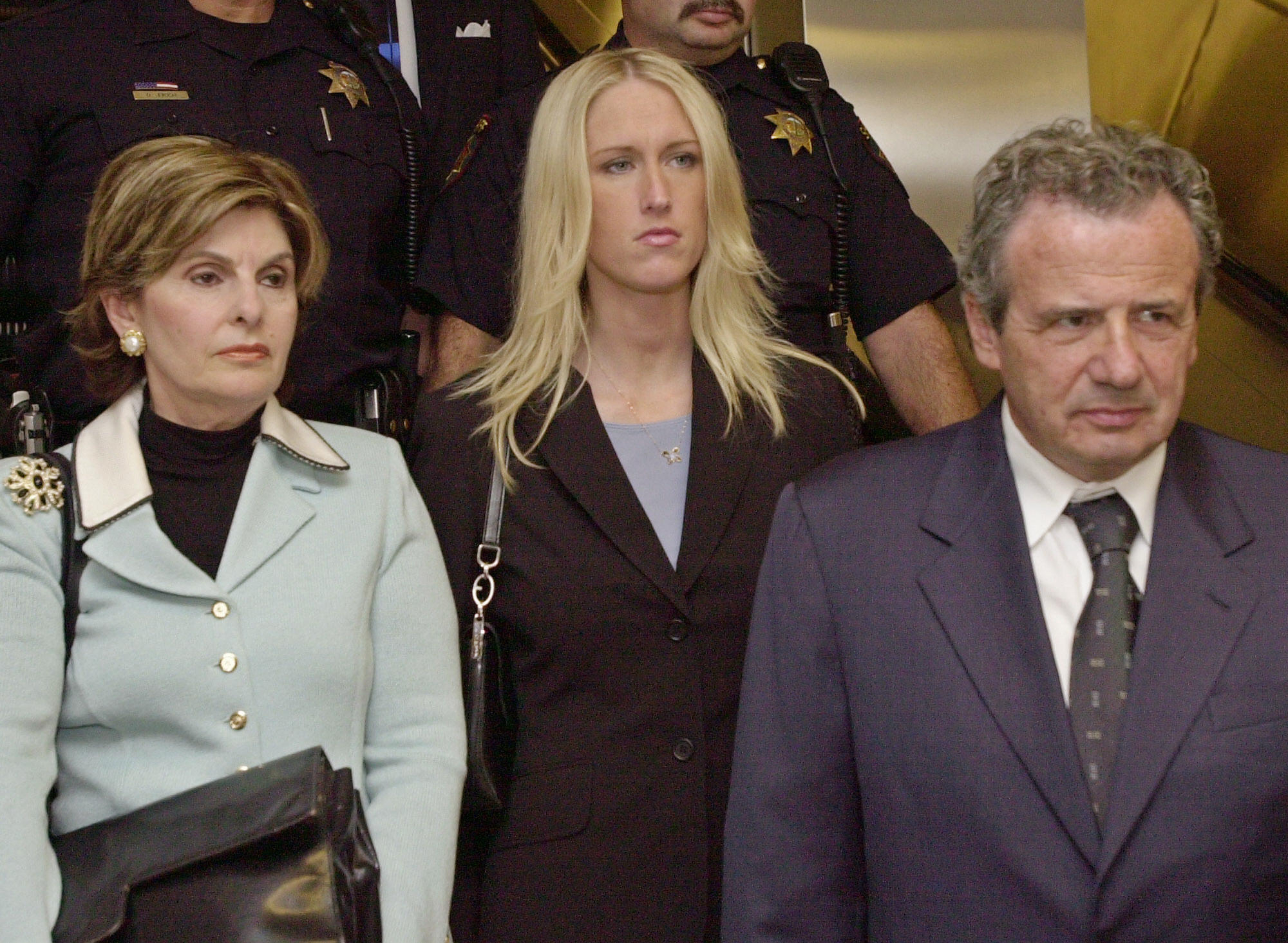 It didn’t take long before Peterson was arrested
On January 5th, 2002, divers using sonar equipment searched the Berkeley Marina where Scott Peterson had gone fishing – the place where police suspected he had dumped Laci’s body. Nothing was discovered.

Four months later, in April, locals found two mutilated, decomposed bodies wash ashore – one which seemed to be an adult woman’s torso and another which was an infant. Within days, DNA tests confirmed the bodies belonged to Laci and Connor.

Scott Peterson had mostly been staying in San Diego with his family, allegedly to avoid media attention. It was there that police arrested Scott at a golf course on April 18th. He was carrying over $10,000 in cash, camping gear, his brother’s ID and four cell phones. Critics were quick to point out that San Diego is also near the Mexican border and Scott had dyed his hair blonde and grown a beard – further suggesting he may have been planning to run.

Scott Peterson was arraigned on April 21st, 2003, and charged with two counts of murder. Connor, with whom Laci was still pregnant at her death, was included as a murder victim under California’s fetal homicide law that protects any fetus eight-weeks-old. That same month, President Bush signed the Unborn Victims of Violence Act, also known as “Laci and Connor’s Law,” which criminalized harming a fetus when assaulting a pregnant woman. (The legislation was viewed by reproductive rights activists as a sneaky method to establish personhood for fetuses.)

The Rocha family sought the death penalty for Scott and the district attorney concurred. After months of jury selection and then a trial, he was convicted on November 12, 2004 of first-degree murder of Laci Peterson and second-degree murder of Connor Peterson.

In December 2004, the jury recommended Scott be sentenced to death and in March 2005, the judge agreed. Though he still maintains his innocence, he currently resides in San Quentin State Prison. According to the Modesto Bee, he filed two appeals, one in 2012 for the murder charge and one in 2015 alleging unlawful detention, which are both still pending. He has asked for a new trial. Last week, the Bee reports, the California Attorney General rebuked the request for a new trial in a 150-page document and said there is “overwhelming evidence” for Scott Peterson’s guilt. He currently still is sitting on death row.