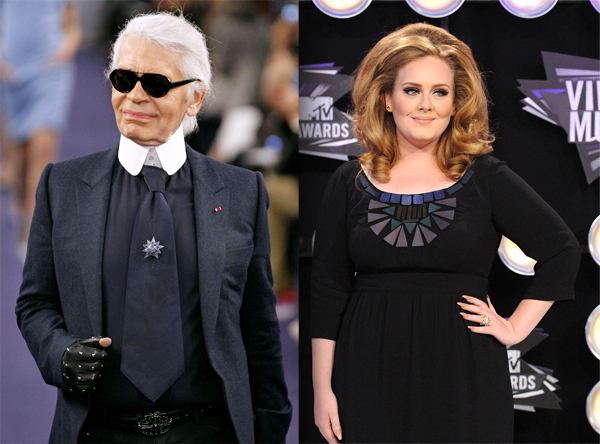 Karl Lagerfeld, creative director of Chanel and Fendi, is under fire for describing British singer Adele as “fat” in a Metro interview. “The thing at the moment is Adele. She is a little too fat, but she has a beautiful face and a divine voice,” Lagerfeld remarked with his usual candor. Shortly after, the web reacted in anger.

In the same feature, the so-called “Kaiser” of fashion also exhibits a distaste for Greece, Queen Elizabeth and the appearance of Russian men, ranking this interview among Lagerfeld’s more polemic (something of a feat, given his rich legacy of controversial commentary).

As the pop world reels over the weight remark, Lagerfeld has already gone into damage control, telling the Metro yesterday that his comment was taken out of context. “I’d like to say to Adele that I am your biggest admirer. Sometimes when you take a sentence out of the article it changes the meaning of the thought.”

Apparently, Adele’s appearance only arose in discussion because Metro asked him what he thought of the polarizing songstress Lana Del Rey. “I prefer Adele and Florence Welch. But for a modern singer, she’s not bad,” he replied in the original piece, before contrasting Del Rey’s image with Adele’s. “In her photos, [Del Rey] is beautiful. Is she a construct with all her implants? She’s not alone with implants.”

In response to the criticism, Lagerfeld concludes: “What I said was in relation to Lana Del Rey, and the sentence has since been taken out of context from how it was originally published. I actually prefer Adele. She is my favorite singer and I am a great admirer of her. I lost over 30 kilos over 10 years ago and have kept it off.”