The spirit of Amy Winehouse lives on, or at least her style does, in the realm of plucky French designer Jean Paul Gaultier, whose Spring 2012 Couture showing emulated the deceased singer’s eccentric charms.

It’s not the first time fashion has felt the weight of Winehouse’s influence: her disturbed savant dichotomy and retro-fied personal style caught designers’ and stylists’ attention, making her a popular reference in mid-2000’s editorials and even, at one point, on Chanel’s runway. More recently, her successful design collaboration with Fred Perry continued even after her death. But Gaultier’s gesture is the most significant post-mortem tribute any major fashion figure has paid to Winehouse.

The collection he presented in her memory has garnered mixed reactions. WWD noted the technical beauty of the clothing, which features Winehouse-specific sculpted cocktail dresses, throwback pencil skirts and “polo shirts” fashioned as bosom-enhancing corseted blouses. But the trade paper found the premise for the collection risible. “Ill-advised at best,” the review scorned, contrasting it unfavorably to Alexander McQueen’s poignant, much-hailed “Isabella Blow” tribute collection.

Gaultier insisted that his intentions behind the ostentatious display were pure in intent. “I think Amy Winehouse was truly a fashion icon,” he explained, noting the rest of the fashion community had failed to honor the troubled singer. 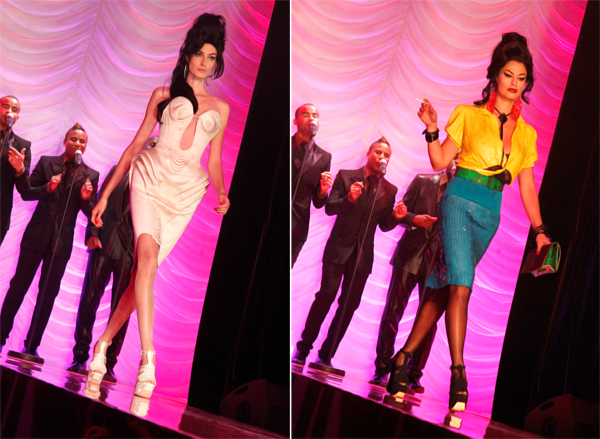 He has a point. As Winehouse plummeted from the spotlight and into tabloid scandal, the notoriously fickle industry found “safer” sordid inspirations elsewhere (see: the Kills). Her death in July received surprisingly little attention in the fashion press, with Fendi (the Italian luxury label currently designed by Karl Lagerfeld, also creative director of Chanel) being the rare entity to issue a commemorative statement as tribute. So Gaultier’s sudden (belated?) gesture has taken people a bit by surprise.

The New York Times’ fashion critic, Cathy Horyn, noted for her brazen candor and her cutthroat but unpredictable standards, offered a different take. She appreciated the designer’s intentions while noting the limitations of the source material (i.e., an unconventional muse who sadly never fully evolved). Ultimately, she found value in the “marvelous” collection where others did not. “She was not a great beauty; her head and features were rather large for the rest of her body, and her fashion sense was a mixture of juke-joint singer and Eighties-obsessed London teenager,” Horyn noted, highlighting Winehouse’s “dynamic” awkwardness in contrast with fashion’s “sleek,” “purring” ideals. And she praised Gaultier’s ability to bring those distinct quirks to his runway without it coming off as “artificial.”

Whether Winehouse’s long-time supporters and the music community as a whole notice, or appreciate, this oddly timed tribute to the singer remains to be seen.