iPhone 7: Everything You Need to Know - Rolling Stone
×

As has become something of a modern ritual for the cult of Apple, a throng of the company’s executives took to the stage in San Francisco this morning to enchant and delight us with news of its latest creations. In addition to an updated Apple Watch, today’s main announcement was the upcoming iPhone 7 and 7 Plus: both will be available to order on Friday, September 9th, and begin shipping a week later on September 17th. Here’s what you need to know about them: 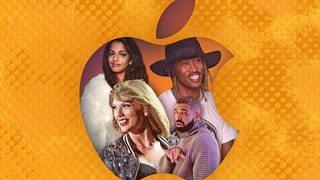 Improved physical design
While the new iPhones maintain the same basic shape and styling of the 6/6s generations, a number of improvements have been made to the physical design. The new model is water resistant, for one, meaning you can get it wet without worry (though you shouldn’t submerse it in water, Lil Wayne). It also comes in two new finishes, black and jet black, the latter of which appears to be a point of pride for Apple, with a glossy, mirrored design (think “piano black”). Apple is also ditching its space gray option for a standard matte black model, along with silver, gold, and rose gold.

How Apple Hopes to Win the Streaming War

As Apple Chief Design Officer’s dulcet tones informed us in a prerecorded video, the camera and antennas have been embedded into the phone’s “a-lu-minium” body, making for cleaner lines. For the first time, the iPhone 7 now has onboard stereo speakers – one at the top and one at bottom of the device. The company says this makes the sound it produces twice as loud, and increased dynamic range means it should sound better as well.

New camera system
Apple has upgraded the iPhone’s camera system with a f/1.8 aperture, six-element lens, a larger sensor, a flash with four discrete LEDs, and a built-in flicker sensor – all of which means that the camera should take better photos, even in weird, flickering fluorescent lighting.

But the biggest camera improvement is exclusive to the heftier iPhone 7 Plus, which has a dual camera system that, for the first time, allows for 2x optical zoom without any loss of image quality. Switching between the two cameras is seamless: just tap the 1x or 2x button in the camera app and it switches automatically, or smoothly zoom between them using an onscreen slider. Apple has also developed a new feature that uses both lenses to reproduce a shallow depth of field, not unlike what can be produced with larger DSLR cameras, with the subject in sharp focus and the background pleasingly blurred. This feature will be available via a software update later in the year.

New home button
For the first time since its inception, Apple has redesigned the rather iconic home button for the iPhone 7. It’s now force sensitive rather than being physically pressed in; like the Force Touch trackpads in recent MacBook laptops, it can respond differently to varied levels of pressure applied by your finger. The button also makes use of the Taptic Engine haptic feedback system (as seen on the Apple Watch), which provides different vibration feedback for various alerts and interactions.

No more headphone jack
Apple is notorious for being the first to drop longstanding technological standards, and this time around it’s the ubiquitous 3.5mm headphone jack. If you want to use the iPhone 7 with headphones or speakers, you’ll need to either go with wireless devices, devices that use Apple’s lightning port to connect (yes, these are very rare), or use an adapter. Apple will be including earpods with a lightning cable connection in the box, along with a small lightning-to-headphone jack adapter cable for using your standard headphones.

Apple has also developed a new set of wireless headphones called AirPods, which are designed to work seamlessly with the iPhone 7. Instead of Bluetooth, the company has developed a new wireless technology that handles the connection to the phone. Sensors detect when the AirPods are in your ears and play or pause music accordingly, and you can tap them to activate Siri. Apple claims five hours of battery life for the AirPods, which come with a battery case that provides 24 hours of use. The AirPods will be available in late October for $159, and Beats (which Apple now owns) is also introducing a line of headphones that make use of the new wireless technology.

Better performance, more storage
Under the hood, the new iPhones are powered by Apple’s latest chip, the A10 Fusion— “40-percent faster processing” and “two thirds the power consumption” graphics performance, according to Apple, when compared to the iPhone 6s. Battery life is improved as well, with Apple claiming the iPhone 7 lasts two hours longer than the iPhone 6S. The iPhone 7 will maintain the same pricing tiers (starting at $649 for the 7 and $769 for the 7 Plus), but with more space: Apple has doubled the storage in each of the models, finally dropping its much-criticized 16GB storage option. The lowest tier is now 32GB, with 128GB and 256GB options above it.