'Impeach 45': A Brief History of Walmart's Botched Attempts at Being Political - Rolling Stone
×
×

This week, supporters of President Donald Trump unleashed their anger on Twitter, creating a #BoycottWalmart hashtag against the company for marketing “Impeach 45” T-shirts and baby onesies on its website. The apparel was made by a third-party seller, Old Glory.

Ryan Fournier, chairman of Students for Trump, has been recognized as one of the leaders of the nationwide backlash after tweeting early Monday morning: “@walmart why are you selling Impeach 45 baby clothes on your website????? What kind of message are you trying to send?”

By Tuesday morning, Fournier’s tweet had garnered over 7,500 retweets and 2,900 comments, and Arkansas-based Walmart stopped promoting the apparel on its website. That afternoon, a representative for Walmart told Rolling Stone via email that the “Impeach 45” tees “were sold by third party sellers on our marketplace, and were not offered directly by Walmart.” The spokesperson added: “We’re removing these types of items pending review of our marketplace policies.” (Rolling Stone reached out Old Glory for comment, but we have not heard back at this time.)

Before they were able to pull the shirt, Fournier and his cohorts had inspired thousands of Trump defenders, who took to social media to scold Walmart. “Impeach 45? Nope. We boycott Wal-Mart. Sell your cheap cheap to liberals only then. Let’s see how you do without conservative $$,” one former customer posted on the retailer’s Facebook page. Another wrote: “I’m very disappointed and outraged that you, Walmart, and American company would sell merchandise that promotes impeaching our President. First of all, he has done NOTHING that he should be impeached. And second, where’s LOCK HER UP T-shirt’s or OBAMA SUCKS T-shirts. Your bias is clear and I for one, a former loyal Walmart shopper for many years will be spending my money elsewhere. Shame on you.”

There’s just one problem – Walmart absolutely has sold products that run the political spectrum. As of this writing, the superstore continues to peddle pro-Trump hats sporting the slogans, “Make America Great Again” and “Trump 2020: Keep America Great,” and still sells both favorable and mocking political clothing from Old Glory, such as the “Clinton 2016” election T-shirt, Hillary Clinton prison costumes and a Bernie Sanders ugly Christmas sweater. 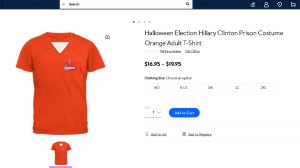 Of course, Walmart is far from the only retailer that has been criticized for selling unfavorable clothing. In 2010, the Anti-Defamation League pushed Urban Outfitters to pull a striped tapestry that looked like uniforms forced on gay prisoners in Nazi concentration camps (just one of their many blunders). In 2013, Marc by Marc Jacobs pulled another T-shirt for resembling imagery from neo-Nazi band Skrewdriver. Yet, the adverse reaction is nothing new for Walmart, which previously found itself ridiculed and snubbed from various political and social parties. Here, a few of their more questionable decisions over the years.

Walmart mistakenly sell Nazi shirts
Back in November of 2006, Walmart stopped selling T-shirts resembling a Nazi SS emblem. This happened after a Maryland Air Force veteran-turned-blogger Rick Rottman posted an image of the item’s skull and crossbones on his online journal Bent Corner beside an insignia used by Adolf Hitler’s Wafen SS unit called 3rd SS Division, according to the Associated Press.

On his site, Rottman wrote that he had been walking through the mens’ section of the store when he “noticed something weird over at a wall of T-shirts” and there he found a design “that looked remarkably like something related to Nazis, specially, the totenkopf or ‘Death’s Head.”

Walmart said that “respect for the individual is a core value of our company and we would never have placed this T-shirt on our shelves had we known the origin and significance of this emblem,” according to the AP.

Walmart supports both Black Lives Matter and Blue Lives Matter
In December 2016, Walmart had to remove T-shirts emblazoned with “Black Lives Matter” after the National Fraternal Order of Police sent a letter urging the company to stop selling the product. “I understand that these are third party sales and not Walmart products, but I am concerned that allowing these articles of clothing to be sold in this way will damage your company’s good name amongst FOP members and other active and retired law enforcement officers,” FOP national president Chuck Canterbury wrote in the letter. Today, Walmart is selling “Black Lives Matter” cases for Apple iPhones, posters and a tank top, while promoting “Blue Lives Matter” T-shirts. 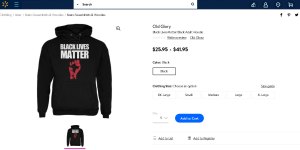 Walmart markets stereotypes of Israelis and Palestinians
In 2015, Walmart sold Israeli Defense Forces Halloween costumes for children and advertised a hook-nosed prosthetic “Sheikh Fagin nose,” as being “perfect for an Arab Sheik”, according to BBC. The company halted the sale of the items after people condemned its marketing amid violent unrest between Israel and Palestine.

Walmart appears to endorse lynching of journalists
In November 2017, Walmart stopped selling shirts on its website made by third-party seller Teespring, which read, “Rope. Tree. Journalist. SOME ASSEMBLY REQUIRED” after the Radio Television Digital News Association sent a letter in which the Washington, D.C. group wrote that nearly three dozen journalists were assaulted in the U.S., and 48 others had been killed throughout the world that year.

“It is our belief that at the least, T-Shirts or any other items bearing such words simply inflame the passions of those who either don’t like, or don’t understand, the news media,” wrote RTNA executive director Dan Shelley. “At worst, they openly encourage violence targeting journalists. We believe they are particularly inflammatory within the context of today’s vitriolic political and ideological environment.”

In a statement, Walmart said that it pulled the shirt from its site, according to Bloomberg. “As soon as we were alerted to this content promoting violence against journalists we removed the content, added this content to our automated scanning systems, and kicked off a human sweep of the site to find and remove any similar content.”