A small beachside town nestled away on the Eastern coast of Florida, Melbourne is home to an astounding number of multi-billion dollar companies. L3Harris, the town’s largest employer, is a military and defense contractor, bringing in over $18 billion of revenue annually. While a surfing town hosting one of the largest defense contractors in the nation may seem odd, the area also boasts an alluring tourism, space and startup scene.

Melbourne sits along the southern tip of the Space Coast, a pristine region of the Floridian coastline anchored by the Kennedy Space Center and Patrick Space Force Base. The Space Coast was Ground Zero during the Cold War, attracting some of the nation’s brightest engineers, scientists, and NASA’s best to actualize the American dream of walking on the moon. However, Melbourne is far more than a gateway to space. In the shadows, a burgeoning group of young, driven, and savvy entrepreneurs are forming beneath the slow pace of a cozy beach town.

We met one starry-eyed 22-year-old entrepreneur, with a remarkable story and a fire in his belly to turn an antiquated and often neglected industry sideways. Benjamin Stern, “Ben”, to his friends and co-workers, is the founder of Nohbo, a startup developing technologies considered to be humanity’s best shot at breaking its addiction to single-use plastics.

Nohbo’s team of mission-driven scientists have figured out how to encapsulate personal care products in water-soluble film. Nohbo’s film meets its demise and biodegrades instantly when met with water, releasing personal care products housed inside. The company says its solutions serve hotels and beauty brands alike as a customizable packaging innovation, built to carry mass brands in a format that leaves no trace behind. 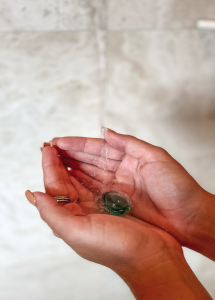 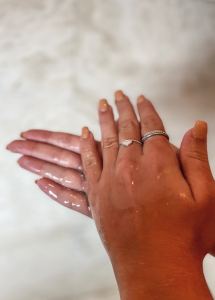 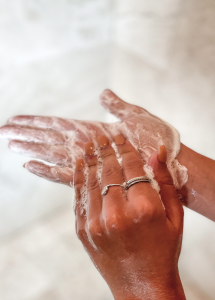 The humble roots of Nohbo’s journey begin in the young founder’s upbringing. Originally from Seattle, Washington, Ben was taught the often-repeated mantra to “reduce, reuse, recycle”. However, throughout our conversation, he conveyed that this age-old repetitive catchphrase was less enticing and more… archaic. Ben was looking to eliminate plastic waste outright, not just band-aid the problem.

As Ben entered adolescence, his inventions and ruminations on solving big-industry waste took a back seat while his family moved around, hopping from Seattle to the DC area and finally settling down in the Space Coast. Following a freshman high school biology class where Ben saw the tragic impacts of plastic pollution on ecosystems at large, a spark was reignited with a passion to preserve and protect the planet. However, one large question remained: how?

Stern was struck with an idea, after seeing his mother use a Tide Pod. Searching for a quiet place to explore his thoughts, he found solace in the bathroom which was cluttered with various plastic containers, bottles and debris. He realized the sheer quantity of accumulated plastic by his family was just a tiny percentage of the rest of the world’s rapidly expanding trash pile.

This understanding led to what Ben refers to as his “eureka” moment, the instant in which he stumbled upon an idea that would change his life – water-soluble packaging. Combining the concept of a laundry pod with his desire to eliminate excessive personal care plastic, Ben scribbled down a concept, which would eventually become known as Nohbo Drops.

To begin this foray into fixing a bigger problem than his 16-year-old self even recognized at the time, Ben took the first step and reached out to several Fortune 500 companies to ask for feedback on his concept. After countless hours of cold calling and emailing, Ben got what he was after; an attentive audience with the executives of two Fortune 500 companies. The positive feedback reaffirmed his drive to pursue his ambitious goals. Faced with what most ground-up entrepreneurs must do, Ben had to figure out financing for his startup. 14, Stern kickstarted his career at Jersey Mikes, a sub shop, alongside transitioned to a cart pusher at Wegmans, a grocery store chain. These jobs helped Ben raise enough money to prototype his product, and taught him a number of invaluable lessons along the way. Ben applied and was accepted onto Shark Tank in 2016. He successfully struck a $100,000 investment with billionaire maverick Mark Cuban on the show.

Word of mouth spread like wildfire, and Ben began looking at ways to patent and secure rights to his inventions. He envisioned his single-use, water-soluble packaging as the outright solution to the pervasive plastic problem that entangled the entire personal care industry. Nohbo currently owns three issued patents, with another six filed on its behalf.

Suki Waterhouse’s Evolution From the Runway to the Recording Studio

In 2020, Nohbo embarked on its first institutional fundraising round, a $3.6 million dollar seed round led by a Boston-based VC fund, Material Impact. Through this investment, Ben built out a team of experts well versed in their fields, and set up a cutting-edge, vertically integrated facility in the heart of Central Florida. Nohbo was able to advance R&D, engage with large partners, and launch a direct-to-consumer brand, Sunrise Session, the newest output of the Nohbo crew.

When asked about his ideal customer, Ben disclosed that he collaborates and partners with progressive consumer packaged good “CPG” companies and beauty brands eager to convert their existing products and packaging into podded form factors. Described that customers are unwilling to sacrifice quality for sustainability. Nohbo claims to deliver uncompromisingly on both criteria.

If Drops were used in lieu of plastic counterparts for a single day, the impact would be monumental; the equivalent weight of nearly 140 blue whales in plastic packaging, 28 Olympic-sized swimming pools of water saved, as well as the prevention of 7200 sumo wrestler’s worth of preservatives from polluting water and waste streams.

Going forward, Nohbo is launching a new technology called Hydrofills – Multi-use Drops. When a 1 oz Hydrofill Drop is mixed with 6 oz of water, it claims to form a 7 oz container of viscous shampoo, creamy conditioner, or gel-like body washes. This solution achieves cost parity with mass personal care brands, helping to eliminate the “green tax”, a premium price most sustainable products have.

In our journey exploring this eclectic little surf town, meeting with futurists of space and Earth, digging into the world of small-town startups provided us with a raw outlook on those working to change the world around us. Of the many nuances discovered within the Nohbo team, the heart of their mission was grounded in one fundamental element: the people.

From a 16-year-old examining a dilemma, to a 22-year-old looking to solve a crisis, Stern is wise beyond his years. His leadership is bolstered by eager and passion at all levels of the company. From top to bottom, Nohbo embraces their goal of disrupting the sustainability market, creating revolutionary technologies, and most importantly, they are not willing to make concessions to accomplish this lofty objective.