March 21, 1967: Charles Manson, 32-year-old career criminal, gets paroled from McNeil Island prison in Washington state, after doing 7 years for transporting women across state lines for the purpose of prostitution and forging checks. He has already spent most of his life in government custody: orphanages, reform school, jail, probation. Twice divorced, father of two abandoned sons, a student of Scientology, a pimp, a car thief, and an amateur guitarist, he hits the streets.

April 1967: Manson meets Mary Brunner, a librarian at Berkeley, the first of his “Family” recruits. He moves in with her.

May 1967: He picks up 18-year-old Lynette Fromme (later “Squeaky”) on Venice Beach and brings her back to Mary’s place. He meets Ruth Anne Moorhouse when her father Dean picks him up hitch-hiking and brings him over for dinner. She runs off with Charlie, but she’s underage. When the cops bust him, he gives his occupation as “minister.”

Charles Manson Today: The Final Confessions of a Psychopath

Fall 1967: Charlie packs the ladies into a VW minibus and moves to L.A. He looks to make connections in the music world, offering his girls as bait to lure promising males. They wander around L.A. and Topanga, scrounging food from dumpsters. Charlie gets his first record-company audition, a three-hour session, but doesn’t get signed. Susan becomes pregnant.

March 1968: Mary gives birth to a son, the first of many Family babies. Charlie names the baby Valentine, after the hero of Stranger In A Strange Land. A couple of the girls meet Dennis Wilson of the Beach Boys, who picks them up hitch-hiking on the Sunset Strip. Charlie and the girls move in with Dennis and meet L.A. scenesters like producer Terry Melcher.

Summer 1968: Charlie does more studio sessions, hoping for a record deal with the Beach Boys’ label. Brian Wilson apparently isn’t impressed. The family — now a couple of dozen — moves to Spahn Ranch, a movie set owned by the elderly George Spahn, whose sex sessions with Fromme give her the nickname.

September 1968: The Beach Boys record Manson’s song “Cease To Exist,” which Dennis has revised and retitled “Never Learn Not To Love,” for their next album, 20/20. It comes out in December as the B-side to “Bluebirds over the Mountain,” which peaks on the charts at Number Sixty-One. 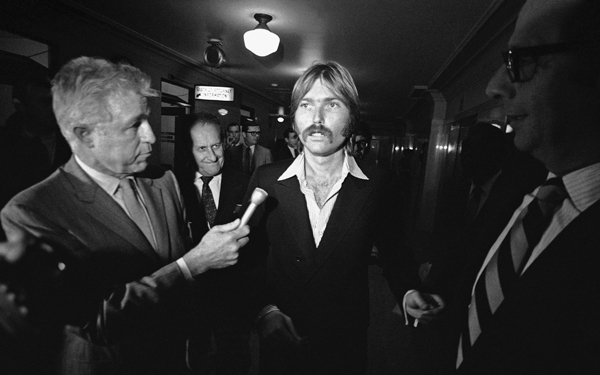 March 1969: Angry at Terry Melcher’s failure to deliver a record contract, Manson goes to Melcher’s house on Cielo Drive, unaware that Melcher has already moved out. He shows up in the middle of a party given by one of the new residents, Sharon Tate.

July 1, 1969: Tex Watson, while living at the ranch, sets up a drug burn. He makes a deal to sell 25 kilos of pot he doesn’t have, hustling $2500 out of a black dealer named Bernard “Lotsapoppa” Crowe. Watson takes the money and runs. When Crowe demands his money back, Manson arranges a meeting at Crowe’s apartment — and shoots him in the chest.

July 25: Bobby Beausoleil, a friend of Charlie’s, gets burned in another drug deal gone bad, this one involving Gary Hinman and a biker gang, the Straight Satans. Burned for a thousand dollars, Beausoleil goes to Hinman’s home with a handgun, a knife and a few Family accomplices: Atkins, Brunner, Bruce Davis and Manson, who cuts off Hinman’s ear. After Beausoleil shoots him dead, Atkins writes “POLITICAL PIGGY” on the wall in Hinman’s blood.

August 6: After the police find Hinman’s body, Beausoleil tries to make his getaway — in the dead man’s car. When the police catch him on the highway, they also find a bloody knife hidden in the tire well. Beausoleil is booked for Hinman’s murder.

August 16: The cops raid the ranch, looking for stolen dune buggies. Charges get dropped a couple of days later. The LAPD continues to treat the Cielo and Waverly killings as unrelated.

October 10 and 12: The police return to Spahn Ranch, arresting 27 people for car theft. Manson is booked under the name, “Manson, Charles M., aka Jesus Christ, God.”

November: Atkins boasts about the killings to fellow prisoners, who turn her in, providing the first big break in the case. Danny DeCarlo, from the Straight Satans, talks to police. Vincent Bugliosi, an L.A. deputy district attorney, takes over as prosecutor. Back home in Texas, Watson surrenders to the local sheriff – his cousin. He stays in Texas for almost a year.

December 4: Susan Atkins agrees to cooperate and makes a deal with prosectors. Her attorney negotiates a lucrative book contract. Over the following days, her grand-jury testimony makes it into the newspapers.

December 6: The Altamont disaster, just as the Atkins story starts to make the news, provides journalists with handy death-of-the-Sixties metaphors ever since.

December 19: Life magazine does a cover story on Manson, just in time for Christmas, giving him his first nationwide notoriety. Life presents the prosecution’s version of the murders, introducing America to the official story of Manson and Helter Skelter. 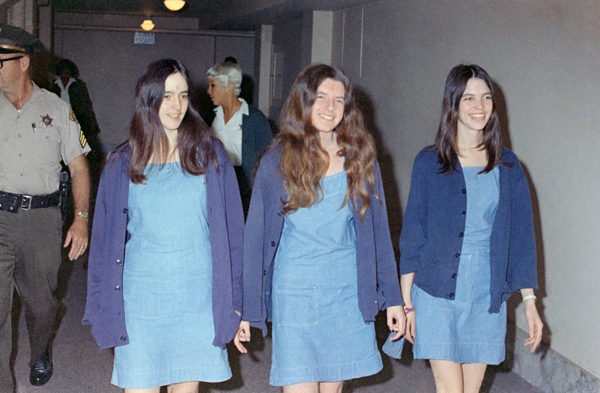 July: The trial begans, a media circus with Manson, Atkins, Van Houten and Krenwinkel acting up in court together. Manson carves an X onto his forehead, announcing, “I have Xed myself from the world. No man or lawyer is speaking for me.” The three girls carve Xs on their own foreheads.

August 3: President Nixon, giving a speech in Denver, brings up Manson, complaining the liberal media is trying to “glorify” Manson and other criminals. Nixon says, “Here is a man who was guilty, directly or indirectly, of eight murders without reason.” Prosecutors hope to keep the jury from finding out, to avoid a mistrial, but in court, Manson flashes them a copy of the Los Angeles Times headline: “Manson Guilty, Nixon Declares.” The next day, Manson waves his own sign, which says: “Nixon Guilty.”

Is Charles Manson getting married?

August 13: Linda Kasabian is granted immunity in return for her testimony.

January 25, 1971: After ten days of deliberation, the jury finds all four defendants guilty on all counts.

April 19: The defendants get the death sentence, later commuted to life in prison.

August, 1971: Watson finally goes on trial, two years after the murders. He pleads not guilty by reason of insanity, but he’s found guilty. He eventually becomes a Christian minister.

November 1974: Vincent Bugliosi becomes a best-selling author with Helter Skelter, with help from co-writer Curt Gentry. He presents it as a gory pulp thriller, starring the heroic investigator who solves the case of the Beatles-crazed hippie murder cult. It becomes the all-time biggest true-crime book, giving permanent superstar status to both Bugliosi and Manson.

September 5, 1975: Squeaky Fromme, wearing a red nun’s habit, points a Colt .45 at President Gerald Ford on his way to the California state capitol. It doesn’t go off. She makes the cover of Time with the headline, “The Girl Who Almost Killed Ford.” Coming right after Helter Skelter, this incident establishes the Manson story as the world has known it ever since.