When DC Comics relaunched its fictional world from scratch last fall, some aspects of the DC mythos temporarily fell by the wayside, such as the notion of parallel worlds featuring different versions of the company’s iconic heroes. Earth Two, a new series by writer James Robinson and artist Nicola Scott, reintroduces the concept by putting a new spin on the original versions of characters like the Green Lantern, the Flash and Superman that diverges notably from the past several decades of DC lore. In the second issue of the comic, in stores June 6th, Robinson and Scott prove just how different this world is by revealing that their version of Alan Scott, the first Green Lantern introduced back in 1940, is an openly gay man.

Up until recently, a middle aged version of Alan Scott was one of the stars of Justice Society of America, a comic series featuring the 1940s versions of DC’s heroes set in the present day. The new versions of these characters in Earth Two have all been aged down considerably, to the point that Scott’s gay superhero son Obsidian had to be sacrificed. Robinson says he was inspired to write Scott himself as a gay character to make up for that loss. “The logical leap that I made was, oh, why don’t we make Alan Scott gay?,” he says. “To DC’s credit, there wasn’t any hesitation. [Co-publisher] Dan DiDio was like ‘Oh, that’s a great idea, let’s do it!'”

Robinson’s version of Green Lantern differs from his counterpart in the regular DC Universe in ways other than his sexual orientation. “He has a ring which he uses to help manifest his powers, but he doesn’t have a lantern,” he says, noting that the mainstream Green Lanterns are members of a corp of space police who draw their energy directly from their own willpower. “He is the receptacle, the conduit for the energy of the Earth, which is this green energy.” Unlike previous versions of Scott dating back to the Forties, wood will not be a weakness for the new Green Lantern. “He is the earthly powerhouse, and when you see him in terms of his power level, he’s up there close to Superman.”

Though Marvel Comics’ gay hero Northstar is set to face some intolerance from his peers following his marriage to his long term boyfriend in the pages of Astonishing X-Men, Robinson and Scott are planning on portraying an idealized world in which Alan Scott is judged only by the quality of his character. “He doesn’t come out in issue two; he is already a gay man,” Robinson says. “Alan Scott is super-heroic, he’s super gallant, he’ll die for the earth, he’ll die for its people, he’s everything you want in a hero. I imagine he’s such a Type A character that when he realized he was gay, he was like, ‘Okay, I’m gay, now I’m just gonna go on with my life.’ He’s so accepting of it himself and he’s such a compelling person that the world knows Alan Scott’s gay. He’s such a leader, he’s such a good man, that the Justice League don’t care. And that’s a healthy depiction of a team and how it should be.”

Scott says her instructions from Robinson were to make this version of the Green Lantern as heroic as possible. “With Alan, the brief was very clear,” she says. “He needed to be a big, strapping, handsome man that everyone would instinctively follow and love. Alan strikes me as an incredibly open, honest and warm man, a natural leader and absolutely the right choice to be Guardian of the Earth. His sexuality is incidental.”

You can click through to check out a preview of Earth Two issue two, in which Alan Scott’s sexuality is revealed to the reader in a decidedly matter-of-fact sort of way. 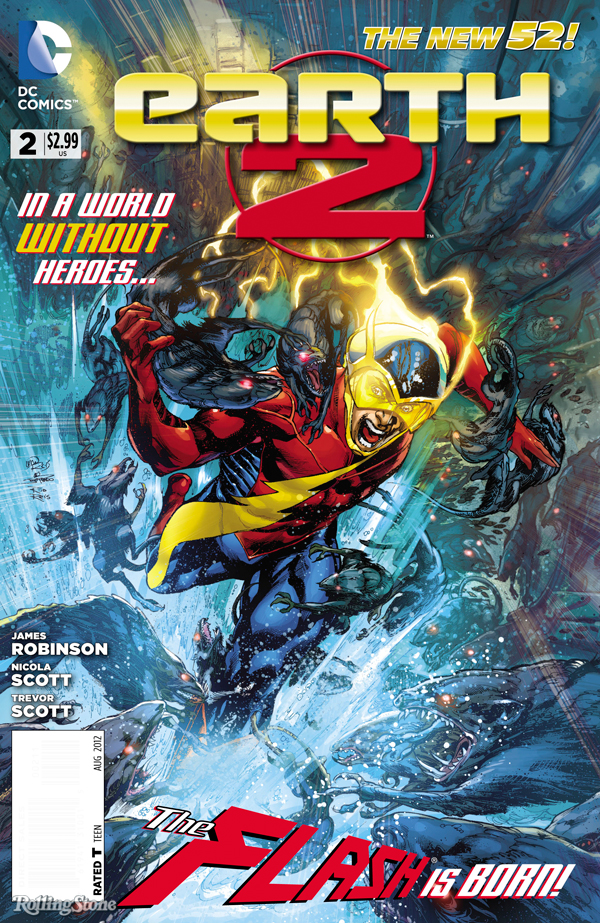